Just how left wing is the Green Party? 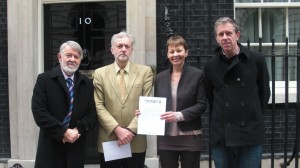 Caroline Lucas with Stop the War delegation to Downing St

The Greens are telling those calling for a discussion of a new left party that they should just join them instead. Tom Walker looks at the Green Party’s record

“There is no need to reinvent the wheel,” commented Green Party deputy leader Will Duckworth on Ken Loach’s appeal to discuss a new party of the left. “Just get behind it and push.”

He’s not the only one – Green friends of mine seem not so much angry as bemused as to why there is even a discussion on this subject at all. After all, the Green Party’s most prominent spokespeople are all left wingers. Duckworth himself is. Caroline Lucas, the party’s only MP, is one of the left’s few representatives in parliament and has a proud record of support for the anti-war movement. The Greens’ new leader Natalie Bennett is often to be found speaking at anti-cuts rallies and strikes. So what’s the problem?

Those of us outside the party often point to the record of the Greens in Germany, where the party joined a neo-liberal coalition and voted for the Afghanistan war, and in Ireland, where they joined a right wing government and cut healthcare and benefits while saying it was OK because they were creating new cycling schemes.

Against this we are told that the Green Party of England and Wales is different – the most left wing Green Party in Europe, even. Perhaps. But before we get carried away, let’s examine its record in the place where it has gained some power locally – Brighton. 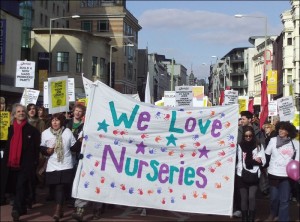 I went down to Brighton to report on the anti-cuts protest outside the Green council’s first budget-setting meeting last February. It felt like a milestone worth witnessing. What I found was a strange scene.

On one side there were local anti-cuts campaigners and trade unionists. Many told me they had voted Green and felt incredibly let down. Several were concerned about the council scrapping its mobile library – a long-running battle locally.

On the other side, though, there was a collection of Green supporters – not quite a counter-protest, but holding placards condemning the Labour Party. They told me they were “here to support our councillors”. They were handing out a leaflet defending the council’s decision to implement the cuts, which included the shameful claim that the mobile library is just too expensive.

Inside the town hall, council leader Jason Kitcat sounded in his element as he proposed the budget. As he wrote the next day, “Our budget showed up the opposition’s favourite lie, that Greens aren’t up to the job of governing.” As if governing were an end in itself.

As the Brighton Greens are a minority administration, the Labour-Tory opposition was able to band together and force them into a council tax freeze, making the cuts even worse. The Green administration could have resigned rather than implement the Labour-Tory budget – but it didn’t. After all, that wouldn’t be “responsible”.

Three weeks ago the Greens passed their second budget in Brighton. Once again Kitcat called it “the fairest possible budget for the city, despite the tough times”. But the truth is that it slashed millions of pounds from adult social care and children’s services, and over 100 jobs are likely to go. They’ve even been closing public toilets.

Of course that is not the whole story of the Green council in Brighton. As you might expect, it has been pursuing many sustainability initiatives. More significantly, it has just declared that no Brighton council tenants will be evicted if they cannot afford their rent because of the bedroom tax. And councillors have been active in supporting all sorts of other local campaigns.

But when it comes to the key issue of fighting austerity, there is scarcely even a cigarette paper between the Greens’ “fairer” cuts and Labour’s. The bogeyman of Eric Pickles’ administrators coming in and making the cuts is used to justify… making the cuts.

After the first Brighton budget, the Greens held a vote at their conference on whether it was the right to make the cuts. It wasn’t even close – two thirds backed the Brighton councillors. It was at this point that Joseph Healy, one of the founders of internal left wing grouping Green Left, quit the party on principle.

As he noted  “A few days later at the party’s national conference, despite vigorous objections from Green Left, the party voted to support the Brighton decision. Pragmatism had defeated principle, realpolitik triumphed over radicalism.

“I resigned on the same day. I saw no indication that those of us opposed to the decision would be able to remain radical opponents of the cuts agenda while our own elected members had sold the pass. I was always determined not to end up as a member of a small internal opposition in a political party which had moved away from its core principles, as happened in the Labour Party post-Blair.”

Why did he do this? It’s simple – because he’d been involved in the Irish Green Party, and he could spot the pattern. The Brighton vote was the canary in the coal mine. 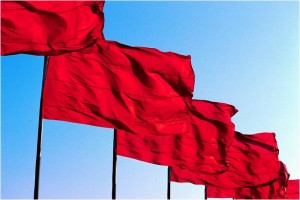 The Greens and the left

While the Green Party has many good socialist members, and some radical policies, it is not a party of the left – deliberately so. It has always included different wings of the green movement. Quite a large element of the membership are devoted to an agenda of ‘cycling and recycling’, with a narrow focus simply on environmental issues. While there are many who see themselves as part of the left, they are happy to work alongside those who use the phrase “neither left nor right” with a straight face.

Open expressions of leftism are widely seen as a turn-off to voters, and class is generally not thought relevant. The party just voted to put a commitment to “social justice” in its constitution, but that’s as far as it is willing to go. The consequences of this are that Green politicians’ positions can be all over the map. As Joseph Healy put it, “When I resigned from the party, one prominent Green told me that I had too many principles.”

Green councillors in Leeds were even part of a coalition with the Tories from 2004 until 2006. The last time I made this point in an article about a party it was about the Lib Dems during pre-election ‘Cleggmania’. I was told their local council coalitions with the Tories were a one-off and it would never happen nationally. Yeah.

Of course we’ll all work with Greens in the battles we face against austerity – and with the many people in Labour, too, who want to oppose the Tories’ destruction of everything we’ve worked for. There is too much at stake not to. But the Green Party offers no solution to the problem of working class representation, or a left alternative to the mainstream consensus. After all, if the Greens are the answer, then why are so many crying out for something new?

64 responses to “Just how left wing is the Green Party?”