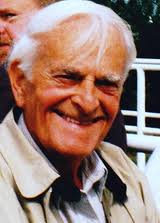 Harry Leslie Smith was born in 1923, in Barnsley Yorkshire. He is a Second World War veteran who served with the RAF. In the comment below that he left on the Ken Loach appeal post he explains what life in Britain was like before the welfare state was introduced and expresses his fears that we may return to those days.

Harry sent us this comment in allowing to repost his words.

‘Andrew: You may put the piece up and hopefully it helps get the word out about Britain before the NHS, equality for all, proper housing, and protection from want. I am enraged by the catastrophe that is befalling Europe and the world as we shuffle towards the abyss again. I have no photos from Bradford in fact the first photo I remember being taking of myself was after I got my wireless operator badge in the RAF in 1941. I have included a photo taken at the end war when I was stationed in Hamburg. It was truly a glorious spring in summer of 1945 and the joy at being alive and having survived the war, the great depression left me breathless. I have written books about my life in the late 20s and 30s as well as my post-war experiences. It was a hard go at the end war,a tough blood go but what was built was for the generations to come after mine. If you like I can send e-copies or paperbacks of my books regarding that time.
Thank-you for compliment about my writing. I am committed to using what time I have left on this earth to document the injustices and inequities suffered by my generation. I am so glad that Ken Loach made this film and what ever I can do to keep that spirit burning bright, I shall do.
Cheers,
Harry

I was born in 1923 and I turned 90 this past February. The left must act now or else so many are doomed to live my past. Lets make sure it doesn’t happen again.

It was under the cover of darkness that my family came to Bradford from Barnsley during the era that followed the General Strike. We entered this city of bright gas lights after my father, a miner, was made redundant.
Like the rest of the country’s unemployed, we took our chances and hoped guile and good fortune would lead us from the darkness of poverty towards the safety of a steady income.
“Yet, there was something else that spurred my family towards Bradford; it was my mum’s inability to accept defeat. She wasn’t prepared to lie down and let the tides of fate drown her and her brood.
“The pawnshop might own her best dresses, wedding ring and bedroom furniture, but she refused to barter away her determination to survive.
“With cunning and sex appeal, my mother insured that when we arrived in Bradford that there would be a roof over our heads and some spare shillings to keep us fed. She cajoled a landlord into letting her take charge of a doss house in exchange for free rent and a small stipend.

To my young eyes, the outside of house looked sinister and decrepit, while the interior was ripe with the heavy smell of unwashed bodies and cheap tobacco. I clung close to my father’s side as we moved into our one-room squat while my mother whispered brave clichés that this was better than the work house. My mother was always good at putting on a brave front at the beginning of our downward spiral, but it didn’t fool me. All I had to do was look at the taciturn, worried faces of the other tenants.

We were now citizens of a society inhabited by people in constant poor health, pursued by bailiffs and who were never going to have the brass to buy their way out of purgatory. Sometimes a down and out veteran of the Great War, with a game leg or gassed lungs, would show up at the front doorstep and beg admission from my mother. I’d hover behind her as she advised him of the cost to kip in this house.

Once, I witnessed an elderly couple arrive holding a lifetime of toil in a cheap cardboard suitcase. The look on their faces was resigned, as if they knew that despite how much promise their life might have started out with, it was going to end in a dirty, dark room infested with bugs. For a while, a mad woman even occupied a room. On my way to play, I’d hear her chatter to unseen ghosts behind thin white-washed walls. She sounded like a dog made senseless by cruelty.

Her faithful husband was the only one able to pacify her by speaking softly into her ear and afterwards placing cubes of sugar into her toothless mouth. While my mother commanded the lives of those lodged in this wretched house and flirted with the fit, Irish workers, my father escaped this harsh new reality by taking long walks across Bradford. He hoped that on his travels he’d find another job, but there were no positions for a miner too old for the pits and too young for the grave.
Short of money, my mother accepted the harsh generosity of St Vincent de Paul’s to clothe her children. We now wore the uniform of mendicants: rough hewn corduroy trousers for boys and heavy smocks for girls.

My father found me crying one day, for our lost life, and tried to dispel my terror by letting me ride on his shoulders, while we walked to a stall that sold mushy peas for a penny a plate. 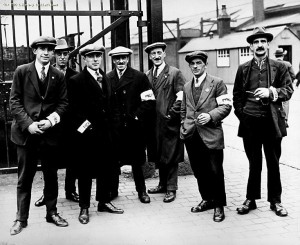 To remind us that there was beauty, even in this city of looms, grit and grime, he took us to Manningham Park.

On the day we went, it didn’t matter to me how dusty and desperate we looked, because for a few short hours we were free from the doss house and its misery. My sister and I scampered and scattered across the lawns. We climbed on top the stone cylinders that dotted the sides of the walk way. As the financial conditions of the world grew more severe, my mother lost her position at the doss house and we were compelled to move into more squalid digs. At the age of seven, I was put to work as a beer barrow boy.