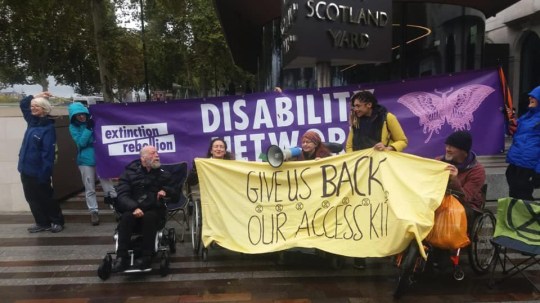 “The past week has been a moment in history: to simply list the thousands of arrests, the many tens of thousands undertaking civil disobedience, would not do it justice. We have proven to the world that this rebellion is a truly global movement, growing rapidly within and between nations, and comprised of people with the selflessness, the creativity and the courage to resist the madness of this ecocidal system.” – Extinction Rebellion

On the 7th October 2019 Extinction Rebellion launched its biggest global wave of non-violent civil disobedience against what they see as utter complacency regarding the climate emergency by world leaders. It is important to recognise that this is a social movement unlike any other; not only is it a global movement, it also has a transformative agenda. At this moment in time, we want to focus not so much on the nature of Extinction Rebellion, but rather our involvement in the recent events. As experienced disabled activists, we entered Extinction Rebellion because we saw the issues around climate change and the ecological crisis as vital aspects of disabled people’s struggle for emancipation. Already in the Global South, disabled people have felt the full brunt of climate change, therefore we understand the ecological crisis unless checked will cause disabled people to be among the groups most affected.

We are part of our local Extinction Rebellion group, but as equally important, is the fact that we joined the Network of Disabled Rebels inside the national movement. The Network saw the need to work with disabled people and Extinction Rebellion to make the October event as inclusive as possible. Not long after the April Rebellion ended, disabled rebels begun planning for October. We reported that:

“Disabled Rebels have been working to provide accessible toilets on activity sites, providing training for stewards around disability related issues and organising a Disability Hub where disabled people can go for information, advice and support. Engaging in a rebellion isn’t without risks, therefore, the Rebels have been working alongside Deaf Rebels to develop specific British Sign Language signs for Deaf people and XR Legal Team in order to ensure they can communicate if a threat of arrest develops.”

The weekend before the Rebellion was launched, the police raided a XR warehouse and confiscated thousands of pounds of equipment; much of this equipment was purchased to assist disabled people’s ability to participate in the Rebellion. The police argue this was done to prevent illegal activity; however, we argue that the police’s action prevented disabled people’s right to protest. Many disabled people were denied equipment which would have allowed them to be beside their nondisabled rebels; the seizing of the equipment did not halt the Rebellion, but disproportionately impacted upon disabled rebels. To add insult to injury, when accessible toilets were taken to sites, the police first gave permission to drop them, but once dropped, they arrested the drivers and towed them away.

Disabled Rebels believe their human rights have been denied them by institutionalised disablism. Disabled people’s social oppression is conducted through the structures, systems and processes which keep them excluded from or marginalised within mainstream activities. The seizure of the equipment resulted in us having nowhere to sleep or use the toilet. We were forced to book alternative accommodation and struggle with hostile environments. To our horror, the accessible lift at Westminster was broken, we were allowed to use the emergency one now and again, but there was one time when we were denied access and had to take two trains to reach an accessible stop!

During the first week of the Rebellion, we met with other disabled people and made a number of statements on social media. It was also agreed to hold a peaceful protest at New Scotland Yard on the Friday. At the protest, just like the incident with the loos, we were informed that we could go ahead but very quickly the police became heavy. The small group of disabled rebels and allies chanted for a while before asking two representatives to go and put our demand for our equipment to be returned. Within minutes officers cited section fourteen of the Public Order Act and threatened us with arrest. One of our number continued to chant and was immediately seized. The representatives were approached and told to leave for Trafalgar Square or risk being arrested. Two other disabled rebels were arrested, one for not moving and the other when they went to address the support needs of the arrestee. Two days later hundreds of nondisabled rebels supported a solidarity march to New Scotland Yard; nothing quite this has ever been seen before. It was a very moving event as it was streamed live and disabled rebels addressed the crowd, explaining our oppression and the impact of austerity on the lives of disabled people.

The week also saw a Paralympian climb on top of a plane, police throwing a wheelchair on top of seized material and disabled rebels leaving a lasting impression on nondisabled rebels. Our overall impression was that disabled rebels were given mixed messages by Extinction Rebellion; our support was inadequate and like many sections of the Left, they remain ignorant of our access needs and the disabling barriers disabled people encounter, but at the same time when confronted by our disquiet, there were positive responses. The harsh treatment of the police was a wake up call for many at the Rebellion and the politics of the situation are finally coming to the fore. It is no longer sustainable to argue the movement is “above politics”; it is impossible to understand or address the ecological crisis without dealing with the global role played by capitalism or how the State will respond in the interest of Capital.