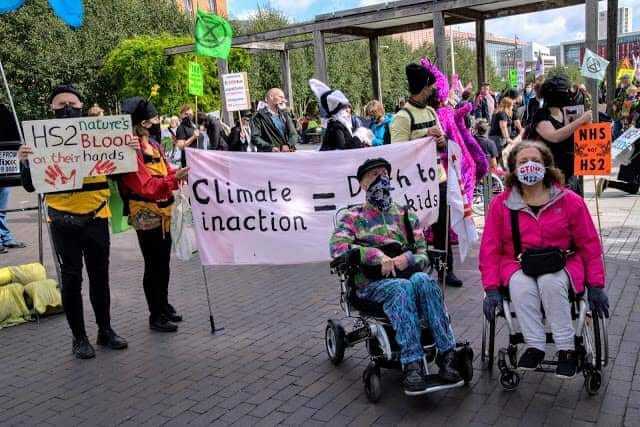 Sandra Daniels and Bob Williams-Findlay on the protest

Bob Whitehead writes from Birmingham: The third Extinction Rebellion begins on Tuesday in London, Cardiff and Manchester. There will be separate plans for Scotland.

As a warm-up after long periods of virus-enforced inactivity, local actions have already begun, and Midlands XR held anti-HS2 actions in Birmingham yesterday. After assembling in Eastside Park next to the HS2 terminal building site, everyone took the knee and then there were speeches before marching off through the city centre to 2 Snow Hill, the local HQ of the HS2 project. There was then a die-in outside the entrance, chanting (Shame on You), and a return to Eastside Park for a picnic and preparation of more flags and banners. Meanwhile, a group of XR activists paid a visit inside the construction site and immobilised diggers by climbing onto them. After being eventually ejected there were fortunately no arrests. There was brief coverage of the event on local TV. 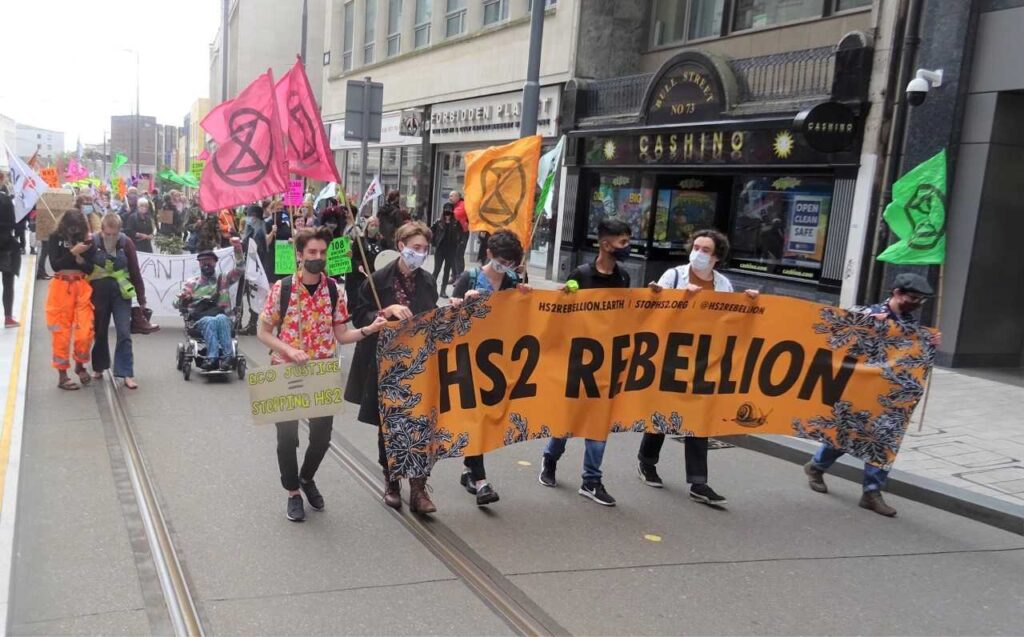 The flyer given out to the public stated:

• ‘It is the poster child of a dangerously unjust system.

• The government claims HS2 will better connect people, especially in the north of England, but communities in the north were never asked. Most want better local services, not another unaffordable train line to London.

• HS2 will not be carbon neutral in its 120-year life span. As we head towards the 6th global extinction, our actions in the Global North will disproportionately affect Black and Indigenous People of Colour, especially in the Global South.

• HS2 is an express delivery service for massive airport expansion. Birmingham Airport is already spending £500 million to expand, thanks to HS2.

As an aside, Birmingham City Council now plans to abandon its agreed target of going carbon neutral by 2030 in favour of 2041. Its plans, such as they are, make no mention of curbing aviation or HS2.

“Yesterday’s action was a mass coming together of Midlands XR groups to highlight the devastation of HS2 on the countryside, animals and the people in its path.

108 ancient woodlands along the HS2‘s route will or already have receive loss or damage.

There is also the complete waste of money of HS2 to consider, its going to be expensive to travel on HS2, so will not be financially viable for most people, and all this for 20 minutes faster traveling time.

HS2 is an example of how capitalist greed is destroying our planet.”