Why was the atomic bomb dropped on Hiroshima? 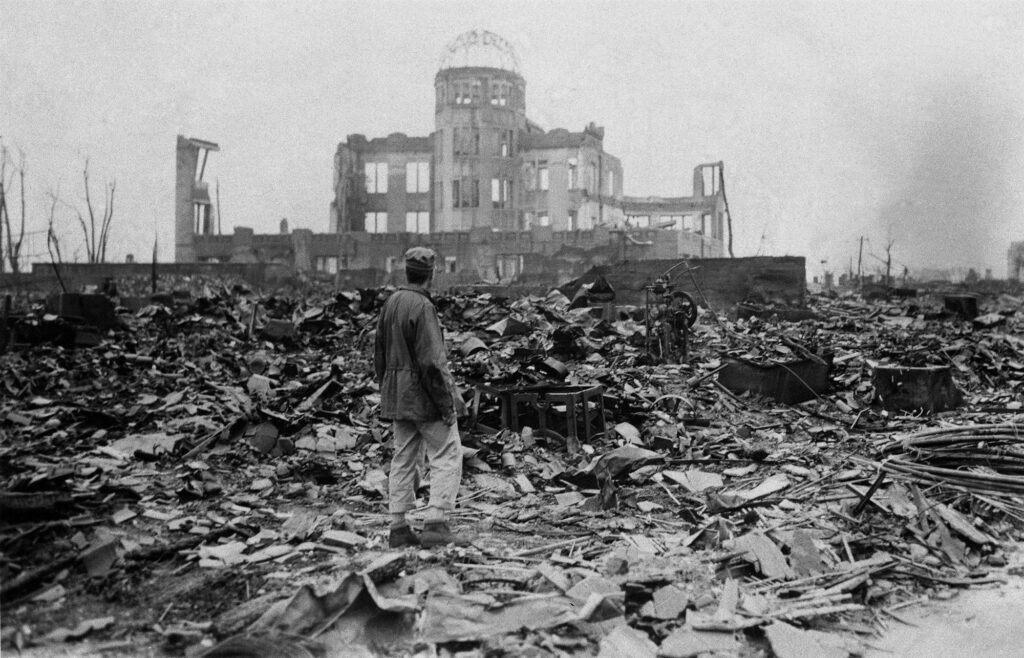 The United States dropped the first atomic bomb on Hiroshima 75 years ago today. It remains an act of barbarism unparalleled in the history of war – and its use was never a necessity.

Kate Hudson writes: The city of Hiroshima stands on a flat river delta on the Japanese mainland, Honshu. At quarter past eight on the morning of August 6th 1945, the US plane Enola Gay dropped an atomic bomb on the city centre, a busy residential and business district, crowded with people going about their daily business. The bomb, called ‘Little Boy’ because of its long, thin shape, was made from uranium-235. Unimpeded by hills or natural features to limit the blast, the fireball created by that single bomb destroyed 13 square kilometres of the city.

The heart of the explosion reached a temperature of several million degrees centigrade, resulting in a heat flash over a wide area, vaporising all human tissue. Within a radius of half a mile of the centre of the blast, every person was killed. All that was left of people caught out in the open were their shadows burnt into stone. Beyond this central area, people were killed by the heat and blast waves, either out in the open or inside buildings collapsing and bursting into flame. In this area the immediate death rate was over 90 per cent.

The firestorm created hurricane-force winds, spreading and intensifying the fire. Almost 63 per cent of the buildings of Hiroshima were completely destroyed and nearly 92 per cent of the structures in the city were either destroyed or damaged by the blast and fire. The total number of deaths was hard to establish, but at least 75,000 died in the first hours after the bomb was dropped, with around 140,000 dead by December 1945. The death toll reached around 200,000 by the end of 1950.

Many of those who survived the immediate blast died shortly afterwards from fatal burns. Others with possibly less fatal injuries died because of the breakdown of rescue and medical services, much of which had been destroyed, with personnel themselves killed. Within two or three days, radiation victims who were near the hypocentre developed symptoms such as nausea, vomiting, bloody diarrhoea and hair loss. Most died within a week. Radiation victims further away from the explosion developed symptoms one to four weeks after the explosion.

Many survivors – known in Japanese as hibakusha – still suffer to this day from the impact of radiation. Pregnant women who survived the bomb faced additional horrors, for the bomb had a terrible impact on a foetus. Many were stillborn, but those born alive faced higher infant mortality rates than normal, or had abnormally small skulls, often suffering from mental disabilities. From about 1960 a higher rate of cancer became evident, in particular of the thyroid, breast, lung and salivary gland. Radiation is known to cause many types of cancer, and Japanese scientific research has now shown a direct correlation between the distance from the atomic bomb hypocentre, the probable exposure dose of radiation and cancer rates.

Conventional wisdom about the dropping of the atomic bomb on Japan is that it was necessary in order to bring about a speedy conclusion to the war and save lives. Even today many people genuinely believe that the bomb was necessary to bring about a Japanese surrender and to avoid the need for an invasion of Japan by the US, which might have cost hundreds of thousands of lives. But extensive scholarly research in the US, using primary sources from the time, shows that this just wasn’t true.

A significant factor in the decision was the United States’ desire to establish its dominance in the region after the war. Those planning for the postwar situation believed that this required US occupation of Japan, enabling it to establish a permanent military presence, shape its political and economic system and dominate the Pacific region without fear of Japanese resurgence. But Japanese resurgence was no longer the US’s key strategic concern; its main concern above all, was the Soviet Union in the postwar world, both in Asia and in Europe.

The Soviet Union was the US’ wartime ally against Germany. Ultimately, of course, their economic systems were incompatible; the US would not accept that any part of the world economy should be closed to it, and those seeking an alternative to the market economic model of the US tended to look to the Soviet Union. This looming antagonism was heightened by the increased power and prestige of the Soviet Union following its role in breaking the back of Germany’s military machine. The US consequently wished to prevent a Soviet advance in Asia and subsequent Soviet influence on Japan.

One is forced to conclude that the US wanted to demonstrate its unique military power – its possession of the atomic bomb – in order to gain political and diplomatic advantage over the Soviet Union in the postwar settlement. As US historian Gar Alperovitz observes:

Modern research findings clearly demonstrate that from April 1945 on, top American officials calculated that using the atomic bomb would enormously bolster US diplomacy vis-a-vis the Soviet Union in negotiations over both postwar Europe and Asia. The atomic bomb was not, in fact, initially brought to Truman’s attention because of its relationship to the war against Japan, but because of its likely impact on diplomacy.

While many leading US politicians, diplomats and military figures thought it unnecessary to bomb Japan, the group around US president Harry S. Truman, pressed strongly for it. Secretary of War Henry Stimson, for example, described the atom bomb as the ‘master card’ in US diplomacy towards the Soviet Union.

By early 1945 it was clear that while the Japanese government was not offering ‘unconditional surrender,’ it was nevertheless seeking a negotiated surrender, through the neutral Soviet Union.  Its condition was that the position of the Japanese Emperor Hirohito would be maintained without loss of face. A possible scenario would have been altering his role to that of constitutional monarch and ensuring his exemption from war crimes charges – charges that could have led to his execution, as they did with many leaders of Nazi Germany.

There was general agreement amongst the Western leaders that this would be an acceptable approach, but this position was not conveyed to the Japanese government. Indeed, records indicate that President Truman kept this out of the Potsdam declaration – the postwar settlement that the Great Powers worked on – because the US A-bomb test at Alamogordo had just been successfully concluded. The US leadership did not inform the Japanese that its surrender terms were more or less acceptable, because it needed an excuse to use the bomb in order to demonstrate its awesome power in a world where only the US was in possession of this weapon. Its only opportunity to do so was before the Japanese surrendered.

The Soviet Union had promised to enter the war on Japan three months after the end of the war in Europe. That day was rapidly approaching and the US had two reasons for wishing to use the bomb before this took place. Firstly, there was every likelihood that Soviet entry into the war would trigger a Japanese surrender, thus removing any justification for using the atom bomb. Secondly, the US wished to prevent any possibility that the Soviet Union would occupy Japan whilst the US troops were still far away and so consolidate Soviet influence.

So, the US dropped the first atomic bomb on the city of Hiroshima on August 6th – 75 years ago today. On August 9th the Soviet Union entered the war in Asia, as promised. Later the same day, before Japan had had time to grasp and respond to the ghastly results of the Hiroshima bomb, the US dropped a second bomb on the city of Nagasaki. The US government got what it wanted, but at the most appalling human cost.

On August 10th, the Japanese government surrendered and accepted US occupation. In return, the US now accepted Japanese conditions regarding Emperor Hirohito – that they wanted to retain their Emperor without fear of war crime charges. The formal surrender was signed on September 2nd, 1945. The terms of surrender were no different to those that the Japanese had offered before the bombing; exactly the same ends could have been achieved without the atomic bombing.

But now the US had secured the occupation of Japan and had demonstrated its ‘master card’ in the new world of atomic diplomacy. Washington had shown the world – and in particular the Soviet Union – in no uncertain terms that it had a weapon of unique and devastating power, and that it was prepared to use it.

Kate Hudson is General Scretary of the Campaign for Nuclear Disarmament

This article was first published in Tribune

4 responses to “Why was the atomic bomb dropped on Hiroshima?”