What’s the real cause of California’s wildfire disaster? 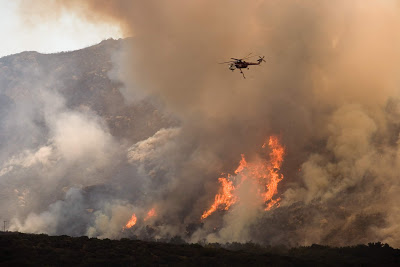 Things are getting serious, writes Phil Hearse. At least 31 dead and maybe 200 missing. Thousands of homes and businesses burned down. And three raging fires, one in the north of the sate and two in the south, are still not under control. There are scenes that could be the aftermath of an American or Russian bombing raid in the Middle East – bodies littered on the ground, people burned to death in their cars, families devastated with grief at the loss of homes and loved ones.

Donald Trump chimed in on the line propagated by Fox News for weeks. It’s because of bad forest management by California, a state that’s – by American standards – liberal and anti-Trump. Fox even claimed it was because the people running California were ‘socialists’(!)

In the world of Instagram thing are even more serious – Actor Gerald Butler and singers Miley Cyrus and Robin Thicke have had their houses burned down. Luxury houses on the Malibu beachfront have been destroyed. Trump’s response has been criticised by Katy Perry, Leonardo di Caprio and Neil Young. Kim Kardashian, Lady Gaga and Kanye West have had to be evacuated (can this disaster get any worse?).

When Trump says in his brief tweets that it’s because of poor forest management he is forgetting that 60% of California forest is under federal management. Bad forest management is not the underlying cause. Leonardo di Caprio said it was because of climate change. That’s part of the story, but not the whole issue.

Fires in the California forests and chaparral (shrubland) are regular natural events. Because of global warming they are becoming more regular, and more likely outside of the hottest times of the year. Chaparral has a high-intensity regime, ‘meaning when a fire burns, it burns everything, frequently leaving behind an ashen landscape.’ (1)

According to Ben Engel:

Mike Davis (3), one of the most articulate and insightful socialist writers we have today, has made similar points many times, blaming what he calls ‘real estate capitalism’. In October 2017, a year before the current diesters, he said:

‘Although the explosive development of this firestorm complex caught county and municipal officials off guard, fire alarms had been going off for months. Two years ago [ie in 2015 – ed], at the height of California’s worst drought in five hundred years, the Valley Fire, ignited by faulty wiring in a hot tub, burned 76,000 acres and destroyed 1350 homes in Lake, northern Sonoma, and Napa counties. Last winter’s [2016] record precipitation, meanwhile, did not so much bust the drought as prepare its second and more dangerous reincarnation. The spring’s unforgettable profusion of wildflowers and verdant grasses was punctually followed by a scorching summer that culminated in September with pavement-melting temperatures of 41ºC in San Francisco and 43ºC on the coast at Santa Cruz. Luxuriant green vegetation quickly turned into parched brown fire-starter.’

‘The final ingredient in this “perfect fire” scenario – as in past fire catastrophes in Northern California – was the arrival of the hot, dry offshore winds, with gusts between 50 and 70 mph, that scourge the California coast every year in the weeks before Halloween, sometimes continuing into December. The Diablos are the Bay Area’s upscale version of Southern California’s autumn mini-hurricanes, the Santa Anas. In October 1991, they turned a small grass fire near the Caldecott Tunnel in the Oakland Hills into an inferno that killed 25 people and destroyed almost 4000 homes and apartments.’

Underlying this is real estate capitalism, ‘the financial and real-estate juggernaut that drives the suburbanisation of our increasingly inflammable wildlands’. Moreover:

‘This is the deadly conceit behind mainstream environmental politics in California: you say fire, I say climate change, and we both ignore the financial and real-estate juggernaut that drives the suburbanisation of our increasingly inflammable wildlands. Land use patterns in California have long been insane but, with negligible opposition, they reproduce themselves like a flesh-eating virus. After the Tunnel Fire in Oakland and the 2003 and 2007 firestorms in San Diego County, paradise was quickly restored; in fact, the replacement homes were larger and grander than the originals. The East Bay implemented some sensible reforms but in rural San Diego County, the Republican majority voted down a modest tax increase to hire more firefighters. The learning curve has a negative slope.

‘I’ve found that the easiest way to explain California fire politics to students or visitors from the other blue coast is to take them to see the small community of Carveacre in the rugged mountains east of San Diego. After less than a mile, a narrow paved road splays into rutted dirt tracks leading to thirty or forty impressive homes. The attractions are obvious: families with broods can afford large homes as well as dirt bikes, horses, dogs, and the occasional emu or llama. At night, stars twinkle that haven’t been visible in San Diego, 35 miles away, for almost a century. The vistas are magnificent and the mild winters usually mantle the mountain chaparral with a magical coating of light snow.

‘But Carveacre on a hot, high fire-danger day scares the shit out of me. A mountainside cul-de-sac at the end of a one-lane road with scattered houses surrounded by ripe-to-burn vegetation – the “fuel load” of chaparral in California is calculated in equivalent barrels of crude oil – the place confounds human intelligence. It’s a rustic version of death row. Much as I would like for once to be a bearer of good news rather than an elderly prophet of doom, Carveacre demonstrates the hopelessness of rational planning in a society based on real-estate capitalism. Unnecessarily, our children, and theirs, will continue to face the flames.’

12 November 2018
To submit an article for the 'Discussion & Debate' section of our website please email it to info@leftunity.org