Welcome to the world of Apple 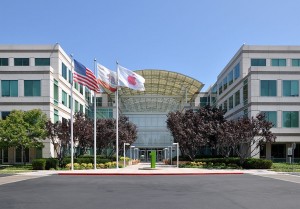 The ruling by EU competition commissioner Margarethe Vestager that Apple should pay the Irish government €13.2 bn, because the derisory 2% tax charged on Apple profits was ‘unfair’ to other companies, reveals just a tiny corner of the tax, labour and political practices of the world’s most profitable company. Apple practice is the gold standard of multinational super-exploitation that modern neoliberal corporations aspire to. How Apple functions is closely mirrored by the practice s of transnational corporations like Google, McDonalds, Amazon, Starbucks, Fiat Chrysler and many others.

Critics of Vestager – like Apple boss Tim Cook, Ryanair supremo Michael O’Leary and former EU competition commissioner Neelie Kroes (who now works for tax evader Uber) – say she is wrong because the Irish government should be able to determine its own tax rates. The main point however is that Apple was able to aggregate all its profits in Europe, Asia and Africa – most of the world outside the US – in its Ireland subsidiary to benefit from ultra-low tax rates. The Irish government was a co-conspirator in a worldwide scam, ripping off governments and citizens internationally

But Apple’s tax prestidigitation goes way beyond this. Huge chunks of the profit funnelled through Ireland were deemed to be deposited in its ‘headquarters’, a purely mythical institution, and thus not subject to tax in any jurisdiction. But the tax dodgery goes deeper and further.
According to a US Senate Report, Apple shifted billions out of US tax jurisdiction to low or no-tax states by using shell companies (1). The scam works like this. Apple create ‘shell’ subsidiaries overseas, to which they transfer intellectual property rights. So Apple has to pay a big license fee – a huge one – to its subsidiary in a low tax state for the privilege of producing its own products. This license fee is in fact a big chunk of its US (and other) profits, which now escape the clutches of any tax authority that has a significant rate of corporation tax.
Of course there are many other ways for Apple and other big companies to hide profits in offshore tax havens and many of them are detailed in the Senate report. But the profits have to be created in the first place. Apple has a cash pile of at least $102bn. That requires high prices for premium products. Although the iPhone has been overtaken in unit numbers sold by competitors, it still garners between 80% and 90% of smart phone profits. It is the most profitable product in the history of capitalism, having netted the company at least $200bn in sales and over $100bn in profits.

But such profits require low wages for production workers. All Apple’s iPhones and iPads are made in China, where Apple has transferred a lot of its production to a company called Pegatron. The Daily Mail (11 May 2016) has revealed the appalling factory and dormitory conditions where thousands of workers live and work in Shanghai: 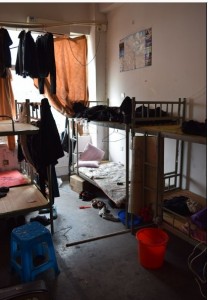 “Paid basic salaries of just under £250 a month for gruelling six-day weeks which they can increase by about £200 by working daily overtime, nearly all workers are migrants from China’s poorest provinces who live year-round in grim factory dorms.

“MailOnline found rooms with up to 12 bunk beds for which each worker would be charged the equivalent of £16 a month, deducted from their pay packets. Pegatron insisted only eight workers lived in each room. Even when empty, there is barely space in the rooms for anything other than the bunk beds and workers’ metal lockers and there are no washing or toilet facilities in any of the dorms.

“…There is a similar, stark lack of privacy in shared toilet blocks on each floor where squatting cubicles are positioned above open sewerage drains running the length of the toilet block, and in washrooms with long rows of wash basins.”

The dormitory block seen by the Mail has been mothballed as production declined, but Pegatron has other similar facilities housing 50,000 workers in Shanghai, where it shares Apple production with Foxconn. Foxconn itself has been the subject of repeated reports of wages as low as £1.12 an hour and a work routine that has driven dozens of workers to suicide. (2)

Apple’s anti-social effects hit closer to home in San Francisco, where most of the workers at its Cupertino headquarters (the real one not the tax myth) are situated. Apple is just a spit from Mountain View headquarters of Google.

Huge private buses with blacked out windows pick up Apple employees and drive them to the Cupertino dreamworks. The buses are symbolic of the divide between rich and poor in the San Francisco Bay Area. Spencer Michels says: “Every weekday morning, between 7:30 and 10:00, dozens of big, sleek buses roll down Valencia Street in the heart of San Francisco’s traditionally Latino Mission District and other city thoroughfares. 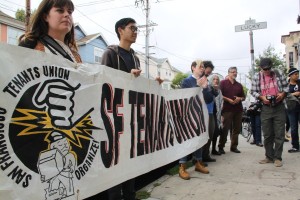 “Using bus stops created for city buses, the private coaches pick up a cargo of workers who for the most part have moved into the city and work 30 or 40 miles south of it at places like Google, Facebook, Apple, eBay and Yahoo! The free buses, generally referred to as Google Buses, are one of the perks for high-tech workers in high demand in Silicon Valley… Critics say the buses are clogging city bus stops. And while the tech companies have recently agreed to pay the city a dollar per bus per stop for their use, the critics say it isn’t enough to make up for the congestion they cause. So feelings are raw.”

Erin McElroy of the San Francisco Tenants’ Union says: “The real issue is gentrification and the systemic displacement of longtime residents in San Francisco, and what’s happening is that people are being displaced by a particular political economy that’s benefiting from the money that tech is bringing into the city. The city is no longer a place that if you’re poor working-class, even middle class, that you can afford to live in.” (3)
The people who work for the tech companies in Silicon Valley are not exactly part of the capitalist class, but they are an elite. A typical Apple software engineer will earn between $100,000 and $200,000 – but many others earn more. They are part of a highly privileged, salaried middle class which is driving out the working class and gutting social diversity.

According to Zoë Corbyn: “The median household income of the San Francisco Bay Area is now higher than anywhere else in America, and San Francisco has twice as many billionaires per capita as London …The median monthly rent is already the highest in the country and is still increasing at a rate three times the national average. Based on official figures from the San Francisco Rent Board, the San Francisco Tenants Union estimates that no-fault evictions displaced nearly 1,400 renters in 2013… There are also untold numbers who have left the area after accepting buyouts.” (4)

Corporate scandals this year have demonstrated vividly the facts about modern capitalism. Sir Philip Green’s family pay no taxes in the UK while they take more than £400m out of BHS, and then pass on the company with a wrecked pension scheme. Google’s giant avoidance of UK tax was rewarded by George Osborne with a sweetheart deal to which saw them pay a ludicrous £100m on the many billions they earned in the UK between 2005-14. And perhaps most dramatic, the Panama Papers scandal showed how the rich and powerful worldwide hide their wealth from public scrutiny inn general and tax authorities in particular.

Of course there’s nothing inherently more evil about US companies. According to the Sunday Times six out of the UK’s ten largest companies paid no corporation tax in 20014. This included Lloyds Banking Group, Vodaphone, HSBC, Diageo, Shell, BP’s four biggest subsidiaries and big pharma company AstraZeneca. (5)

Australian journalist Michael West in his Oligarchs of the Treasure Islands show how tax avoidance is facilitated particularly by British based global accountancy firms, PWC, Deloitte, Ernst and Young and KPMG.

That’s the way modern capitalism works. Pay no taxes, super-exploit workers in the third world, charge high prices and see your workers participate in super-gentrification which is driving out the poor and cultural diversity. Welcome to the world of Apple.