Towards a genuinely Free Press 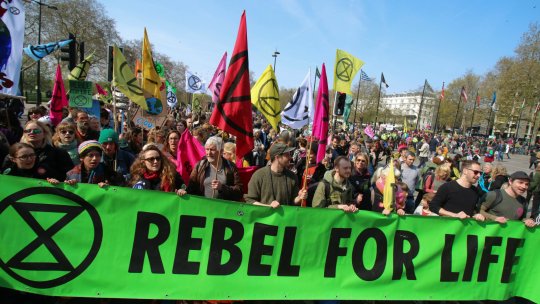 On Friday 4th September, members of Extinction Rebellion blockaded Murdoch’s printing presses and stopped the distribution of the Sun and other News International newspapers.

It is one of a series of actions  as part of its September Rebellion that Extinction Rebellion are carrying out to highlight the lack of serious action to stop irreversible environmental damage and climate change.

Extinction Rebellion is mobilising tens of thousands of protesters in a wide range of direct actions across the country. Hundreds of campaigners have been arrested and several have been detained in pre-emptive raids by the state and are in prison already.

The attempt to shut down theMurdoch press is to be applauded. The establishment has tried to present the action against the Murdoch press as an attack on press freedom. As Extinction Rebellion tweeted ‘Delaying the printed news by 3 hours? Or delaying action on a global emergency by 30 years? Where is the crime? Suddenly our politicians are up in arms over a free press. Where were they when our “free press” was being bought up by billionaires?’

The real threat to press freedom in this country comes from Boris Johnson and the UK government which has been formally warned for threatening press freedom after it blacklisted a group of investigative journalists and denied them access to information. The Council of Europe issued the Level 2 “media freedom alert” after Ministry of Defence press officers refused to deal with Declassified UK, a website focusing on foreign and defence policy stories.

The Murdoch newspapers are little more than propaganda rags for the ruling class. We remember the demonisation of Liverpool football supporters after the Hillsborough tragedy. The sales of the Sun have never recovered in Liverpool. We also remember the action that the print unions took when the Sun tried to portray miners’ leader Arthur Scargill as a fascist. The Sun wanted to print a photo of Scargill supposedly giving a fascist salute with the heading ‘Mine Fuhrer’. The print unions stopped that. See photos below. 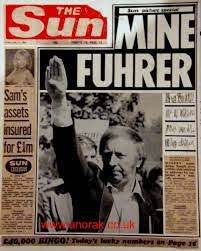 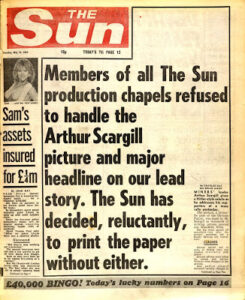 The most worrying aspect of the response to the Extinction Rebellion action however is not the condemnation from Boris Johnson but the kow-towing of the Labour Party to the Murdoch Press. Labour has a long history of this. Blair flew half around the world to cosy up to Murdoch and News International executives in order to win the backing of his newspapers. For too long the billionaire-owned press in this country has had an undue influence on our politics.

The Labour Party responded to the Extinction Rebellion action with the following statement “A free press is vital for our democracy. People have the right to read the newspapers they want. Stopping them from being distributed and printers from doing their jobs is wrong.”

And the party pressured left MPs who had tweeted in support of Extinction Rebellion to delete their tweets which they did do.

If anybody needs reminding of the fact that there is no political future for the left in the “People’s Party” this sums it up. This is a critical moment for humanity. We face not just climate change and environmental destruction but economic collapse, pandemic and the potential for serious armed conflict between the great powers. Left Unity exists to support the struggle for a new society – we must find a way forward collectively.