The wearing of the Greens – Irish Greens enter new government 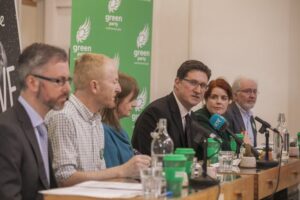 Joseph Healy writes: Back in 2009 I wrote an article about the Irish Green Party and its role in the Fianna Fail-led coalition government 2007-11 where I predicted the imminent fall of the Greens as the price they would pay for selling out both their members and voters. This came to pass a year later when they lost all of their TDs (MPs) in the Dail (the Irish parliament) and were reduced to becoming a nonentity in the Irish political scene. They had been unlucky enough to be in power when the economic crisis hit Ireland in 2008, resulting in huge economic collapse and mass emigration. However, they had signed up to the full austerity programme implemented by the coalition government where they had 7 ministers but had also sold out many of their supporters on environmental issues. There was a huge sense of anger and disillusionment with the party following the 2011 general election and they remained marginal for several years.

However, the party never really took on board its defeat in 2011 and Eamon Ryan, who had been one of the ministers in the coalition government and one of the architects of its coalition policy, became the party leader. Here there are some parallels with the Lib Dems who have also never really learnt the lessons from their coalition experience of 2010 to 2015. Ryan ploughed a lone furrow after 2011 concentrating on the party’s links with more successful Green parties in continental Europe and being feted by sections of the Irish media, particularly the Irish Times. Ryan and his much reduced Green Party continued to argue vociferously that the climate crisis meant that the Greens must have a voice in the Dail and that he would be prepared to enter government with anyone who offered them power as time was essential to saving the planet and ideology was unimportant. This was essentially a repetition of the Green mantra “neither Left nor Right”.

Fine Gael were in government from 2011 and continued a right wing pro-austerity policy which led to massive levels of homelessness, particularly in Dublin, and a continuation of the policy of basing Ireland’s economic policy on very low corporation tax and having Ireland as an offshore European base for US corporations, especially IT companies such as Google and Facebook. Although this kept employment levels high – Ireland did not experience the high youth unemployment figures seen in Southern Europe – it led to a low wage economy hugely reliant on tourism and the hospitality sector and a sharp rise in housing costs, particularly in Dublin, where a third of the population of the Republic live. There were large social movements fighting this, particularly the campaign against water charges, but generally the Irish Left remained weak and divided. It is interesting that the Greens supported the water charges on environmental grounds but ignored the economic impact on poorer sections of Irish society which is where most of the resistance came from.

As the climate crisis grew more evident and received greater coverage in both Irish and UK media (which much of the Irish public consumes) support for the Greens began to increase. There was also much comment that a new wave of younger and more radical members, including many from the Extinction Rebellion movement had joined the party and many of these wanted the Greens to move to the Left and support a more radical economic and social agenda as opposed to the older members who still regarded themselves as environmentalists and nothing more. This led to some tension in the party and the most outspoken leading Green Saoirse Mc Hugh, who hails from Mayo in the west of Ireland increasingly appealed to the new members to take the party in a different direction.

The Irish Left has traditionally been weak and divided. Usually the combined support for the Left has been about 30% with 70% opting for the traditional right wing parties Fianna Fail and Fine Gael. Sinn Fein has gradually grown stronger in the Republic, particularly with younger voters, especially as the history of the party’s involvement in the struggle in the North of Ireland has faded from voters memories. However, the European elections in 2019 came as a huge shock to the Left with the Greens picking up European seats and Sinn Fein losing MEPs. The Greens had appealed to their links with the European Greens, widely perceived as a growing force in the EU and as the main supporters of the struggle against climate change and for sustainable economies. This came as a huge shock for Sinn Fein. The Irish Labour Party having entered coalition with Fine Gael and having been seen as a major enforcer of austerity politics had been reduced to a rump in the previous general election and is widely perceived as not being part of the Irish Left.

On the eve of the Irish general election in February this year, the Greens were perceived as being one of the main potential winners. Clearly they would not surpass the vote of the two main parties but could emerge as kingmakers in any potential coalition government. There was a clear demand for change in this election and the Greens presented themselves as part of that agenda for change. The two traditional parties, Fine Gael and Fianna Fail,, who had ruled the Irish state since its foundation were seen as the problem and the parties of the Left called for a joint effort to remove them. The Irish electoral system is based on the Single Transferrable Vote (STV) form of PR and the Left parties called on all of those who were voting for change to “transfer Left”. Many voters took this to refer to the Greens also, especially younger voters. Sinn Fein, not expecting to do well in the election, did not contest all seats and had less candidates than usual. The Greens benefited from the Left transfers.

Following the election in February, months of political haggling followed. The right wing parties made clear that their red line was entering any coalition which included Sinn Fein. Sinn Fein, on the other hand, called for a Left coalition of smaller parties and possibly the Greens. This left the Greens as the kingmakers in any potential coalition. The media speculated that with so many new members, many of whom were connected with XR and other movements, that the members would not vote to enter coalition with the right wing parties. What they underestimated was the thirst for power of the leadership and their media allies.

The Programme for Government, negotiated between Fianna Fail, Fine Gael and the Greens, was essentially a “business as usual” capitalist accord with environmental trimmings. The Greens were offered several ministries and a promise of a carbon reduction of 7% as well as the ending of the hated Direct Provision system of holding refugees in detention centres, in order to appeal to the party’s Left wing base. Saoirse Mc Hugh and several prominent Left Greens urged a rejection of the Programme for Government and said it “had got green fingerprints throughout it but it’s green fingerprints on a very blue canvas”. The Programme needed to be supported by two thirds of the party’s membership in order to pass. The party’s power hungry leadership, urged on by Ryan, organised a webinar with Mark Ruffalo, the Hollywood actor, known in the US for opposing fracking, where he called on the party’s membership to back the deal, echoing Ryan’s view that there was no time for squeamishness and ideological purity when the planet needed saving. Much of the Irish media speculated that the party’s membership might not back the deal and that the two thirds majority would be hard to achieve. The same media, including the well known journalist Fintan O’Toole, called on the Greens to accept the deal as the only hope for Ireland achieving a stable and progressive government.

In the event a higher percentage of Greens voted for the Programme for Government (76%) than members of the two right wing parties did. This was a huge blow to the hopes of many young Irish voters and the Left accused the Greens of treachery and of having misused the electoral transfers which they had benefited from under the transfer for change policy. It is certainly true that the Green members came under huge pressure to vote for entering government but it has once again indicated that Green parties will always enter right wing coalitions when power beckons. It also displays the fact that even so called progressive movements like XR, which much of the Greens members are also supporters of, falter when faced with the choice between environmentalist capitalism and socialism as a means of saving the planet.

The outcome of the Programme for Government (which will now last five years with the leaders of Fianna Fail and Fine Gael rotating the premiership) will lead to, as Mc Hugh and her fellow dissenters in the Green Party warned: “annual deficit cuts and balanced budgets at a time of huge uncertainty where deficit spending may well be necessary, and cuts are almost certainly going to hit upon the most vulnerable the hardest”. Having been fobbed off with some environmental trimmings the Greens will once again, as in the coalition of 2007-11, provide cover for a government which will cause more misery for the poorest and most vulnerable in Irish society at a time when mass unemployment and economic collapse beckons. As Rosa Luxemburg warned on the eve of another global crisis “the choice is between Socialism and barbarism”. This Irish experience demonstrates again that Green parties in Europe will always be opposed to socialism and will always act as the environmental shield for capitalism.

(Since this article was written, Saoirse Mc Hugh has resigned from the Irish Green Party)

30 July 2020
To submit an article for the 'Discussion & Debate' section of our website please email it to info@leftunity.org