The People’s Assembly: the fight-back begins? 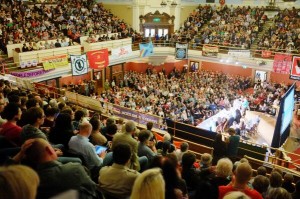 The gathering of over 4,000 people at the People’s Assembly Against Austerity in London on Saturday 22nd June was truly inspirational, reports John Keeley. To be together with so many who regard profit as a dirty word & who want a world based upon more humane values, such as equality, solidarity & dignity, it’s hard not to believe that there will be a fight-back. But as useful as it is to raise spirits, an objective analysis of what the People’s Assembly offers is needed.

Will the People’s Assembly stop austerity? To do this it would need to bring down the Con-Dem coalition & reclaim the Labour Party as a party fighting for the class interest of the workers. The first part is relatively easy compared to the second. Indeed, the fact that Labour haven’t stood up for the workers is the main reason why the coalition has had a relatively easy time of it to date. Although there are still many good people in Labour, the leadership & the vast majority of MP’s care first & foremost about their careers. They want power & from their rationale this means not upsetting corporate interests. Hence on the same day as the People’s Assembly, Miliband gives a speech saying he won’t reverse the cuts. How much more evidence do you need of the pro-business nature of the Labour Party?

Labour is lost in history. Just as capitalism faces potential collapse & the case for socialism needs to be made more than ever, Labour are found missing. Labour only offer a vision of revitalised capitalism providing tax revenue for public-private initiatives financing public-private provided services. The promise of better healthcare & education funded by a buoyant capitalism that somehow produces ‘social entrepreneurs’ who have a social conscious, once of course they have made their millions. It’s the ideology of liberals who want to be remembered as ‘good individuals’. Blair, Brown, Miliband, they are all the same.

So can Labour be reclaimed? An optimistic scenario would have the People’s Assembly amassing support from a large section of the population & scoring victories over the coalition so that it falls & the new Labour government, in their gratitude to the unions, giving them a bit of say & launching a Keynesian fiscal stimulus – more investment, more jobs, more union members. A new boom then boosts the coffers in the Treasury enabling a confident, more self-assured Labour to renationalise the railways & the public utilities, as well as investing in the NHS & a fully state-controlled comprehensive education system. A return to the hope of 1945 & the parliamentary road to socialism.

Rather than optimistic, this is delusional. Only those who have no understanding of the nature of capitalism today can entertain such a possibility. Unfortunately, that’s the vast majority in the unions & the Labour Party. The problem is the confusion between the vast wealth created by capitalism & the fact that capitalism only produces for a profit. On top of that is the nature of debt & how it artificially supports profit rates. These are not easy subjects. This is why it is essential for those of us who have studied capitalism & the nature of its crises to engage with the leaders of the People’s Assembly to show them that social democracy – capitalism with a strong welfare state – is not a realistic possibility.

There is no Keynesian solution. Capitalism cannot be reformed. For there to be true democracy where the people are both legislature & executive, requires not just the common, social ownership of the means of production, but a whole new approach to politics. It requires embracing participatory forms of organising – something that is happening increasingly. Political parties & parliament are not democracy. New institutions, such as local Peoples’ Assemblies, are required to enable equality in decision-making. An alternative to austerity necessitates an alternative system. A new mode of production & a new form of politics. Can the People’s Assembly rise to this historical challenge?

17 responses to “The People’s Assembly: the fight-back begins?”