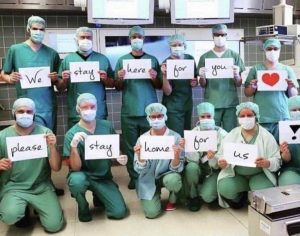 Felicity Dowling writes: Supporting the survival of as many people as possible (and survival to return to good health), has to be the unequivocal aim of our work in the next few weeks and months as Covid-19 moves through the population.

We have to campaign for life’s necessities for every human. This is a hugely wealthy country with the skills and efforts of a large, well-educated, hard-working population, at the hub of many international networks.

Survival involves medical care and the avoidance of contact with the virus. It also involves having the basic necessities of life like income, food, a secure roof over one’s head without threat of eviction, social and physical support where needed, and freedom from the fear of unexpected and unmanageable debt.

Planning for the provision of basic necessities should have been in a ready-to-go package of measures at local and national level. Was it beyond imagination to predict that some youngsters would misbehave? That the Just in time food distribution system might creak and shortages be expected? With 12 to 24 hour lead times and stock management systems, were there not always likely to be problems?

Instead of 21st century well-rehearsed and trialled emergency procedures, we have plans made up on the back of an envelope and then contradicted. Some of this confusion appears to be part of the unacceptable but still being implemented “herd immunity strategy”

We need medical treatment, avoidance of infection, food, shelter and social support but we also need clear and accurate reporting of what is happening in the country and internationally. The government is still successfully developing spin stories to cover their own fatal culpability. The BBC especially is using the spin that the fault lies with the ignorant population. The fault lies squarely with the government for years of neglect and for gross negligence in the run up to the pandemic.

Where the official press have failed to offer a clear and comprehensive explanation of the virus, the economy, of the struggle of working class families to find money for food and bills, citizen journalism has been effective, with probably the outstanding example being Tomas Pueyo. The editor of the Lancet described the crucifying crude, slow and destructive government response here.

Behind the brutal health emergency there are other crises reaching different peaks. The economy itself is in serious difficulties with global recession and even depression on the horizon, not helped by the virus, but not caused by it either. The climate crisis continues. There is a crisis in accurate reporting of the economy, of the virus, of internal government contradictions, of international conflict.

The health emergency is the driving force in the crisis

The Staff of the NHS kept the health service afloat through the worst of the Conservative cuts and “reorganisations”, working millions of hours of unpaid overtime. In this crisis too, NHS workers prove their huge worth, their compassion and courage. Retired doctors, nurses and paramedics have agreed to return to the NHS, and an emergency hospital is being set up in the Excel centre in London, this at a time when London is four days away from being at full capacity without urgent action.

The Health Service Journal told of frantic action to stop London running out of beds in four days. In one meeting it is reported that:

“According to several people on the call”, she said, “London runs out of [ICU] beds in four days” if urgent action is not taken. She also warned the need for intensive care beds will now double every three days.”

The Health Service Journal is also describing near mutiny over lack of personal protective equipment and testing resources.

It is assumed London is about one week ahead of the rest of the country in terms of the virus spread. Hover, without “testing, testing, testing”, isolation and mapping, it is not possible to know exactly what is happening, how many are infected, or where the ‘hotspots’ are, or take the most effective action – properly isolating those infected. In this, the UK fails dismally to match achievements in Asia. It is negligent of the government not to have responded properly to a pandemic. Pandemics are expected and should be well prepared for. Sadly, the UK (and US) governments have been found wanting, despite this exercise in 2016. Emergency planning is not new. Each council has a plan and there is even a college of emergency planning.

The figures are looking very grim indeed. Social distancing can reduce the deaths but effective government action could have been hugely more effective in reducing mortality, in significantly reducing the overall risk. The Financial Times claims that UK strategy is likely to cause 35,000 to 70,000 excess deaths.

During this crisis, we will be campaigning for huge resources for the NHS and huge resources for social care. We want good jobs not volunteering. NHS and social care will need staff, as many as they can get, and they will need resources and equipment, most of which should have been stockpiled many months ago. Claims of additional staff through fast track qualifying final year medical and nursing students should be viewed with some scepticism, as these staff would anyhow have joined the NHS within a few months.

The evidence is clear about what works. It is ‘testing, testing, testing’, tracking contacts, mapping the spread, using lockdowns and isolation for affected people. The World Health Organisation statement on 16th March was plain.

However we do not just need medical attention.

All humans will need food, heating, fuel – the basic essentials and such day to day assistance as they need to thrive, be they at work, laid off, or off sick. Government has made some tiny steps to provide a minimum structure of support but such is the state of the UK’s welfare system that many people still face real hardship.

Social solidarity, formal and informal, has sprung up in many areas to ensure no one is left unassisted. The government could employ tens of thousands of people for organised food distribution, for additional social care work and social support. Instead, they intend to rely on volunteers. This is a cheap and nasty short term solution to a long term problem.

Left Unity members and supporters, like thousands of other socialists, have been involved in such formal and informal support networks. There is more info on such groups here.

The media, Dominic Cummings and Boris Johnson are blaming the action (or inaction) of individuals for the coming wave of deaths yet the blame lies squarely with this government’s decisions. These decisions to privilege the economy over ordinary people’s lives, a decade of austerity, cuts to the NHS and the reorganisation of the NHS intended to make money for big corporations.

Way before Italy started treating patients in corridors the NHS was having to do this, without Coronavirus. Why?

The UK could easily afford a decent health care system. The NHS has long been recognised as the most cost effective health care system internationally, but for more than a decade the government CHOSE to run it down, CHOSE to let big corporations milk money from it. This was a clear political CHOICE. They have blood on their hands.

Even two weeks before the full impact of the disease became clear the local CCGs were discussing merging CCGs rather than commissioning ventilators or recruiting staff.

“Why have we had this appalling insufficiency of PPE and testing kits in the NHS and in the community?

The problem is due to NHS England’s Long Term Plan which is central to the government‘s commercialisation of the NHS. It’s only because NHSE’s LTP is not yet fully implemented, that we can have any kind of national response at all.

By splitting England’s NHS into 42 ‘integrated care systems‘ with tight restrictions which prevent the sharing of staff, resources and equipment that can occur with a national ‘risk pool’, the long term plan has made the creation of sufficient reserve supplies for emergencies impossible. Everywhere in the country is in financial deficit. NHS Supply Chain’s ‘demand management controls’ have been preventing fair distribution of what little equipment is available.

A proper public health response to COVID-19 would include full community testing and contact tracing (as recommended by WHO) but this has been made impossible because of local government and public health cuts by successive Conservative governments.

1 Return to a national risk pool, stop demand management controls, purchase and distribute PPE and testing kits to all NHS and community agencies

(Thanks to Wirral Defend our NHS)

The situation for social care is also grim. Disabled people are dependent on care workers for their day to day needs in a myriad different settings from their own homes to institutions. Unison is campaigning for testing for all care workers, for Covid-19 to be excluded from sickness management procedures, and for recruitment of more care workers.

Joe Halewood wrote “Contagion welcomes millions to the Tory benefit system”, explaining how the meanness and cruelty of years of inadequate benefits have come to plague still more people. The purpose of austerity welfare was to frighten people into taking any job on any conditions at any wage or to face actual starvation through the benefits system.

Lack of union organisation leaves people without power in discussing with employers. People even as I write are arguing with their bosses about safe ways of working or not working. This is arguing about their right to live. What should be happening is that reps from the workforce should be sitting down with management discussing what is and is not safe, discussing as equals and coming up with safe working practices. So much has been lost in terms of union organisation. The whole system of worker organisation will have to be rebuilt in many areas from scratch, otherwise the owners of Sports Direct and Wetherspoons will set the agenda for the post-crisis world.

Naomi Klein in Shock Doctrine famously describes how big business in the era of neo-liberalism takes full financial advantage of any crisis. Her comments on this crisis a can be seen here. It is the task of socialists to make sure it is working class communities that come out stronger from this extraordinary situation, not the big corporations.

The situation in Italy, France and Spain is truly dire. Left Unity operates as part of the European Left Party and is in touch with – and will continue to keep contact with – comrades in the worst affected areas.

Our love and solidarity go out to all the countries and their peoples now facing the pandemic.