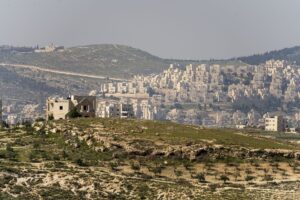 Left Unity opposes Israeli government plans to illegally annex Palestinian land in the West Bank. This was agreed as part of the “Middle East Plan” by Netanyahu and his crony Trump back in January. It effectively means that Israel will annex one third of the territory of the West Bank where the Palestinians have had their homes for centuries. Economically it has a huge impact on the Palestinian economy and the prospect of farming in the Jordan Valley for the Palestinian people. The Palestinian people are bound to resist and we stand on the edge of a new intifada. This is the logical conclusion of the Nakba which started in 1948, with the Zionist project ethnically cleansing and preventing over 750,000 Palestinians from returning to their homes, as well as creating an apartheid type state where Arabs and others are treated as second class citizens. New Israeli laws passed in 2018 further codify the exclusion of Palestinian citizens of Israel. The planned annexation finally puts the nail in the coffin of any two state solution and is likely to lead to war and unrest in the whole region.

Left Unity totally supports the struggle of the Palestinian people against the seizure of their lands and the annexation of the West Bank by Israel. Israel, supported by US imperialism and Trump, not being satisfied with depriving the Palestinian people of their rights and sending them to Gaza, the largest open air prison camp in the world, is now depriving them of any hope of having an independent Palestinian state. We utterly oppose these actions and call on the UK government and other European governments to take action to block its implementation.