Solidarity needed: drop the charges against anti-fascists in Greece! 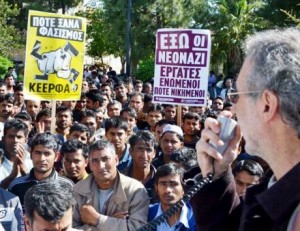 How you can help:

2) Send a letter of support to anti-fascists in Greece from your trade union, student union, social justice group or anti-racism organization (see below for sample letter). Email antiracismfascism@yahoo.gr.

3) Forward this appeal to all your contacts, especially allies in trade unions, student unions, social justice groups or anti-racism organizations.

4) Download a copy of the petition here, collect signatures from co-workers and friends, and deliver the petition to the nearest Greek Embassy or Consulate.

Petros Constantinou is an elected member of Athens City Council and the national coordinator of KEERFA (United Movement Against Racism and the Fascist Threat), an anti-fascist and anti-racist organization in Greece. In early July, Petros spoke out against the recent police killings of two Albanian escaped prisoners, describing their deaths as “the de facto application of the death penalty.”

In response, police have charged Petros under state “anti-terror” legislation for “terrorizing” the population and damaging Greece’s “international relations.” The only evidence for these charges was a distorted statement taken from the website of the openly fascist Golden Dawn party (Chrysi Avgi). The charges were announced the same day that fascists made death threats against Petros and defaced the local offices of a left-wing political party.

We, the undersigned, condemn the ongoing persecution of anti-fascist and anti-racist activists in Greece, and call on the Greek government to implement the following demands:

· Stop the criminalization of newcomers, migrants and refugees.

· Stop the persecution of anti-fascist and anti-racist activists.

· End all collaboration with the fascist Golden Dawn (Chrysi Avgi).

On behalf of , I would like to express our solidarity with your struggle against fascism and racism in Greece. We condemn the recent attempts by the Greek state and police to intimidate, harass and persecute anti-fascist and anti-racist activists. We call on the Greek government to drop all charges against Greek anti-fascist and anti-racist activists, including Petros Constantinou, Konstantinos Moutzouris and Savvas Michael. We will circulate your petition among our members and continue to support your struggle for justice.