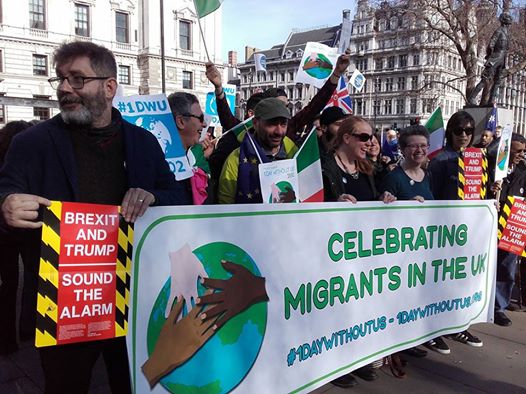 One Day Without Us photo Steve Eason

All serious economic research has shown that migrants make a substantial net contribution to the British economy. This is largely because a disproportionate number of them tend to be working-age adults. In a report issued in 2013, for example, University College London’s migration research unit estimated that the net annual value of the contributions of new arrivals to UK public finances was £25 billion. Specifically, migrants from the European Economic Area were estimated to have paid 34% more in taxes than they received in benefits in the ten years from 2001 to 2011.

A 2016 study by University College London academics showed that the arrival of EU migrants was correlated with an improving economy and labour market. Between 2010 and 2015, they discovered, 850,000 Europeans arrived to work in Britain, but at the same time a million more Britons entered the workforce. They concluded that: ‘mass European migration is actually fuelling the relative growth of the UK economy that in turn is making Britain ‘the jobs factory of Europe’ that brings them here. This, of course, is only what we should expect. It is an example of the ‘multiplier effect’, where activity in one part of the economy stimulates activity in others, in a continuous feedback mechanism.

The same University College London study in 2016 also found that 60% of new migrants from Western and Southern Europe had university degrees, and 25% from Eastern Europe. The authors concluded that Britain was attracting the highest number of university-educated migrants of any country in the EU year after year to work in the financial, technology, and media industries. Public services are also highly dependent on foreign staff, perhaps most notably the NHS, where 25% of doctors and 10% of nurses are from overseas.

Research by the highly respected National Institute of Economic and Social Research has concluded that immigration to Britain has little or not impact on overall levels of unemployment, even when the economy is in recession. There appears to be no link between migrant inflows and the overall level of those claiming jobseeker’s allowance. This is almost certainly a reflection of the fact that most migrants are filling jobs for which local labour is not available. In any case, the distinction between domestic migrants and overseas migrants – though central to right-wing discourse – is clearly arbitrary. Moreover nearly all studies of the effect of migration on jobs and wages neglect to include the effect of job creation through enterprise by migrants. Migrants create more jobs than their actual numbers.

Recent research on the impact of Brexit by the National Institute of Economic and Social Research suggests that the effect of restrictions on migration will be almost as damaging as restrictions on trade. The negative effects – cutting growth of GDP by between 3.4% and 5.4% over a decade – would far outweigh any modest effect on the wages of workers of low-skilled jobs. One of the report’s authors said: ‘Prior to the referendum, a number of analyses estimated the long-term impacts of Brexit on the UK economy; but none incorporated the impacts of Brexit-induced reductions in migration. Our estimates suggest that the negative impacts on per-capita GDP will be significant, potentially approaching those from reduced trade.’ As far as wages are concerned this research shows that ending free movement could possibly increase unskilled wages by 0.1% over a five year period but would probably NOT once these deleterious effects of ending free movement on the economy as a whole is taken into account.

The debate about immigration is rooted in nationalism, racism, and scapegoat politics. Restrictions involve borders, deportations, detention centres, and immigration police; they legitimise racism, give the green-light to thugs, and lead to aggravated levels of abuse and violence directed at minorities. They involve the denigration, persecution, and oppression of the victims of the system, both domestic minorities, and those fleeing war and poverty overseas. They are the mark of a barbaric, inhumane, dysfunctional social order.

The purpose and effect of the discourse around immigration is to confuse, divide, and disable effective working-class organisation and united popular resistance. Left unity stands foursquare with the most oppressed against the racists and the far right. And that means speaking out loud and clear, against racism, for migration, in defence of the existing right of free movement in the EU and seeking to extend that right to others.

7 responses to “Seven reasons why we defend Free Movement”