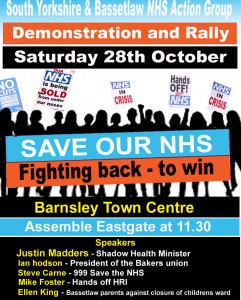 The newly formed, South Yorkshire and Bassetlaw NHS Action Group (SYBNAG) is appealing for support in their fight to stop the imposition of the ‘ACS’ (Accountable Care System). This will impose cuts of around £571 million over the next few years. They seek to ‘reconfigure’ services with little if any consultation or public scrutiny. There has been controversy about the establishment of a private company by Barnsley hospital to take over support services. This means pay and conditions can slashed further on top of an eight year pay cap. Other hospitals will be monitoring the success of this model in a bid to save money due to Tory cuts. Support the campaign and help get a big turnout in Barnsley.