Resources for solidarity with the Kurdish struggle 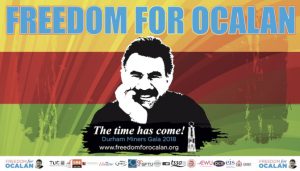 Solidarity with the opposition in Turkey, with the peoples of North Iraq, and with the people of the Autonomous Administration of North and East Syria: why it is important and urgent

Despite Erdogan’s brusque treatment of EU leaders and human rights organisations, what Europe thinks about Turkey and its foreign policy is important. People and institutions in Europe taking a stand in defence of human rights and democracy and in defence of the Kurdish people makes it easier for the Turkish/Kurdish opposition to operate. Linking hands with that opposition also is part of the struggle against the rotten deal (which Turkey has just announced it is dropping out of) between the EU and Turkey over refugees in exchange for muted criticism of AKP policies on many fronts.

People across the globe need to step up the pressure on the leaderships of the US, Russia, the EU, and here especially Britain, to reduce or better still drop their support for Turkish state. Twenty months ago Boris Johnson, then Foreign Secretary said: “Watching developments in Afrin closely. Turkey is right to want to keep its borders secure.” What has been the result of the powers’ inaction and the Russian clearing of Syrian airspace for Turkey? The brutal occupation of Afrin has involved the driving out of most of the many thousands of the original mainly Kurdish population, along with refugees from other parts of Syria, and the establishment in their old homes of mainly Islamist Syrian and some Palestinian settlers and a reign of terror and environmental destruction, especially of olive groves, carried out by official and unofficial Turkish forces and some of the settlers.

Now (6/8/19) urgent pressure is needed to push NATO countries especially US, Germany and Britain, those closest to Turkey, towards blocking Turkey’s current loudly-trumpeted and apparently imminent plans to invade and destroy more of the Kurdish, Yezidi, Turkmen and Syriac areas of North Syria and North Iraq. Again as in Afrin, the intention is to do this in company with various jihadi groups including ISIS. US Defense Secretary Esper has said today that any Turkish operation into northern Syria would be “unacceptable,” adding that the US would prevent any unilateral incursion. But these may well be hollow words, considering that the US did not lift a finger when Turkey attacked Afrin and occupied several other towns in North Syria that were not part of the autonomous zones, and that the US now has a very reduced number of troops in Syria, while Trump has made it clear that he wants US troops out. Moreover, although NATO policy is formulated behind closed doors, it is often clear that other members have little issue with what Turkey does in Kurdistan. There needs to be much more educational work on the purpose of NATO and agitation against its many devastating policies.

There is not one single central solidarity campaign, but a variety of campaigns and initiatives which people can usefully support. Key demands at the moment start with: No to the threatened invasion of the autonomous and self-governing parts of North and East Syria (‘The Autonomous Administration North and East Syria’), No to the intensifying occupation of parts of south Kurdistan (Iraq), including No to the siege of Makhmur, (a self-governing camp near Erbil in Kurdistan Iraq) of refugees from Turkey, and for an end to the Turkish army occupation of Afrin. Beyond this, other urgent issues are: defending democracy and showing solidarity with the thousands of political prisoners in Turkey, opposing the dictatorship, as called for by the HDP, defending academics for peace and journalists, calling for freedom for Kurdish leader Ocalan and the other political prisoners, and a complete end to the war on the Kurdish people, in Turkey, demanding peace, (including from the complicit western governments), and offering solidarity to people displaced or trying to rebuild their homes and communities whether in Turkey, Rojava or Iraq, or via the dangerous flight across the Mediterranean and into Europe.

Peace in Kurdistan (PIK), an umbrella or link for many campaigns including the international campaign to free Abdullah Öcalan, political prisoner, PKK leader, and addressee of negotiations for peace in Turkey. This campaign liaises with Kurdish community organisations running their own campaigns, and also works with MPs, organises and co-organises meetings, and delegations to the region, including Rojava, and promotes meetings on the issues, whether hosted by Kurdish organisations / solidarity networks, such as The Women’s Alliance for Kurdistan, Iraq and Syria; campaigns against the proscription of the PKK; builds links, such as with Campaign Against Arms Trade and Corporate Watch; PIK can tell you if there is a solidarity group in your area.

For those who want to give material aid, “Heyva Sor” / “Kurdish Red Moon”, is a charity run by Kurdish people in the diaspora and in Kurdistan – raising money and doing medical and relief work. Scroll down Donations section for English details at: http://www.heyvasor.com/en

Initiative to save Hasankeyf – urgent efforts still now being made to stop Turkish state from filling the dam: http://www.hasankeyfgirisimi.net/

To learn more about reconstruction projects in Rojava go to: https://www.facebook.com/KobaneReconstructionBoard/

The Internationalist Commune’s campaign ‘Make Rojava Green Again’ – ecological and tree-planting campaign in Rojava, have published a book available from http://dogsection.org/press/ and they currently have a crowd funder in partnership with Heyva Sor (see above) at  http://hskurd.org/en/ or https://www.facebook.com/hskurd to raise money for farmers in Rojava who have suffered terrible crop losses at the hands of Turkey-backed ISIS cells.

For general news and news on the resistance:

Firat News Agency has up to the minute reports from all parts of Kurdistan and the diaspora: http://anfenglish.com/

Posting a lot at the moment, so useful news and commentary resource;

F or news on Academics for Peace who are being persecuted in Turkey go to: https://barisicinakademisyenler.net/

The Solidarity with People of Turkey Network aims not only to support the struggle of the people of Turkey but also contribute to the working people’s struggle in the UK by forming a bridge between Turkish speaking communities living in the UK and the local work force in the country. Occasionally holds conferences and sends TU delegations to meet counterparts in Turkey https://www.facebook.com/spotturkey/

Friends of Kurdistan – Manchester, find on FB or Twitter by searching for: @FoKMCR

https://twitter.com/LDNKurdSol (London branch of above)

Informative Twitter accounts for news, commentary and/ or events details:

Rise up for Afrin

Rise up for Rojava

FB page of commune of internationalists in Rojava

https://www.facebook.com/KurdishStudentsUK/ Kurdistan Students Union holds events and promotes the liberation of the peoples of Kurdistan.

TV channels: produced under difficult conditions – war in the region, and frequent governmental repression incited by Turkish state elsewhere. Mainly in Kurdish but some programmes in other languages of the region and English. You can tell quite a lot about life in the region even without language knowledge, just by watching, especially from documentaries. Plenty of Kurdish music. 2 of the most accessible channels listed below, but you can search internet or Hotbird yourself.

Miley and Venturini, Your Freedom and Ours: https://www.hive.co.uk/Product/Thomas-Jeffrey-Miley/Your-Freedom-and-Mine—Abdullah-Ocalan-and-the-Kurdish-Q/21758329