Report from solidarity centres in Athens

Recently I visited Athens as part of a solidarity delegation from Left Unity. On Saturday 25 January, the day before Syriza’s election victory, two of us were fortunate enough to participate in a tour of some of the self-organising structures in Athens supported by the network Solidarity for All.

Our first stop was the ‘Solidarity Train’ in Agii Anagyri, so called for its location next to a railway. Founded by a group of local women in 2012, the Solidarity Train began by setting up stall by their local supermarket and asking customers to donate food, which they would then distribute locally. Agii Anagyri is an area with a diminished industrial base and a population that suffers with high rates of unemployment and private indebtedness. In spite of this, the food collection was initially successful, with large quantities being donated. However, as the crisis deepened following the second memorandum donations started become scarce. It was at this point that the group began to receive additional assistance from Solidarity for All. 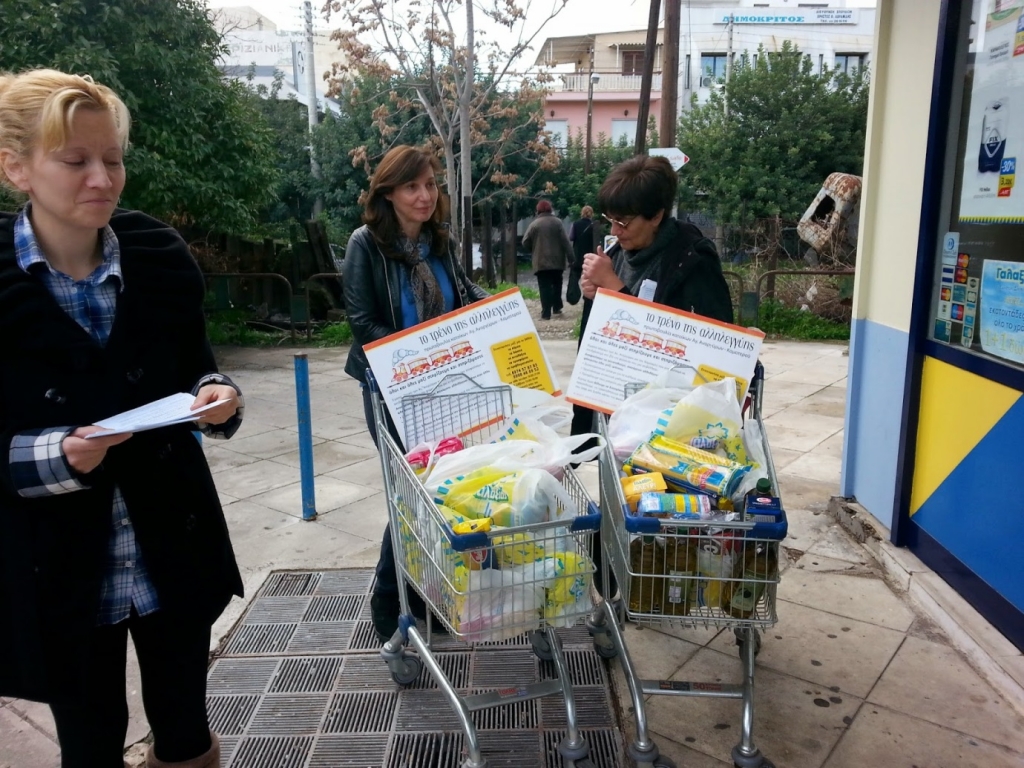 Solidarity for All, an umbrella network for a number of self-organising structures, began life in early autumn 2012 when Syriza created a solidarity fund out of the salaries of their newly elected MPs. However, Solidarity for All is not merely a solidarity fund, nor is it led or controlled by Syriza. It largely exists to support and coordinate the over 400 solidarity structures that have emerged in Greece during the crisis. The structures themselves grew out of the movement of the squares in the summer of 2011 and have retained their culture of decision-making by popular assembly. There are solidarity initiatives organising around health, education, food, cultural activities, legal support, as well as ‘without middlemen networks’ that create direct links between agricultural producers and urban consumers, and workers co-operatives such as the VIO.ME factory in Thessaloniki.

In the two years since its foundation, the Solidarity Train has not only managed to increase its provision of food to the community, it has also expanded into other areas. They now organise cultural activities such as lessons in dance and music, as well as English and French. They are keen to address the psychological and physical effects of the memorandum on the local population; as well as providing food they organise group therapy to counteract mental health problems such as depression, which have become increasingly widespread. 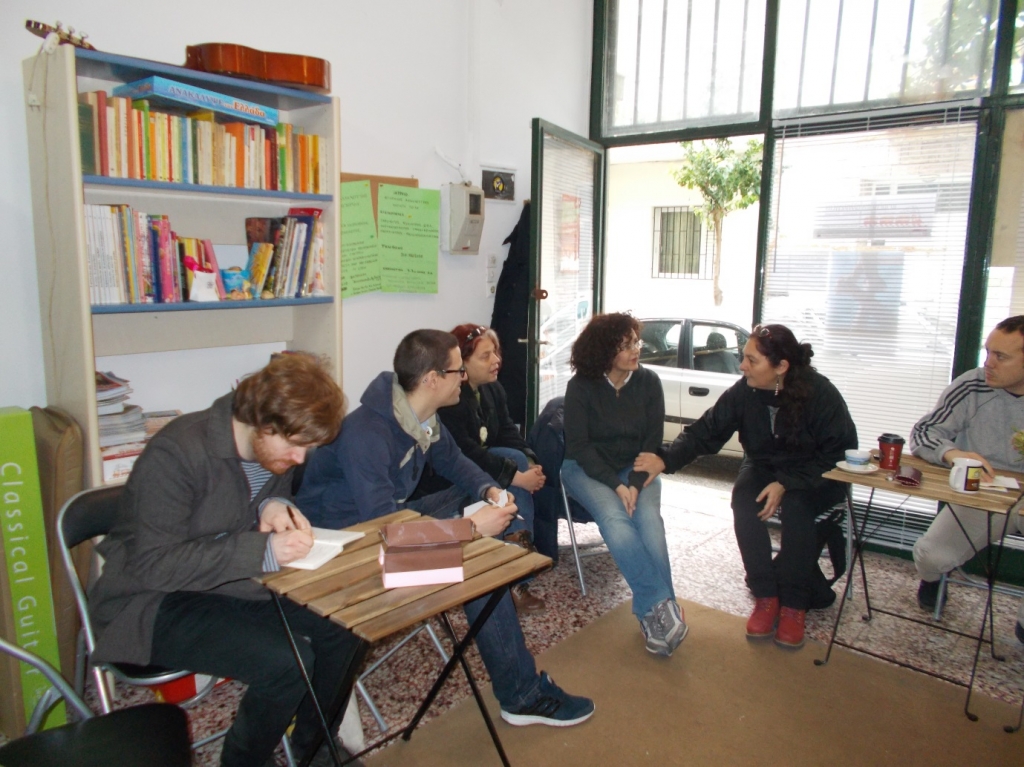 The Solidarity Train volunteers we spoke to were keen to emphasise the political character of their work. Their leaflet, translated for us by one of their members, describes them as ‘volunteers who have decided to do something about the crisis’, going on to name the memorandum as the ultimate cause of the crisis they seek to address. They encourage the users of the centre to think of themselves not as passive recipients of a service, but as active members of the centre with a stake in its activities and decision making. Most of those who collect food and participate in classes at the ‘Solidarity Train’ become actively involved in the running of it, and decisions are made by regular democratic assemblies involving both volunteers and service users. 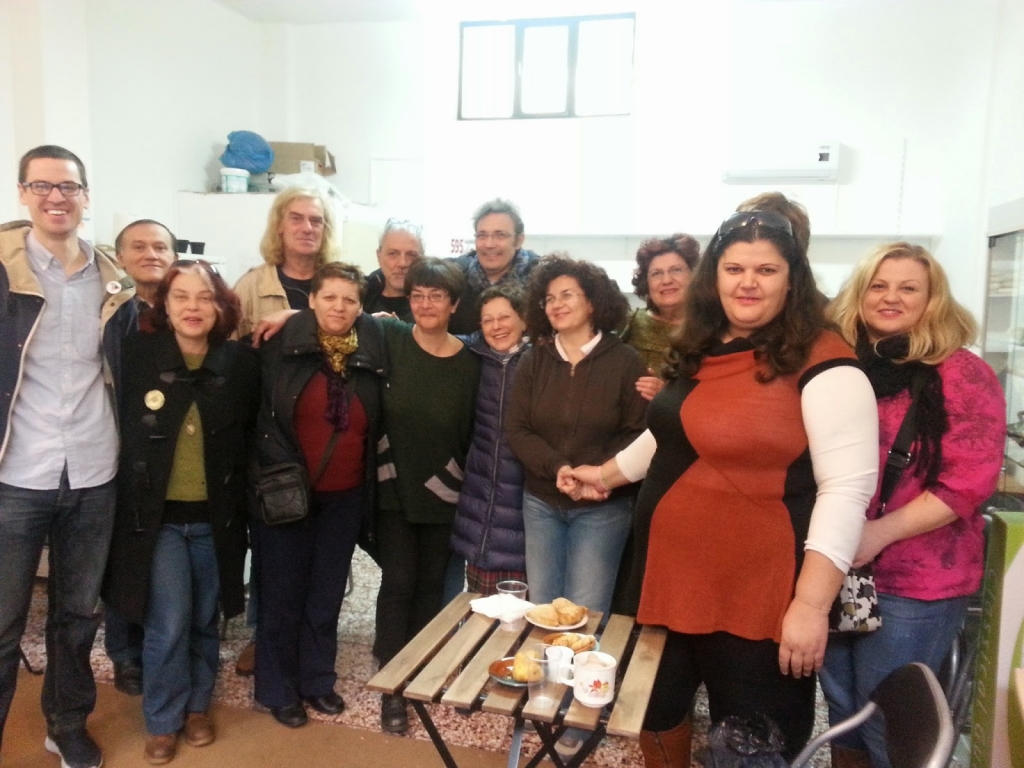 After warm goodbyes from the Solidarity Train, we headed to a social clinic in Nea Filadelfeia. The clinic itself was founded in September 2014 by a small group of volunteer doctors, but its roots lay in a local assembly structure that emerged during the 2011 movement of resistance to the second memorandum. Aris Kaikis, a 30 year old medical graduate who volunteers at the clinic, outlined the context in which the initiative began. Much of Greece’s primary care provision has been privatised and the state services that remain are chronically underfunded. Combined with the overall decline in living standards produced by austerity, this has created a shocking health crisis in Greece. Infectious diseases such as tuberculosis and malaria, which in the years before the crisis were long extinct, have made a return. An estimated 1.5 million Greek citizens, combined with all migrants without citizenship, are without health insurance. 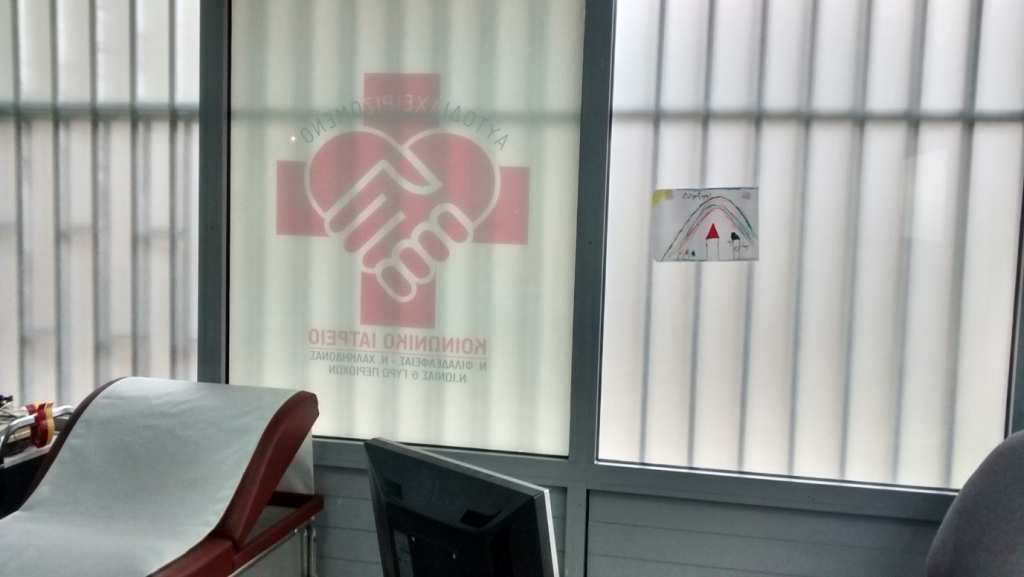 The social clinic treats 15 people a day, providing a variety of primary care services. It is entirely volunteer run; the building itself was constructed by volunteers and all the furniture is donated. Like the Solidarity Train, it is controlled democratically by regular assemblies in which both volunteers and service users participate. Dimitrios Matthaiou explained that meeting the immediate medical needs of the community is just one aspect of the clinic’s work; the other equally important component of their activity is consciousness-raising. Those who visit the clinic are encouraged to become active participants in the social movements.

Amongst the activists we spoke to there were different views on the imminent elections. All were left-wing and anti-memoranda, but political affiliation and support was varied. However, there was uniform agreement that whatever the result of the election the solidarity movement must continue, both in addressing the humanitarian crisis in Greece and in building a grassroots movement of opposition to austerity. Earlier this month Chrisoula Roussaki, an activist from the Solidarity Train, summed up the prevailing sentiment at the centre in an email to me: ‘We accept the risks, we are prepared for the worst scenarios but we will continue until the end.’