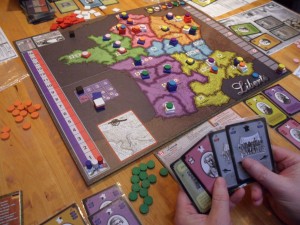 On 3rd March 2013, Class Wargames hosted a games playing session in the basement of the Firebox cafe in London, says academic and pro-Situ Richard Barbrook. Over the course of this spring afternoon, the political struggles of the 1789 French Revolution were played out on the board of Martin Wallace’s Liberté.

In this game’s opening phase, as happened in history, it was the liberals who prevailed over the guardians of monarchy and superstition. Then, as the conflict intensified during the next round, the republicans emerged from third place to seize control of Paris and – within a few moves – take over the whole country. Best of all, learning from the mistakes of the past, Napoléon Bonaparte had been sent to the guillotine in this ludic recreation of the 1789 French Revolution. Our Sunday afternoon of leftie gaming in a Trotskyist cafe was coming to a most appropriate conclusion. This time around, the Jacobin republic had won.

In other attempts to simulate these tumultuous events in late-18th century France, the different players take on the role of the rival factions or personalities. You are the leader of the Red republicans – and your task is to move your pieces around the board until you’ve beaten the Blue liberals and White monarchists. Martin Wallace’s game slyly subverts this familiar trope of historical re-enactment. Instead of having each person restricted to playing one of the rival factions, Liberté allows everyone to have a go at being a little Louis XVI, Lafayette or Robespierre. France is divided into different provinces and – during your move – you can choose to commit your forces to fighting for monarchical reaction in one region while simultaneously championing liberal moderation and republican radicalism in other areas of the board. The players of Liberté are leaders of occult conspiracies who are competing to manipulate the contending factions of the 1789 French Revolution. In Martin Wallace’s game, the liberals almost always come out on top during the opening rounds – and the republicans in its concluding phase. The trick is to be on the winning side at the correct moment. Whichever party dominates, your conspiracy must be in charge. 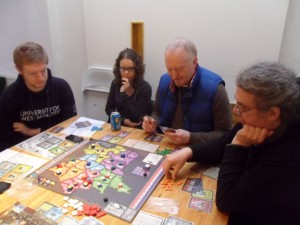 While playing the game and in the pub afterwards, the political meaning of Liberté was a constant topic of discussion. If nothing else, recognising and talking about the characters and factions featured on its cards was a history lesson in itself. More interesting were the ideological assumptions embedded within the game’s mechanics. By enabling each of the players to be monarchists, liberals and republicans at the same time, Wallace was echoing the paranoid fantasies of Hippolyte Taine and other 19th century Catholic historians who blamed the social upheavals of the 1789 French Revolution on malevolent conspiracies of freemasons, Jacobins and Jews. However, we reckoned that Liberté owed much more to those bizarre websites which denounce the elite members of the Illuminati who are plotting to subjugate humanity to the New World Order. Left and Right, big business and big government, they’re all controlled by shape-shifting lizards. Similarly, as players of Liberté, you act as the dark forces which give the orders to the politicians, generals and agitators who are directing the 1789 French Revolution. So, we wondered over a pint later on, does this mean that Wallace has invented an inherently conservative game? This time, the Jacobin republic might have won, but the players’ moves that had culminated in this heartening result were realising a reactionary logic. In this cynical reading of history, duty to the king, the rights of man and the one-and-indivisible republic had become nothing more than empty ideological slogans of rival conspiracies struggling for power. Yet, ironically, it was precisely this reactionary model of the 1789 French Revolution that had enabled its players to share the experience of leading the monarchist, liberal and republican causes. When the Jacobin republic won, everyone around the table in the Firebox cafe had contributed to its victory.

Back in 2007, one of our main motivations for founding Class Wargames was boredom with stereotypical ways of thinking about radical politics. In the back of Len Bracken’s biography of Guy Debord, we’d come across the almost forgotten rules of The Game of War. As well as providing thrilling contests with down-to-the-last-move finishes, his ludic masterpiece was also – most wonderfully – a smart lesson in Situationist theory. Over the years, our participatory performances of The Game of War have revealed the political effectiveness of this seductive combination of playing and reasoning. First-time contestants are always curious to find out whether or not Debord had succeeded in turning The Society of the Spectacle into a board game. Of course, what puzzles many people is why he didn’t invent a simulation of May ’68. Instead, the two sides in The Game of War are commanding pieces which represent the military trinity of Napoleonic warfare: infantry, cavalry and artillery. But, once they start playing the game, its Situationist logic soon becomes apparent. North and South are rival cybernetic systems. The winner is not the person who can take the most pieces, but the one who can fatally break their opponent’s network. By the time that the match is decided at our participatory performances, both sides will have understood that The Game of War is Debord’s theory in ludic form.

In these times of austerity economics and imperialist wars, the more po-faced members of the Left dismiss playing games as frivolous and infantile. However, as Debord well realised, the class enemy has no such inhibitions. Simulations are an essential tool for planning military expeditions, deciding business investments and plotting political power-grabs. Debord conceived of The Game of War as a detournement of these ludic manifestations of spectacular capitalism. He created a set of rules which would train revolutionary activists in Carl von Clausewitz’s military precepts for successful strategy and tactics. Just as importantly, he’d invented an entertaining game to be played in bars and cafes of the more proletarian and bohemian neighbourhoods. As this inveterate drinker would have appreciated, our participatory performances of The Game of War are much improved when accompanied by generous supplies of alcohol! Playing at politics is both serious and whimsical at the same time. Whether they realise it or not, members of the English Left sects closely resemble the devotees of different historical periods within wargaming such as Ancients, Napoleonics or World War Two. The Trotskyists are re-enacting Petrograd 1917, the Anarchists are reliving Barcelona 1936 and the Autonomists are replaying Paris 1968. Class Wargames believes that English lefties should come out of the closet and embrace their inner gamer. You no longer have to join some small sect to become a Trotskyist, Anarchist or Autonomist. Why not instead play games where you too can be a little Lenin, Durruti or Cohn-Bendit? If this experience is analysed correctly, your simulated experience of Trotskyism, Anarchism and Autonomism provides an excellent method of thinking about these political currents in more creative ways than oft-repeated slogans and dogmatic positions.

Over the years, Class Wargames has investigated the political possibilities of many different board games. Of course, we always enjoy another match of our original inspiration: Guy Debord’s The Game of War. As our March 2013 meeting at Firebox demonstrated, there are many other simulations which are also well worth playing. Even those who questioned its ideological assumptions thought that Martin Wallace’s Liberté was politically most interesting. For our next Sunday meeting at Firebox, we’ll be trying out Jim Dunnigan’s Chicago, Chicago! This classic S&T game from 1970 recreates iconic confrontation between New Left protestors and Mayor Daley’s police at the 1968 Democratic Party convention in the windy city. Crucially, in this simulation, these clashes in Chicago are decided by who dominates the TV news headlines rather than who prevails on the streets. Marshall McLuhan’s Understanding Media is turned into a board game. We’re definitely looking forward to trying out Chicago, Chicago! again.

Class Wargames invites you to join us at one of these Sunday afternoon sessions at Firebox. We’re also open to invites to host participatory performances in your own town or city. Above all, we would urge Leftists to enjoy playing political games together. What better metaphor can there be for socialists resolving their sectarian squabbles than moving pieces over a board? We can only successfully argue with each other by agreeing to observe the rules of the game without too much cheating. Competition requires cooperation. In honoured memory of Guy Debord, Class Wargames is proud to proclaim its world-historical mission: playing politics as the ludic guide to intelligent communist thinking. Proletarians of all nations, unite and fight on the game board! 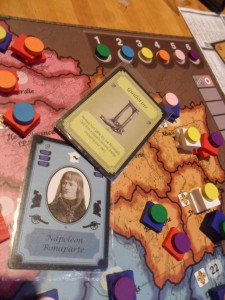 2 responses to “Playing with politics”