No to Forced Academisation 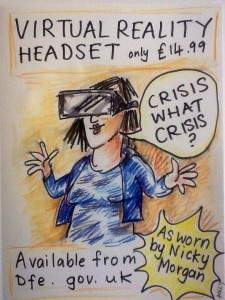 Teachers were cheered to hear the permanently bewildered Education Secretary Nicky Morgan heckled and ridiculed at the NASUWT teacher conference.

This government is woefully out of touch and educationally illiterate. The National Union of teachers has voted for a mass campaign against forced academy status.

The  Government white paper aims to end comprehensive education which could end recognition of existing pay and conditions of teachers. Head teachers would be able to decide who can become a teacher and pay them at a salary they think is appropriate, change their hours of working, class size and the curriculum. Teaching as a profession is under threat.

Already some schools are opting for CBT (Computer Based Training), where pupils learn by interacting with a computer and are supervised by a non-qualified teacher. This is a slippery slope that will see some children suffer an inadequate education and academy chains can pocket the savings.

Forced academies are no answer to the chronic teacher shortage, low morale and under-investment. This Government would rather spend millions on privatisation than invest it in a public comprehensive education service that serves the needs of all children.

The NUT will be balloting our members for a one day strike in the summer term to defend existing pay and conditions with other education unions where possible, but the union will take action alone if necessary.

Teachers are also voting for discontinuous action with other unions NAHT, NASUWT, ATL, GMB, UNISON and are determined to force the numerically weak and divided Government to back down.

Left Unity members need to organise in their unions and communities to support this campaign help organise meetings, protests alongside education unions.