No justice, No peace 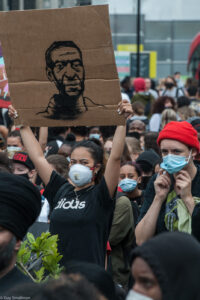 In the wake of the pandemic we are seeing a global uprising of the working class led by people of colour. This mass revolt has been sparked by the murder of George Floyd in Minneapolis. Floyd was asphyxiated by a white police officer who knelt on his neck depriving him of oxygen for over 9 minutes. The murder of black people by police officers in the States is routine but this murder has set off the biggest anti-racism protests seen in the United States since the 1960s civil rights era. Within days ‘Black Lives Matter’ protests have spread across the globe through Africa and Latin America and Europe.

In the UK a spontaneous movement of tens of thousands of young people has taken to the streets opposing racism, police brutality and calling for social justice and social change. As in the States the movement is black-led and is multi-racial and it is growing. What the pandemic and this murder has revealed is that millions of people are no longer prepared to accept the structurally racist and unequal system that confronts them.

In the US the first demand is that all four police officers who were involved in the arrest of George Floyd should be charged. Here the demand for justice for George Floyd is accompanied by the demand for Justice for Belly Mujinga, the railway ticket office worker who contracted Covid-19 and died after being spat at while on duty. The police decided not to pursue her attacker.

Left Unity stands in full solidarity with the protesters. The organisers and the protesters themselves have stressed the importance of safety on the protests with social distancing and the wearing of masks. Many of the protesters have also been wearing gloves. We applaud their responsibility which contrasts with the criminal irresponsibility of this government in dealing with the pandemic. The UK has the highest death toll by population from the virus in the world and the black and Asian community have been disproportionately affected by this.

Not only that but the BAME community have received more than 25% of all Covid-19 fines and the police have used their new powers to target black youth while ignoring serious breaches of the lockdown regulations by establishment figures like Dominic Cummings, Johnson’s chief adviser.

The movement against racism and against the rise of the far right is being fuelled by widespread social injustice and many issues are now fusing into the mass uprising which is developing across the USA and internationally.

We are entering the worst economic crisis that the world has seen and the elites will attempt to make the poor and the dispossessed pay for their crisis. We live in an age of environmental destruction and climate change. The pandemic itself resulted from the way society and production is currently organised.

But battle has now been engaged between those who want to maintain their class rule and those who seek a different better world in which we eradicate racism, poverty and all forms of oppression – and we free humanity as a whole from the chains of capitalism. A new movement is being born.

Time is short. The far right is organising too and trying to link up with the most reactionary elements in the state and it will need to be smashed. But this is not its time. The power lies with the millions of young people black and white who have decided to fight. Already both here and in the USA some trades unions are organising alongside the young people. Transport workers there are refusing to drive the buses that take those arrested to jail, and nurses leaving their shifts from hospitals are going straight to the demonstrations to help treat those injured by police brutality. The labour movement as a whole, here and internationally, must support this new movement and be part of it.

Left Unity pledges to play its part in building this new movement and working with others to help make the dreams of us all a reality.