Manifesto for the European women’s strike 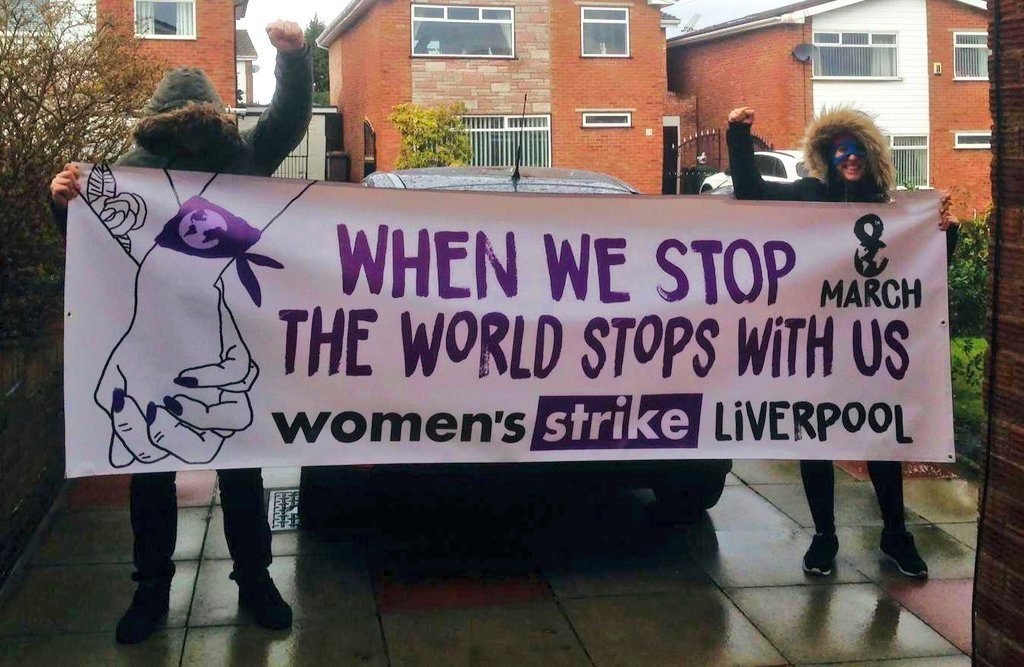 This coming 8 March we want to extend our alliances among women in order to defend the rights we have won, say the Bilbao European Forum. It was the union of many women throughout the world which won great victories for all of us and brought us the rights that we have today. Before our time there has been a long history of women activists, suffragettes and trade union members. However, we know that it’s still not enough: there is still a lot to do and we have to keep up the struggle.

We are seeing our achievements in Europe undermined through the policies of cutbacks and the advances made by the extreme right. In the face of these challenges sisterhood is our weapon; mass action will enable us to keep moving forward. 8 March is our day, an international day, and a day of action. This 8 March we, as women from all over Europe, are being called to take part in the FEMINIST STRIKE.As women our identities are multifarious: we are diverse. We live in countries with different socio-economic and socio-cultural realities. In both rural and urban environments; in the workplace and also in the carer environment. We are local, gypsy, migrated and “racialised”. We are all ages and we are lesbian, trans, bisexual, hetero…we are those who are absent: we are the murdered, we are the prisoners. And those who are not seen, refugees and victims of trafficking for sexual exploitation We are EVERYONE. Together on 8M we are stopping Europe and shouting out aloud: ENOUGH! in the face of all the violence that afflicts us. ENOUGH! Of aggression, humiliation, marginalisation or exclusion. We demand that all European countries apply the Istanbul Convention, in which violence against women is recognised as a violation of human rights and that all the countries have the resources and means to develop real and effective policies which will help to create a Europe free from violence against women and girls. We condemn the repression exercised by those governments and political groups at the forefront of repressing the struggle for social and reproductive rights.

ENOUGH! Of the daily and concealed male violence that women have to live with whatever our age or circumstances. WE WANT to be able to move freely in all places and at all times.

We highlight and condemn sexual violence as a paradigmatic expression of the patriarchal appropriation of our bodies, which is even more prevalent for women in situations of vulnerability such as migrant women and domestic workers. It is urgent that our assertion Not one less should be a reality.

ENOUGH! Of oppression because of our sexual orientations and identities! We condemn the social, institutional and employment-based LGTBI-phobia that many of us suffer, as another form of male sexist violence. We are women and we are diverse.

We are the ones who reproduce life. The domestic and carer work which women do is essential for sustaining life. That it is mostly free or devalued is a pitfall in the development of capitalism. Now, with the carer’s strike in the family and society, we are providing visibility for a job that nobody wants to recognise, whether at home, poorly paid or in the black economy. We assert that carer work has to be recognised as a key social asset, and we demand the reallocation of these types of tasks.

Today we are demanding a society that is free from oppression, exploitation and male violence against women. We call for rebellion and struggle against the alliance between patriarchy and capitalism which would like us to be docile, submissive and silent.

We do not accept that we should be subject to inferior working conditions or earn less than men for the same work. For that reason on the 8M we are also holding a worker’s strike.

A strike against “glass ceilings” and job insecurity, because the jobs which we are able to access are characterised by temporariness, uncertainty, low wages and unwanted part-time work. We swell the ranks of the unemployed. Many of the jobs we do have no guarantees or are not regulated. And when some of us are in better jobs, we find that the positions with higher salaries and greater responsibility are filled by men.

ENOUGH! of wage discrimination just because we are women, enough of contempt and of sexual harassment in the workplace.

We condemn the notion that being a woman is the main cause of poverty and that we are punished for our diversity. Precariousness is made worse for many of us because we are older, because we have been migrated or been “racialised”, or because we have different abilities or an image outside the norms. We demand that our employment situation should allow us to develop a vital project with dignity and autonomy; and that work must adapt to the necessities of life: pregnancy or carer work must not be the object of employment dismissal or marginalisation, nor should they diminish our personal or professional expectations.

We also demand the pensions that we have earned. No more miserable pensions, which force us to endure poverty in our old age.

Let us shout very loud against the savage neo-liberalism which is imposed as a single mindset worldwide and that is destroying our planet and our lives. As women we have a key role in the fight against climate change and in the preservation of biodiversity. That is why we are firmly committed to food sovereignty for peoples. We demand that the defence of life be placed at the very centre of European economics and politics.

We demand to be the protagonists of our own lives, of our health and of our bodies, without any kind of aesthetic pressure, nor of commodification in order to satisfy the sexual and reproductive desires of the patriarchy. Our bodies are not commodities or objects, and that is why we are also holding a consumer strike. Enough of being used either as merchandise or as attractions!

We also demand the depathologisation of our lives, our emotions, our circumstances: medicalisation responds to the interests of big business, not to the needs of our health. Stop treating our life processes as diseases!

Education is the main stage at which we construct our sexual and gender identities and therefore we demand our right for all to a public, secular and feminist education. An education that does not relegate our history to the margins of textbooks; and in which the gender perspective is cross-cutting. We are not an exception, we are a constant that has been kept quiet!

No woman is illegal. We say ENOUGH! to racism and exclusion. We cry out loud and clear: No to wars and to the manufacture of armaments! Wars are the product and extension of the patriarchy and of capitalism for the control of territories and people. The direct consequence of wars are thousands of women refugees all over the world, women who are being victimised, forgotten and assaulted. We demand that all migrants be welcomed, regardless of the reason why they are migrants. We are free women in free countries!

We condemn budget cuts in the sectors which affect women most: the health system, the social services and education.

We condemn corruption as an aggravating factor in the crisis.

We condemn the patriarchal justice system which does not consider us as having full rights under the law.

We condemn the serious repression and curtailment of rights that we are suffering.

We demand full equality of rights and living conditions, and full acceptance of our diversity.

WE WANT TO BE FREE, WE WANT TO LIVE, TO BE FEMINISTS, FIGHTERS AND REBELS! And after 8 March: WE WILL KEEP GOING UNTIL WE GET THE EUROPE AND THE WORLD THAT WE WANT!