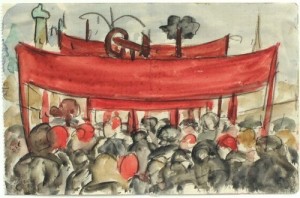 Twenty seven comrades came to the third Left Unity meeting, for the majority this was their first meeting. The meeting was introduced by Gioia Coppola, an communist from Italy who gave a report on the recent Italian elections. She was despondent about the prospects for the left and saw little positive in the vote for Beppe Grillo’s Five Star Movement. Toby Abse is writing an article on the Italian elections for Left Unity which will appear shortly. Nick Wrack from the Independent Socialist Network spoke to the main theme of the meeting, Why is there no party to the left of Labour? What sort of organisation do we need? Below we reproduce his notes which were circulated during the meeting. They are, as Nick says, not fully formulated or exhaustive but are reproduced here them as a contribution to the ongoing debate about these issues.The discussion on this question did not ignore the very real problems and actual experiences that comrades had gone through in previous Left Unity projects and although one of two questioned the validity of continuing the debate the majority opinion was to push forward and agree a joint statement that would be a basis for future work.

Kate Hudson presented the enlarged Left Unity statement around which there was a great deal of consensus. A three person working group was established to incorporate the changes that comrades suggested. The draft, still to be worked on this group, is included at the end of this report.

Fred Leplat reported on preparations for the People’s Assembly. More than 300 people have already registered for the Assembly which is now supported by all the trades unions together with dozens of campaigning groups from around the country. Recent signatories to the Assembly 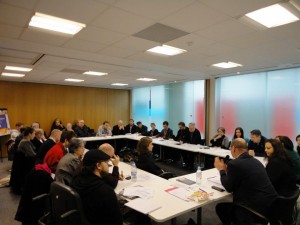 planning meeting for the People’s Assembly

statement include Unite Community Portsmouth, Queers Against the Cuts, Bring Back EMA Campaign, Yorkshire CND, Enfield Alliance Against the Cuts, Poets in Defence of the Welfare State, Sussex Student Occupation and many more. The first organising meeting for the Assembly took place the day after our meeting – it was attended by more than 45 people from all sections of the movement. The Assembly is generating enormous enthusiasm and Owen Jones and Mark Steel are launching a nationwide speaking tour to build support for the Assembly.

Is a new left party possible and what should it be like? Nick Wrack

Why is there no party to the left of Labour?

1. Clearly, there is a need for such a party.
Austerity. Cuts. Destruction of the welfare state. Education. Health. Housing. Pensions. All gone.
2. Objective reasons – strength of Labourism, defeat of the w/c over last 30 years, retreat of the ideas of socialism – i.e. ‘there is no alternative’ (Thatcher).
3. Having said that, there could and should have been a party, even if it may have been difficult to build and sustain at this stage
4. Subjective reasons – sectarianism, rivalry, hostility and egotism of various left groups and individuals.
5. Opportunism – a belief that there’s a short cut to building the sort of party we need. Patience, hard work, consistency.

What sort of organisation do we need?

6. A political party to represent the interests of the working class. One that engages in political activity. Participates in all aspects of working class life and struggle. Including elections.
7. It cannot be built solely on elections – must be day-to-day work, all struggles – workplace, community, in education, in retirement etc.
8. But a working-class party cannot abstain from electoral activity, as though it doesn’t matter.
9. One that defends what we have – line in the sand
10. One that attempts to extend what we have – militant action. Is there room for reforms – only when massive class action forces them from ruling class.
11. One that fights for a new society. Classless society, no class rule. Means the working class fighting for power, for socialism – common ownership of the means of production, production for need not profit – laying the basis for humanity to flourish, for history to really begin.
12. The individual development of each is dependent on the development of all.
13. This present system tramples not only on us each economically, but on our souls, on our very being, degrading us and squeezing humanity out of each of us.
14. The organisation has to be based on these principles – fighting here and now, but pointing out that if we want to put constant struggle into the rubbish bin, to the history books, we must link each fight to the ultimate goal of a new socialist society. Only then can we wake up in the morning without having to worry about food, warmth, shelter and our future. Only then can we begin to really develop as human beings – enjoying the world and our neighbours and developing fully our own potential.
15. So, the party has to be socialist.
16. That also means that it must be internationalist. W/c has common interest across the globe. Here in UK it means that it must have a European-wide perspective. Not a defender of the EU (capitalist programme built into treaties and laws) but a proponent of genuine European integration, utilising Europe’s vast resources for the benefit of all.
17. No national solution to the crisis. Pan-European w/c actions, including electoral engagement. To transform whole of Europe.
18. It has to be democratic – self-evident. It has, as much as possible, to prefigure the new society.
19. It has to be mass – an army of persuaders.
20. Socialism will only come about democratically – i.e. by the will and action of the mass of the w/c – i.e. the majority in society.
21. Not a bureaucracy, or an elite, a parliamentary majority acting on its own from above.
22. The emancipation of the w/c is only through its own act. Acting together to achieve political and economic power. Will liberate humanity. 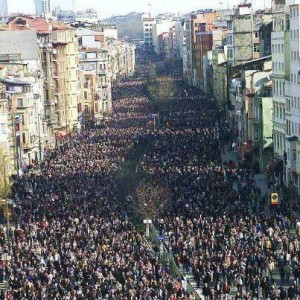 Europe is plunging deeper and deeper into crisis. Its governments are continuing with their failed austerity policies which are destroying the social and economic gains working people have made over many decades. The economic crisis has increasingly become a social and political crisis as people face poverty, hunger and even death, as a result of the catastrophic and government-imposed failure of health systems and social services. A further manifestation of this crisis is the rapid development of fascism in Greece, in the shape of Golden Dawn.

However the people of Europe are fighting back. There is a continual mobilisation on the streets to oppose these policies, together with strikes and diverse forms of direct action and resistance. European-wide cooperation is increasing as the movement opts for greater political coordination in solidarity and action. In Greece, France, Germany and elsewhere, new political formations have emerged, drawing together a range of left forces, posing political, social and economic alternatives, and challenging the capitulation of social democracy to neo-liberalism. Here in Britain, a successful response to the rightwards move of Labour has not yet taken place, yet we have equal need of a new political formation which rejects austerity and war, advocates a greater democratisation of our society and institutions, and poses a new way of organising everyday life.

Such a new left formation would present an alternative set of values of equality and justice; socialist, feminist and green, informed by Marxism but not defined by it. Its politics and policies would stand against capitalism, imperialism, war, racism and fascism. Its urgent tasks would be to oppose austerity, defend the welfare state, fight to restore workers’ rights and advance alternative social and economic policies, redistributing wealth to the working class.

Its political practice would be democratic, diverse and inclusive, committed to open dialogue and new ways of working; the mutual respect and tolerance of differences of analysis; the rejection of brutality and distortion of traditional left structures and their frequent reproduction of the gender domination of capitalist society.

International solidarity is fundamental to the success of any resistance and the achievement of any political progress; such a new political formation will work with other left organisations and movements in Europe and internationally, to build coordination, strategic links and common actions.

The need for cooperation amongst those forces in Britain which seek to bring change to our society is vital. The need for unity is paramount as attacks on the living and working conditions of ordinary people intensify, and the very fabric of our welfare state is being destroyed. A dialogue of the left is being opened, to ensure that this political perspective receives adequate expression and that we do not remain outside of the political developments in Europe and beyond. The situation is now so urgent that sectarian attitudes and interests must be abandoned.

A new political movement of the left is necessary. We call on all those willing to tread this path to support this Appeal, so that this essential discussion can make progress.