Left Party Platform submission for the aims section at the founding conference. 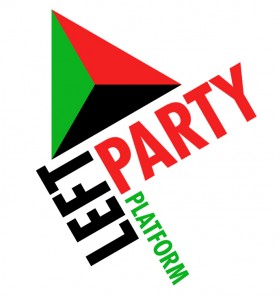 In the light of positive feedback about our original platform documents some supporters have suggested that the platform ‘aims’ statement could be strengthened, before being put to conference, by including some elements from the background document, as well as on trade union work. This has been done and circulated to and approved by Left Party Platform members. This version below is the one that has been sent in for the Left Unity conference on November 30th. Should you wish  to support this statement of aims please email us at leftpartyplatform@gmail.com and we will add your name. There will be an open meeting to discuss the platform statement and put the case for a broad left party this coming Thursday.

1. The ………. party stands for equality and justice. It is socialist, feminist, environmentalist and against all forms of discrimination. We stand against capitalism, imperialism, war, racism, Islamophobia and fascism. Our goal is to transform society: to achieve the full democratisation of state and political institutions, society and the economy, by and for the people.

2. Our immediate tasks are to oppose austerity policies designed to destroy the social and economic gains working people have made over many decades; to oppose the scapegoating which accompanies them; to defend the welfare state and those worst affected by the onslaught; to fight to take back into public ownership those industries and utilities privatised over the last three decades; to fight to restore workers’ rights; and to advance alternative social and economic policies, redistributing wealth to the working class.

3. We are socialist because our vision of society is one where the meeting of human needs is paramount, not one which is driven by the quest for private profit and the enrichment of a few. The natural wealth, productive resources and social means of existence will be owned in common and democratically run by and for the people as a whole, rather than being owned and controlled by a small minority to enrich themselves. The reversal of the gains made in this direction after 1945 has been catastrophic and underlines the urgency of halting and reversing the neo-liberal onslaught.

4. We are feminist because our vision of society is one without the gender oppression and exploitation which blights the lives of women and girls and makes full human emancipation impossible. We specify our feminism because historical experience shows that the full liberation of women does not automatically follow the nationalisation of productive forces or the reordering of the economy. We fight to advance this goal in the current political context, against the increasing divergence between men’s and women’s incomes, against the increasing poverty among women, against the ‘double burden’ of waged work and unshared domestic labour, and against the increasing violence against women in society and in personal relationships, which is exacerbated by the economic crisis.

5. We are environmentalist because our vision of society is one which recognises that if humankind is to survive, it has to establish a sustainable relationship with the rest of the natural world – of which it is part and on which it depends. We recognise that an economy based on achieving maximum profits at the lowest cost in the shortest possible time is destroying our planet. The current operation of industry and economy is totally incompatible with the maintenance of the ecosystem through the growing loss of bio and agro diversity, the depletion of resources and increasing climate change. The future of the planet can only be secured through a sustainable, low carbon industrial base designed to meet people’s needs on a global basis.

6. We are opposed to all forms of discrimination, whether on the basis of class, gender, race, impairment, sexual orientation, gender identity, nationality, religion, age or politics. The current economic onslaught disproportionately affects already disadvantaged groups and we oppose their persecution and oppression. We support the free development, opportunity and expression of all, without impinging on the rights of others, and the introduction of legislation and social provision to make this intention a reality. No society is just and equal while some people remain without the support needed to achieve their full potential.

7. We work for and support strong, effective, democratic trade unions to fight for better wages and salaries, for improved living standards, for better working conditions and stronger, more favourable, contracts of employment. We believe that the strength of the union is the people in the workplace; that what each person does at work matters – to make the job better, to make the service provided more effective, to persuade workers to combine for greater strength.

8. Our political practice is democratic, diverse and inclusive, organising amongst working class communities with no interests apart from theirs, committed to open dialogue and new ways of working; to the mutual respect and tolerance of differences of analysis; to the rejection of the corruption of conventional political structures and their reproduction of the gender domination of capitalist society. We recognise that economic transformation does not automatically bring an end to discrimination and injustice and that these sites of struggle must be developed and won, openly and together.

9. We will campaign, mobilise and support struggles on a day to day basis, recognising the need for self-organisation in working class communities. We recognise that support for our party and its electoral success will only advance to the extent that it is genuinely representative of working class communities, has no interests separate from theirs, and is an organic part of the campaigns and movements which they generate and support.  We will engage in the national and local electoral processes, offering voters a left alternative – where any elected representatives will take an average wage – while understanding that elections are not the only arena or even the most important arena in which political struggles are fought.

10. We are an internationalist party. There are no national solutions to the problems that humanity faces. Capitalism is an international system, highly organised and globalised and its defeat requires not only international solidarity but the linking up and coordination of struggles across Europe and the world. We will work with left organisations and movements in Europe and internationally such as the new European left parties currently organised in the European Left Party, including Syriza, Bloco de Esquerda, Izquierda Unida, Die Linke, Front de Gauche and others, to build coordination, strategic links and common actions to advance that struggle. We will also seek to learn from the experience of those parties in Latin America which have challenged and rejected neo-liberal economic policies and are establishing a social and economic alternative in the interests of the majority of their peoples. We stand against war and military intervention, against the exploitation of other countries for economic gain, and for a drastic reduction of military expenditure for the benefit of social spending, and for a foreign policy based on peace and equality.

12 October 2013
To submit an article for the 'Discussion & Debate' section of our website please email it to info@leftunity.org

34 responses to “Left Party Platform submission for the aims section at the founding conference.”