Stuart King reports from the occupation of the Carnegie Library in Lambeth which faced imminent closure by the local council. 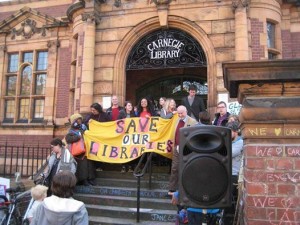 Lambeth council had planned to lock the doors of Carnegie Library to the public at 6.00.pm on Thursday night. Instead library users refused to leave and vowed to keep the library in the hands of the community.

A spokesperson for the stay-in protestors said “This is not Lambeth Council’s library to close after 110 years, it belongs to the locality. We are staying here to publicise just what Lambeth’s Labour council is doing to our local libraries – ripping the heart out of them to turn them into unwanted gyms.”

Protestors have already festooned the Carnegie library with posters and banners showing the community will resist shutting our library. The aim is to turn the user controlled Carnegie library into a beacon of resistance to library cuts and closures across Lambeth and the country. 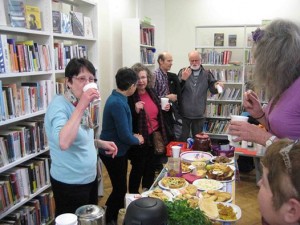 With the front doors d-locked and the side door under control of library users the Carnegie Library stay-in got off to a flying start with about 150 plus people staying put, refusing to recognise Lambeth councils closure of the library.

Press releases went out and London media started arriving in droves with the Evening Standard arriving at midnight. A mixture of song and speeches kept people happy inside, food arrived from sympathetic local businesses and users. Outside the candle lit vigil and “Beep if you support” crowd got universal acclaim for passing cars and public. Police turned up and were turned away in a civilised manner after being informed this was a civil matter. 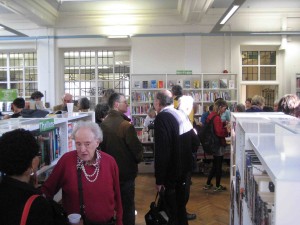 Occupiers are determined to stay in making the point that Lambeth Labour council, led by the right-wing Progress group, are not going to be allowed to give away our libraries as gyms. Come down and join us – Carnegie Library 188 Herne Hill Road, SE24.

One response to “Lambeth library occupied to prevent closure”