Labour loses election in its heartland to UKIP

The Labour Party sensationally lost a council by-election to the UK Independence Party in one of its heartlands of Rotherham this week.  Harry Blackwell examines the background and its consequences. 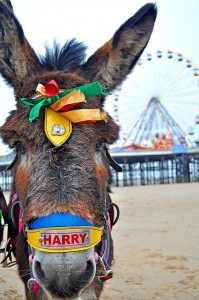 Labour lost 24% of their vote in the previously ‘safe’ Rawmarsh ward of Rotherham Borough Council in South Yorkshire.  Labour came 104 votes behind the victorious UKIP candidate, with a swing of +35% from Labour to UKIP (full result below).  The ward is in the parliamentary constituency of Wentworth and Dearne, held by Labour’s Shadow Health Secretary John Healey.

There were important local reasons behind such a dramatic swing in one of Labour’s ‘rotten boroughs’, where tradition has it that even a donkey with a red rosette gets elected (an all too familiar occurrence).

The by-election was caused by the resignation of Labour’s Shaun Wright following his election to an £85,000 salary as Police and Crime Commissioner (PCC) for South Yorkshire back in November of last year.  He hung on to his £12,000pa allowance as a councillor for Rawmarsh ward as long as possible, but eventually stood down after being challenged about how much time he was putting in to his role as PCC – it was revealed he had only made 6 decisions since November, one of the lowest by a PCC in the country, and all PCCs were summoned to Whitehall for a dressing down about their expenses and hospitality which must now be declared publicly.

A number of candidates were put forward within the Rotherham Labour Party but the Party agreed an all-women shortlist and the outcome was that Lisa Wright, Shaun Wright’s wife, was selected as candidate for the by-election.  As well as aiming to succeed her husband as councillor, Lisa Wright’s mother is also a member of the Council and other members of her family have previously served as councillors, in what came to be seen locally as a ‘dynastic’ issue.  This provided fertile territory for UKIP to get a significant protest vote, as they did in the neighbouring Rotherham parliamentary constituency last November, when they came second in the by-election following the disgrace and resignation of Labour’s Dennis Macshane over an expenses’ scandal.

Rotherham Council has also been immersed in a scandal over child protection following the imprisonment of five men of Asian origin in 2010, convicted of sexual grooming of young girls.  The Rotherham Council and the Labour Party that has controlled it since it was created in 1974 have been widely accused of failing to protect children.  The scandal associated with this had provided both UKIP and the BNP with fertile territory for an anti-Asian anti-Labour campaign.  But this accelerated in the Rotherham parliamentary by-election last year when it came to light that the Labour Council had ham-fistedly removed foster children from a couple who were members of UKIP.

However, Labour only has itself to blame for stoking the flames of racism.  During its period of government, it set up the now disbanded UK Borders Agency and the Points Based System to bring in draconian controls on non-EU immigration.  Their Immigration Minister in the final days was Phil Woolas, who ran a disgraceful racist campaign in his Oldham constituency and was subsequently convicted of electoral offences and removed as MP. Labour’s response to the campaign by UKIP and the Tories against immigrants is to say that it failed to control it sufficiently when in office and should have done more to keep migrants from the new EU states of Bulgaria and Romania out of the UK.  In replying to the Tories call for tighter immigration controls, Labour has enthusiastically backed them and in a scandalous development last week promised support to the Tory’s new Immigration Bill in Parliament.  Even Liberal Democrat MP, Vince Cable, had to complain in parliament last week:

“a couple of days ago I was on the radio on the “Jeremy Vine” programme. I was following a female voice that was ranting on about millions of illegal immigrants and the negligence of the Government in letting them all in and not deporting enough people. I thought at the time that it was some fringe party that regarded Mr Nigel Farage as a sort of soggy, left-wing liberal, but I then realised it was the Labour shadow Home Secretary (Yvette Cooper), and I tried to understand where she was coming from. It says quite a lot about the Labour party’s current values that it feels it necessary to apologise for letting in foreigners, but is still reluctant to apologise for wrecking the economy.”

Cable’s complaints are undoubtedly hypocritical, as he sits in the Coalition Cabinet where his own Liberal Democrat party backs the Tories fully on immigration and austerity (and they were rewarded with just 28 votes in the Rawmarsh by-election, one fortieth of the votes of UKIP).

But it is an indication of the depths that Labour has sunk that its message on immigration is virtually indistinguishable from the most right wing Tories.  All that the current language of all three main parties will achieve is to create cynicism and stoke the fires of UKIP, pushing up their vote.

Labour’s general reaction to the UKIP results in the local elections two weeks ago was to delight in the apparent Tory discomfort, but UKIP’s results in the South Shields by-election and in Rotherham indicates that it can take votes from Labour as well as the Tories, especially given the ‘anti-establishment’ rhetoric coming from UKIP and Labour’s 13 years of ineffective government.

The Labour leadership seem to believe that they will coast to victory in the 2015 general election on the back of disillusion with the Coalition parties.  This is a dangerous strategy as can be seen by the result earlier this week in the general election in the Canadian Province of British Columbia.  The social democratic New Democracy Party (NDP – Labour’s sister party, though a little more to the left) went into the election with a 20% lead in opinion polls and confident of victory.  Their leader tacked to the right in order to try to win over the ‘middle ground’, despite strong polling evidence of support for more radical policies from young people in particular.  The result was that the ‘Liberal Party’ (in reality a conservative party) gained seats at the expense of the NDP and won the election.  Undoubtedly the NDP were hamstrung by both their rightward moving campaign, their previous record of government in the province (1991-2001), and their close identification with the more right wing federal NDP.  As the Canadian ‘Socialist Worker’ has pointed out (www.socialist.ca), turnout dropped dramatically and there is no mandate for the Liberals’ austerity and anti-environment agenda.

The shock result in British Columbia stands as a stark reminder to Labour that embracing the same message as the pro-austerity parties will not guarantee electoral success.  Elsewhere, in Europe we can see that the social democratic PASOK party in Greece continues to collapse, while the French Socialist Party’s presidency of Hollande in France is on the rocks within a year of taking office, and the German Social Democratic looks to be struggling to win the General Election in September.

A recent YouGov opinion poll for the London Evening Standard (http://bit.ly/156CIxQ) indicated that 49% of people saying they would vote Labour at the next General Election would support a General Strike against the Coalition Government’s policies.  This is a million miles away from the current trajectory of the Labour leadership.  While Labour’s leadership are moving even further to the right, a huge space has opened up for a left wing alternative including from many erstwhile Labour voters.

The working class needs an effective alternative to the message and actions coming from all four of the pro-austerity parties.  The Trade Union and Socialist Coalition to its credit stood in this by-election but only scored 61 votes (2.5%).  It had previously won a parish council by-election in another part of Rotherham Borough, Maltby, in March, and also stood in the Rotherham parliamentary by-election winning 1.3% (though George Galloway’s Respect party ran a more effective campaign and won over 8%).  TUSC’s election results in the shire county elections last week were generally very poor, with many in the ‘family and friends’ category of a few dozen votes.  There were a few notable encouraging exceptions, but nowhere did TUSC achieve even 10% of the vote.  To a certain extent this is inevitable for an organisation that confines itself to appearing only at election times and does not participate as a party in the day-to-day struggles against the government.  We need a better alternative, and one that can work in a non-sectarian way with those in Labour (and the Greens) who support left wing aims and in initiatives like the People’s Assembly.   The development of Left Unity currently offers the best hope of building that alternative.

(Change in vote compared to previous result in May 2012)

7 responses to “Labour loses election in its heartland to UKIP”