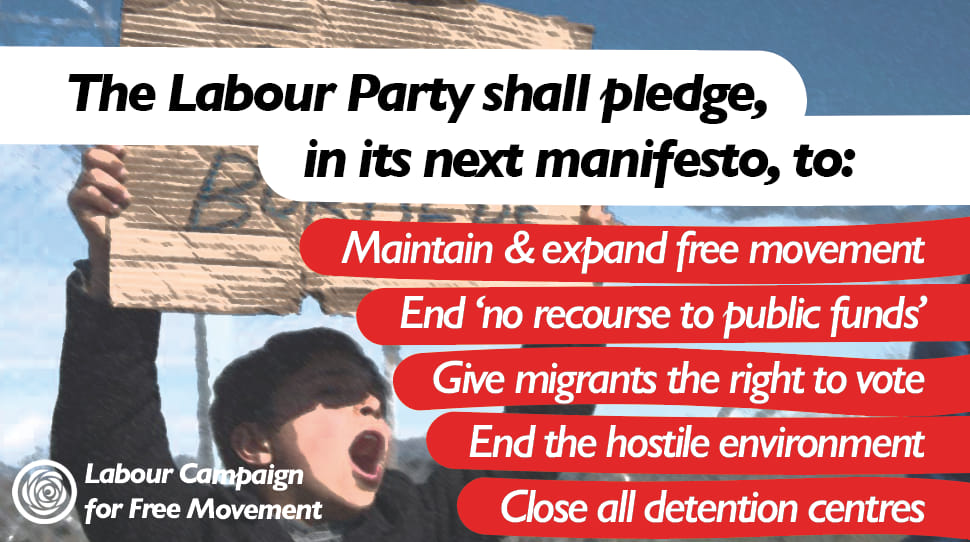 The final day of Labour Party conference saw delegates unanimously passing the Labour Campaign for Free Movement’s Composite 20 on Immigration. This is a masssive step forward for Labour’s policy.

Alena Ivanova, from Labour for Free Movement, said: “Truly, a historic day for Labour. This is the day we bury detention, we bury the ‘control on immigration’ mugs and fight alongside our brothers and sisters for a truly democratic and representative Labour government, which would give me the franchise to vote Labour for the first time in my life.”

Ana Oppenheim, one of the Labour members behind the campaign, called the move a “transformational policy”.

“Free movement, equality and rights for migrants. are socialist values and benefit us all.

Confronted with attacks on migrants – from the racist Hostile Environment to the Conservatives’ Immigration Bill that plans to end free movement and strip the rights of working-class migrants – we stand for solidarity, equality and freedom.

Scapegoating, ending free movement and attacking migrants’ rights are attacks on all workers. They make migrant workers more precarious and vulnerable to hyper-exploitation, pressing down wages and conditions for everyone. They divide us. making it harder to unionise and push back.

Labour offers real solutions to fix the problems which are unfairly and incorrectly blamed on migrants themselves: public funding for good jobs; homes. services and social security
for everyone; scrapping anti-union laws to support workers organising for improved conditions and wages. Migrant workers are already central to trade union campaigns beating low pay and exploitation, in spite of prevailing attitudes and Tory legislation.

Labour will include in the manifesto pledges to:

. Oppose the current Tory immigration legislation and any curbing of rights.

. Campaign for free movement, equality and rights for migrants.

. Reject any immigration system based on incomes. migrants’ utility to business. and number caps/targets.

. End “no recourse to public funds” policies.
. Scrap all Hostile Environment measures, use of landlords and public service providers as border guards, and restrictions on migrants’ NHS access.

. Extend equal rights to vote to all UK residents.”