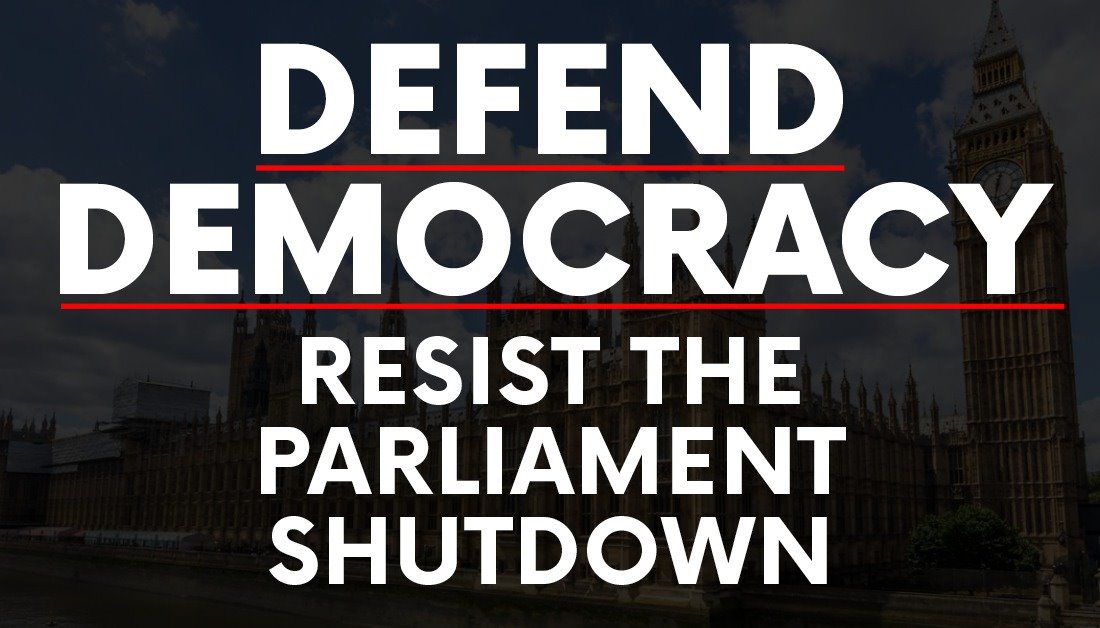 Boris Johnson’s suspension of parliament is the latest stage of a right-wing Tory coup that has been unfolding since the Brexit referendum in 2016. The suspension of parliament will presage a calamitous hard Brexit – very likely followed by a general election. In this, Johnson will posture as the person who carried out the Brexit will of the people, as well as advancing an utterly reactionary programme based on being ‘tough’ on crime and fake spending promises.

Johnson’s suspension of parliament has revealed the utter cynicism of the Tory leaders. If it suits them, they will trumpet the sovereignty of parliament; if not they will suspend it. Apoplectic anger and stern denunciations by opposition politicians will not stop this coup. Labour has taken legal advice on a judicial review, which will almost certainly fail. Mass anger has to be turned into mass action in communities and on the streets to impose the re-opening of parliament.

Brexit, especially a Tory hard Brexit, is the centre-piece of a programme of super-Thatcherism, that the Johnson government is preparing to implement. Their plan is to turn Britain into a deregulated, cheap labour, low-tax, outpost with minimal workplace and environmental regulations. With no EU deal, Johnson would cleave to a trade deal imposed by the United States – reducing Britain to the status of a vassal state. A cornucopia for ruthless billionaires, exporting cheap labour as its major product.

The huge tax cuts for the rich would be immediately paid for by the working class. Cue soaring prices, stagnant or reduced wages, a collapsing health service and social care sector. Cue a huge extension of zero hours contracts, with a reduction or abolition of the national minimum wage further on down the line. Cue rampant racism and attacks on immigrants. Cue new attacks on trade unions and democratic rights. And cue British servility to American militarism and counter-revolution world wide.

Anti-Brexit Tory Dominic Grieve showed the pathetic response of anti-Johnson Tories when he said: ‘I don’t think parliament can stop prorogation although there may be something that parliament can do to register its deep concern.’ Grieve wants a ‘humble petition’ to the Queen to express parliament’s ‘deep concern’. That will set them quaking in their boots in No 10.

Three days before the 2016 Brexit referendum, SNP leader Nicola Sturgeon said it was an attempted coup by the right-wing of the Conservative Party. It was – and it succeeded. The next stage is to carry through a no-deal Brexit, followed by a general election in an atmosphere of xenophobic euphoria. Sealing the most spectacular victory for the radical right in Britain since world war 2.

As a first stage to prevent that tragedy, Labour and the unions should call for a million-person march to Westminster to impose the re-opening of parliament. This is a hugely dangerous situation and time is not on our side. The labour and trade union movement has the power to defeat this hard-right government. The leadership of the Labour Party must call mass rallies throughout the country. Now is the time to act.

Turning the tables on Johnson now can help prepare for resisting the Tory onslaught in the general election.

Left Unity National Secretary Felicity Dowling said: ‘The rights of Parlaiment were hard won. In the 21st century, in the context of the rise of the Right internationally, attacks on the rights of Parliament are especially dangerous.

Johnson and co are radical right-wingers, prepared to strip away workers’ rights and weaponise the rise in racism and social disruption. Poverty and public service crises make the strong-man tactic still more dangerous. Johnson is already using the media, including social media, to build his project.

The Labour movement must respond powerfully to reassert the commitment to democracy and to all our hard won rights. A better world is possible’.

One response to “Defend Democracy: Stop the Coup!”