They say that money makes the world go round, writes David Landau. 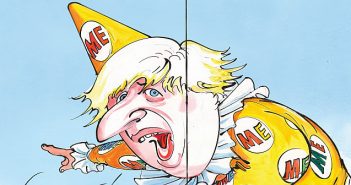 We socialists know that this is not true. Labour keeps wheels of industry turning, keeps the land fertile and fruitful, labour carries and delivers goods and services, keeps us healthy, sheltered and clothed. But to do this, labour is not random, atomised or thoughtless. Neither is it merely that this labour is organised. If it is organised by command and by the whip it fails. It is co-operative labour which is crucial. Labour framed by human solidarity.

Surprising perhaps that it is this solidarised labour which is the source of surplus product and surplus value in all modes of production and in the darkest conditions. So slave labour builds the pyramids, farms the sugar and sows and brings in the cotton. The serfs made the landowners fat. The proletariat generates massive profits across the globe. All these are based on human solidarity in labour even though the surplus they produce is left in the hands of slave owners, landlords and capitalists.

So the essence of socialism stands at the heart of every mode of production. So why is socialism so difficult to achieve? It is not simply that the ruling class has the arms because by rights that army should mutiny and become a workers’ militia. In most periods of history, this does not happen.

Human solidarity is a very powerful force but also contradictory. Despite its strength it is extremely delicate and can morph into its opposite – partial solidarities. Solidarity as a family, solidarity as a nation, solidarity as a religion or an ethnicity. Solidarity which does not bring humanity together as a whole, but interest groups are brought together to fight against each other. Paradoxically human solidarity turns into something that divides people instead of uniting them. The call goes out – America First, Britain First, Europe First. We cry back HUMANITY FIRST! But our cry is in danger of being drowned out by the cries of patriotism.

Marx said (in The Eighteenth Brumaire of Louis Bonaparte), ‘The tradition of all the dead generations weighs like a nightmare on the brain of the living. And just when they are engaged in revolutionising themselves and things, in creating something that has never yet existed, precisely in such periods of revolutionary crisis they anxiously conjure up the spirits of the past to their service and borrow from them names, battle cries and costumes in order to present the new scene of world history in this time-honoured disguise and this borrowed language……In like manner a beginner who has learnt a new language always translates it back into his mother tongue, but he has assimilated the spirit of the new language and can freely express himself in it only when he finds his way in it without recalling the old and forgets his native tongue in the use of the new.’

But it can be worse. Those who wrap themselves up in the union flag, demand to take their country back, dress up in white sheets and hoods call for a return to mythical past, where ‘British values’ ruled over us and Britain ruled the waves, those who want ‘their country back’…. these are not Marx’s proto-revolutionaries, carrying out the revolution disguised as a force from a previous era. No, rather the reverse, they claim to be in revolt against the elites whilst carrying out the counter-revolution of Farage, Johnson and even Tommy Robinson who are a mere faction of those very elites.

“The dominant ideology is the ideology of the ruling class”, said Marx. But this is only half the truth. What we are up against is not simply an ideology, a system of ideas, but an emotional psychological landscape which gives these ideas power. Thus in times of instability, racism and the whole range of prejudice form a system of consolation and stability, an anchor in a rough sea of contradictions, in times of uncertainty and power vacuums. A power lies behind the ideas of control, possession and identity – ‘I want my country back’. A framework of identity can remain unconscious in a period of social peace, but when the social relations are thrown into disarray and people’s lives filled with despair, so there is a need to make identity a certain thing that must be articulated.

But this emotional/psychological landscape does not stand without material support. Whilst this landscape underpins the power of ideas, so in turn, the landscape is moulded by deep material structures such as colonialism and patriarchy.

First time as tragedy, second time as farce? Farage regularly conjures up the spirit of Enoch Powell. Powell is his favourite politician and the rivers of blood his greatest moment. Listen to Farage’s anti-migrant racist speeches and you will hear they are based on that bloody speech of Powell. Farage’s avuncular bloke down the pub can get under the radar; more dangerous than the snarling Powell.

So today it seems the order is reversed. First time as farce and second time as tragedy

Boris plays the buffoon. He is the clown made a fool of on Have I Got News for You. Now he is Prime Minister. First time as farce, second time as tragedy?

Theresa May calls a general election. She loses her majority. Jeremy makes great strides forward. Johnson calls a general election? What result can get him Brexit by Halloween? – The Brexit Party winning seats, the Tory remainers lose seats. Farage joins the Government and together they push No Deal Thru? This is a tragedy waiting to happen. If Labour cannot be decisive and shake off the dead hand of its saboteurs a snap election could smash so many working class gains, human rights and put prejudice and reaction into the driving seat.

9 August 2019
To submit an article for the 'Discussion & Debate' section of our website please email it to info@leftunity.org