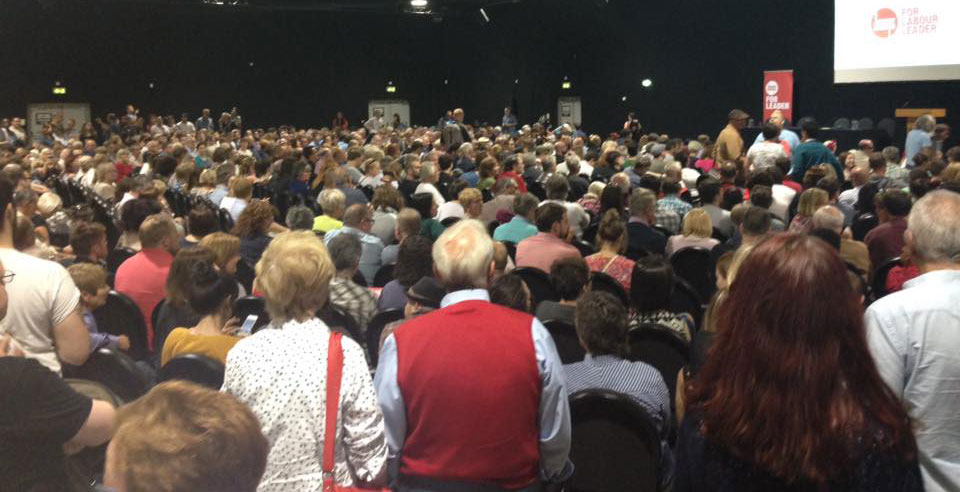 A huge meeting for Corbyn in Leeds

This is the text of a motion passed by Left Unity’s executive committee on Saturday.

The campaign to elect Jeremy Corbyn as the leader of the Labour Party has drawn tens of thousands of people into political activity.

Throughout Europe we have seen the emergence of new parties and movements in response to the capitulation of social democracy to the neoliberal austerity offensive. It is in this context that the candidacy of Jeremy Corbyn for the Labour leadership must be seen.

Britain has seemed immune to these wider European political developments and it was in this context that Left Unity was founded – to attempt to address this absence. A deflected radicalisation found some focus in the pre-election surge in Green Party and in the electoral success of the Scottish National Party.

From the moment that Jeremy announced his intention to stand he was met with an incredible enthusiasm not just by members of the Labour Party itself but throughout the whole left and beyond.

His campaign has reached thousands of young people new to politics. Much of the trade union movement is backing him and his campaign expresses the hopes of millions of people suffering because of the policies of this government.

The alternative policies that Corbyn represents – anti-austerity, anti-war, defending the welfare state, repealing the anti-trade union laws and calling for nationalisation of essential services are policies that Left Unity fights for too. These are policies that we all share. He is bringing those policies not only to the Labour membership, but widely across British society.

His campaign offers renewal for the left in Britain. We are seeing the emergence of a real mass movement – many towns and cities are seeing their largest political meetings for a generation.

A rejection of social democracy’s neoliberal turn so prominently within a social democratic party is an important development and the eyes of the left in Europe will be upon this leadership contest.

When Left Unity was founded we understood clearly that to become a serious political force we would need to forge strategic alliances throughout the left.

We need to support this process – to raise the level of political debate, to assist in shifting the balance of the political narrative, and supporting the strengthening of the socialist voice and values within the Labour Party.

Left Unity recognises the enormous opportunity for the left, the movements and more importantly, the working class as a whole that the Corbyn campaign represents.

The right in the Labour Party will use any means necessary to halt this new movement. Already there are moves for the election campaign to be stopped because of bogus claims of far left infiltration and many Labour Party grandees have been wheeled out to warn against a Corbyn victory.

If Jeremy wins the leadership despite the endless propaganda against him in the wider media and the political elite we will still only be at the beginning of the struggle to implement the changes in society that we all want to see.

His victory would unleash a wave of enthusiasm in wider society but there would be a virtual state of civil war inside the Labour Party with MPs attempting to remove him at the first opportunity. The majority of the parliamentary party is opposed to the politics of the Corbyn campaign and that presents a serious long-term obstacle for the Labour left.

Left Unity understands that some of its members will view joining the Labour Party as the avenue for supporting this new movement. Some have already left in order to campaign and vote for Jeremy. We wish them well and recognise that in ending their membership they are not renouncing the shared politics which drew them towards our party in the first place.

However we believe that this new movement around the leadership campaign in the Labour Party represents a new political moment which goes well beyond the structure of the Labour Party itself. The success of Jeremy’s campaign has been because it is rooted in the social movements and for it to succeed more fully it will need to sustain and draw sustenance from those movements.

Left Unity is an activist campaigning party and will remain so. Our founding aim to build a broad party of the left remains our key strategic task, as we work alongside those in the Labour Party and other organisations where we share common policy aspirations.

There is a pressing need for a wide ranging discussion on the left about how those who share a political perspective both inside and outside the Labour Party can work to ensure the success of those common goals.

We shall establish an on-line journal to continue a debate on the left on these central questions. We will be supporting all our branches and regions in initiating a public discussion on how best to support and develop this new movement.

We will introduce a ‘friends of Left Unity’ category whereby those who have chosen not to remain members can continue to receive our newsletter and participate in joint discussion and common action on issues that unite us.

7 responses to “Jeremy Corbyn: a new moment, a new movement”