Ireland – Dancing on the Volcano 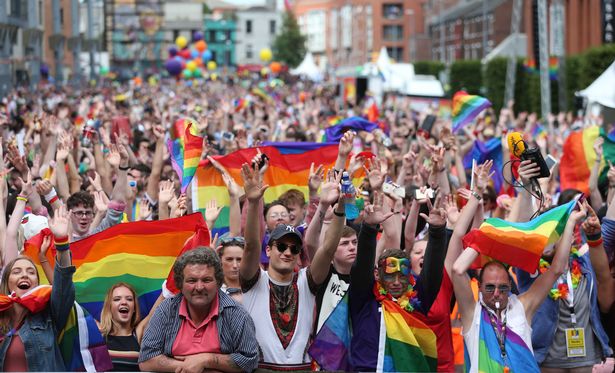 I am writing this article on the verge of leaving for Ireland to visit the border town of Newry, Co. Down for British and Irish Pride as a delegate of my union UNITE, writes Left Unity National speaker Joseph Healy. As I leave London following last night’s protests about the suspension of parliamentary democracy my mind is full of questions about the future of both my country of birth (Ireland) and the country I have lived in for the last 35 years (UK). For many years some socialists in the North of Ireland claimed that the UK was a progressive state and that for any real social or political progress the six counties of the partitioned island of Ireland needed to be linked to that state as the alternative was a backward, priest-ridden state in the South where divorce, contraception and abortion were all banned and the Irish Republic was by its nature a state ruled over by the Catholic Church where no non-Catholic would ever achieve equality.

How ironic that this world view has been turned on its head. Indeed in many ways those holding such views now remind me of the deluded Brexiteers who still believe, despite the right-wing coup raging in the UK, that Brexit is a process which will lead seamlessly to socialism and a state founded on the principles of British liberty and equality. Instead the Republic, for all its faults, is turning into a modern, social democratic European state with both marriage equality and abortion referenda having been passed by large majorities in the recent future and the role of the Catholic Church being confined to the back burner of history. It also has a written constitution and a President whose role is to protect the constitution against the actions of any executive power, unlike the UK’s feudal constitution. Yes the Republic has huge problems in terms of economic inequality, housing and labour rights etc but which of the two states is heading in the right direction now? Northern Ireland is the poorest region of the UK state with levels of unemployment and poverty unmatched anywhere else. It also remains a deeply sectarian, partitionist entity with wealth remaining concentrated in the area east of the River Bann which is the area mainly represented by the DUP. The DUP, which many refer to as the party of the 17th century, has ruled the roost in the North of Ireland for many years. This party, now supporting the suspension of parliament and being promised another bung by Boris Johnson, remains deeply compromised by its period in office in the Stormont administration where it presided over graft and corruption on a huge scale. It has also blocked for over two years the formation of another administration by refusing to budge on marriage equality and abortion rights and by steadfastly refusing to give speakers of the Irish language their rights. It is no surprise that they are viewed with contempt by growing numbers of young people in the North of Ireland. Their days may also be numbered.

The last parliamentary elections in 2017 showed 7 Sinn Fein MPs being returned, including, how ironic, one for the constituency of South Down, the old constituency of Enoch Powell. In fact one can draw parallels between the politics of Powell, Johnson’s Tory Party and the DUP. The only difference is that whereas Powell and the DUP believed fervently in maintaining the Union, Johnson and his supporters do not. The support of the DUP is a short term measure and there are many who believer that he will throw them aside when it suits him. Both demography and economics are against the continuation of the partitionist state. It shows that times have really changed when even a centrist journalist like Simon Jenkins can argue that partition was supposed to be a temporary measure and that the time has come for a united Ireland. Brexit, with all it means for the restoration of a hard border, a return to violence and the collapse of the economy in the North of Ireland, may be the final nail in the coffin of the Unionist enclave formed by another imperialist British government in 1921 whose centenary we are fast approaching.

One recent event showed the potential for a new North of Ireland and a new Irish state. The first visit of Boris Johnson as PM to the North of Ireland was met by two demonstrations outside Stormont. One was by the workers from the Harland and Wolff shipyard in Belfast which was facing closure and the other by language activists with links to Sinn Fein calling for equality for the Irish language. The shipyard workers were organised by their union UNITE and come from a traditionally very Unionist workforce. At one point the shipyard workers joined the language activists calling out in Irish “Save our shipyard”. This was a glimpse of a future new Irish state uniting both traditions and with links to the labour movement. Not for nothing has it been said that Johnson may be the last Prime Minister of the UK state. The growing dictatorial nature of the UK state, its wilful ignorance of Ireland and it xenophobic pursuit of hard Brexit may be the signal for the reunification of the island of Ireland and the creation of a new Irish Republic where in the words of Wolfe Tone in 1798 Catholic, Protestant and Dissenter would be equal.

One response to “Ireland – Dancing on the Volcano”