Growing opposition to evictions in Spain: Andalusia takes the lead

One of the biggest components of opposition to the austerity measures in Spain has centred around housing, with the harsh mortgage laws having led to mass evictions. In a recent development in Andalucia, Izquierda Unida has been instrumental in passing a law to expropriate repossessed houses from the banks. Elsewhere Spanish workers are refusing to cooperate with evictions. 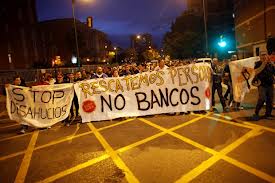 Spanish law gives mortgage lenders the right to start accelerated proceedings to evict a borrower who has missed a  single payment. Home owners under threat of repossession cannot stop the eviction process while they fight contentious clauses in their mortgage contracts, a provision that was ruled to be against European law by the European Court of Justice in March. An estimated 350,000 families have been evicted in the past five years, with courts issuing a record number of eviction notices in 2012. Some mortgage contracts contain clauses allowing for a sharp increase in interest if a borrower falls behind on payments and once houses have been repossessed, the outstanding debt remains. A number of suicides have resulted from evictions and the associated debts.

In a recent move to stem the increase in homelessness, the Andalusian regional government  has passed a law which enables it to expropriate property from banks and mortgage companies in order to stop evictions.  The decree, passed in April this year, allows the expropriation of properties from which vulnerable people – which include all those on monthly net incomes of less than €1,600 – are about to be evicted, for up to three years. The occupants will be allowed to stay in their homes, and required to pay a rent of 25% of their household income, which will go to the lender from whom the property has been expropriated. The measure also imposes fines of between €1,000 to €9,000 euros on banks and real estate firms that hold on to empty homes that are fit to live in.

Andalusia is the biggest of the Spanish regions, and also one of the poorest. Its unemployment rate – around 36% – is the highest in Spain. It is governed by a coalition of the Spanish Socialist Party (nearest UK equivalent is the Labour Party) and Izquierda Unida (the United Left), which holds the housing portfolio and has driven through the new legislation.  The expropriation decree has been opposed by the right-wing Popular Party government, which has called in the Prime Minister, Mariano Rajoy, to file a claim that it is unconstitutional on the grounds that it violates the right to property ownership.

In response to protests outside the homes and offices of Popular Party lawmakers by the  Plataforma de Afectados por la Hipoteca (Platform of Mortgage Victims) the government has banned gatherings within three blocks of any politician’s home.

Meanwhile, in the small Andalusian town of Marinaleda, the mayor, Juan Manuel Sánchez Gordillo, continues with his project to provide ‘free’ self-build houses. Families are provided with land by the municipality, which also employs professional builders to work alongside them and provide expertise. The bricks and mortar are a gift from the Andalusian government; once finished the owner will pay a small monthly amount to the regional government, to refund the cost of other building materials. Sanchez Gordillo, leader of the CUT-BAI (Colectivo de Unidad de los Trabajadores-Bloque Andaluz de Izquierdas, Collective for the Unity of Workers – Andalusian Left Bloc) is also an Izquierda Unida deputy in the Andalusian government.

In a number of parts of Spain trades unionists have stopped collaborating with evictions. Members of the locksmiths union in Pamplona (Basque Country) have refused to change locks, thus allowing evicted families to re-enter their homes. President of the Locksmiths Union, David Ormaechea, said that lives were being ruined and, referring to suicides, that “we were acting as executioners”. When the authorities subsequently called on the fire service to step in and break open doors, fire fighters also refused. They have now been joined by colleagues in Cataluña and Madrid. Antonio del Rio, a labour union representative for the Cataluña fire service, told the media that, “We come to the aid of people in emergencies. It is contradictory to help the banks that are putting people’s lives in danger” [by evicting them].