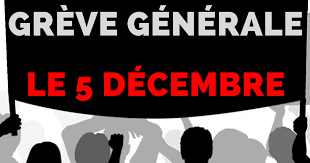 Left Unity stands in solidarity with the strikers – a crucial struggle almost completely unreported in the English media.

“In France today, the executive is afraid. Launched on the forced implementation of counter-reforms aimed at ‘catching up’ with what Thatcher did in Great Britain and Schroeder in Germany, to break everything – the right to retirement, labour law, the right to study … – it is like a train launched at full speed against the wall, the cliff, the pillar, the base, the rock of the resistance and the social counterattack, which bears a name in the form of a date: 5 December.”

There is a general strike planned for 5th December, trades unions rising up against Macron’s austerity policies. He wants to (1) change employment law to make it easier to dismiss staff, that is making the workforce more precarious (2) change pension law which will deprive people of their retirement rights.

These issues have already sparked a huge wave of outrage and a thirst for political discussion: there is almost a pre-revolutionary situation even before  the general strike.

Traditional trade union organisations such as the CFDT are no longer able to restrain the actions of their members such is the ferment in society.

The actions of the gilets jaunes, which commenced over a year ago have not melted away but rather are an underlying feature of the new wave of militancy that is brewing. These include many of the rural poor, not especially connected to the official trade union movement. They started by protesting against fuel taxes, ostensibly for reducing carbon emissions but utterly skewed against the poorest. These measures would have widened the gap between rich and poor. Macron was forced to back down on this at the early stages, last December,  a big humiliation for him: effectively abandoning the central principles of the programme upon which he was elected! These protests have stopped traffic in the capital and have turned traffic roundabouts into places for community solidarity and conviviality.

Young people at first participated in the gilet jaunes movement, but this youth involvement dropped as a result of fears that university entry would be put at risk for those protesting and also because of police brutality. But now there is a revival of the spirit of protest by young people.

Because of its revolutionary traditions the French working class has until now managed to resist the worst effects of the austerity policies that other capitalist countries have been step by step enforcing since Thatcher. Now the French ruling class is desperate to ‘catch up’ with other capitalist countries. Crunch time is approaching. December 5th is the big day. The Anglophone official media will try to avoid reporting it: especially the demands of the working class for a more equal and more just society. They may show pictures of a few smashed windows and some violence but they will desperately try to avoid telling the story of a mighty clash between proponents of austerity and an extremely angry, militant and politicised population lead by the workers.