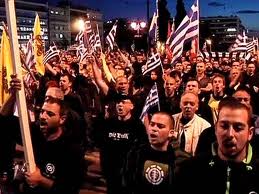 Andrew Burgin from Crouch End Left Unity asks whether the arrest of the leader of the Golden Dawn movement in Greece will see the end of its political influence.

The arrests of Golden Dawn leader Nikolaos Mihaloliakos and other members on charges of heading a criminal organisation marks the first serious attempt by the Greek ruling class to crack down on the murderous activities of the neo-fascist party. The ruling elite have been pushed into action against Golden Dawn by the revulsion of the majority of the people in Greece to the brutal killing of Pavlos Fyssas, the popular anti-fascist rap artist. Pavlos was murdered by a Golden Dawn member.

Since the end of 2009 Greece has seen an unprecedented economic collapse. Its economy has been bailed out twice to the tune of 325 billion Euros and Greece now faces the prospect of needing a third bailout. The Greek economy is effectively under the control of the Troika; the EU, the ECB and the IMF. The strategy of the Troika is to drip feed the economy, sustaining the many international creditors, whilst demanding that the Samaras government implement savage austerity measures. The health system has been dismantled, hundreds of thousands have seen their jobs disappear and millions seen their pensions halved. Unemployment stands at 28% and youth unemployment is at 55%. Wages and salaries for those in work have been decimated. The Greece Solidarity Campaign in which I work has received requests from Greece that we concentrate our work on helping alleviate  the acute and growing problem of child malnutrition.

The rise of Golden Dawn

In the 2009 elections Golden Dawn received 4.500 votes, roughly 0.1 per cent. By 2012 their vote had risen to 440,000, 7% of the total vote. Recent opinion polls put them regularly at 12% and some polls put support for the fascists  at between 15% and 20%. Economic and social collapse in Greece is fuelling the growth of the extreme right.

Since the murder of Pavlos their support has collapsed back to 6-7% but they are still the third largest political party in Greece after New Democracy and Syriza.

The support for Golden Dawn has been built on a strategy of racism, anti-semitism and xenophobia There has been large scale immigration into Greece and the EU  ‘Fortress Europe’ policy has prevented many immigrants from moving on to other countries. Golden Dawn has scapegoated the immigrant community for all the ills imposed on Greece by the Troika. The EU has funded special detention camps for many immigrants in Greece where they are housed in appalling conditions and treated with the utmost brutality.

In the cities existing immigrant communities have been systematically attacked by Golden Dawn and many immigrants beaten up and sometimes murdered. Golden Dawn has ethnically cleansed the areas where they are strongest political force. They have set up Greek only food banks and entered hospitals and evicted immigrants seeking health care. Hand in hand with this has been a policy of physical attacks on the labour and trade union movement. Last week seven members of the Communist Party of Greece [KKE] were hospitalised after being attacked by a large gang of Golden Dawn thugs wielding crowbars. The LGBT community have also faced an alarming rise in attacks. At a recent rally  Golden Dawn parliamentarian Ilias Panayiotaras, launched into a homophobic tirade  shouting “Wrap it up you little faggots” and “Your time is coming”.

This civil war strategy against both the immigrant community and the labour movement and others has been accompanied by populist rhetoric against the memorandum agreement and the Troika.

Collusion of the State

Such is the depth of the economic and financial crisis still facing Europe that sections of the ruling elite in Europe are once again colluding with the far right. Right up until the murder of Pavlos the Greek state had turned a blind eye to the activities of Golden Dawn. This has now changed and some of those state officials who have supported Golden Dawn are also under investigation.  In recent days two security chiefs from the National Intelligence Service have been sacked and nine police commanders reassigned including the third most senior police officer in Greece. The popular demand is for a complete cleansing of state institutions from fascist infiltration –  the links between state and Golden Dawn go very deep.

There are verifiable reports that elements within the police and the army have been training and arming Golden Dawn paramilitary forces. There is video footage of Golden Dawn forces fighting alongside the police against anti-fascist protesters. In the 2012 elections it is reported that as many as half of all police officers voted for Golden Dawn. Anti-fascist protesters have been routinely tortured in police cells after being arrested. 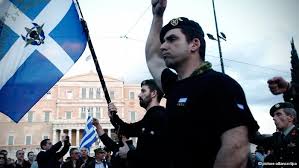 Golden Dawn has strong support not just in the police but also in the Special Forces reservists. The Special Forces have issued a call for the existing government to be replaced by one under military control. They were due to march in central Athens on September 28 calling for a military backed government to replace the Samaras coalition government but their march was banned. No doubt this ban and the arrests of Golden Dawn members are linked. Not even Samaras could countenance serried ranks of commandos marching through the capital calling for the overthrow of the government.

The arrest of Mihaloliakos is to be welcomed not least because it represents the pressure on the government by those anti-fascist supporters who took to the streets last week. Tens of thousands of trade unionists and anti-fascists marched on the Golden Dawn headquarters. Protests took place throughout Greece.

The arrests are also a belated recognition by the ruling elite in Greece that their interests and those of Golden Dawn are not yet interlocked. Maybe it was also understood that Golden Dawn, like the Nazi party in Germany in the 1930s, could outgrow its protectors. Certainly in recent months many New Democracy members and more importantly some political and financial backers had switched their allegiance to Golden Dawn.

Nevertheless Samaras and New Democracy continue to propagate the ‘theory of the two extremes’, accusing Syriza and the left of using the same methods as Golden Dawn. No doubt measures taken against Golden Dawn will be ‘balanced’ by measures taken against anti-fascists and others on the left. Already the spokesperson for Keerfa, one of the main anti-fascist organisations, Petros Constantinou, has been threatened with prosecution for defending the rights of immigrants. Recently Savas Michael the leader of the small Revolutionary Workers’ Party was prosecuted for ‘incitement to violence’ for calling for Golden Dawn to be smashed. And activists from the struggle against gold mining  in Halkidiki have been imprisoned.

The turn against Golden Dawn by the Greek state may be a temporary response to the popular reaction against fascism. So far the deputy leader of the party has not been arrested and the state prosecutor is promising a ‘fair trial’ which could become a soap box for Golden Dawn to make more propaganda. Arresting and even jailing fascist leaders does not destroy their political movement – that can only ultimately be achieved by providing an alternative solution to the economic and social crisis. In the meantime the fascist squads have to be driven off the streets.

This week did see the fascists confronted  by a mass movement bringing together many tens of thousands who oppose Golden Dawn. The growth of the far right has to be confronted both politically and economically.

The social and economic problems which fuel the growth of fascism are to be resolved by rejecting austerity and challenging the legitimacy of an economic system which is forcing millions into penury and despair. Greek workers have attempted through countless general strikes to drive the movement against austerity forward. It looked possible that the 2012 elections might lead to a workers’ led government. The massive increase in support for the Syriza  was due to the party’s promise to end the memorandum and lead such a government but the right gained a narrow victory.

This anti-fascist and anti-capitalist battle is being fought on a pan-European basis as well. The extreme right is gaining ground throughout Europe. In Hungary the anti-semitic Jobbik movement garnered 17% of the national vote in recent elections, in Finland the true Finns have become the third largest party and in France the Front National achieved its highest vote in the 2012 Presidential election. There is a call for a European anti-fascist movement based on the trades unions which deserves widespread support and the European day of action on November 14th 2012 which saw millions of workers throughout Europe take strike action against austerity was an important step forward.

Many in Greece are heartened by the arrests of the Golden Dawn leaders. The Greek people have a long and honourable history of anti-fascist struggle and the arrests are a product of pressure on the government from the people to take action.

In the 1930s the German labour movement, the most powerful ever built, was smashed by fascism. It was divided. In Greece today there are similar divisions. Syriza is the largest party on the left will stand at the next elections as will the Communist Party [KKE] which has strong support in many working class areas. The much smaller Antarsya grouping which is an important component of the anti-fascist struggle will also put up candidates even though their vote in June 2012 was miniscule. A sad situation with potentially tragic consequences.

Overcoming those divisions which exist not just in Greece but elsewhere on the European left is a necessary step to providing a real solution to the crisis of representation that the working class has faced for many decades.  The difficult task in Greece and elsewhere is to find the political basis, a united front strategy, to unify the left in order to fight both the extreme right and against austerity.

However there is no doubt that until the left resolves this question Golden Dawn will, despite the arrests today, continue to find fertile ground for they call their ‘socialist nationalism’. Fascism has to be pulled out by its social roots.