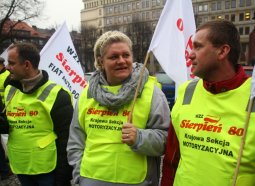 The Silesia region in the South-West of Poland is preparing for a general strike. This will be the first such strike in Poland for 32 years. It is being organised by all the major trade unions – NSZZ “Solidarnosc” (“Solidarity”),  Ogólnopolskie Porozumienie Zwiazków Zawodowych (All-Poland Alliance of Trade Unions), Forum Zwiazków Zawodowych (Trade Union Forum) and a radical left Wolny zwiazek zawodowy sierpien 80 (Free Trade Union “August 80”).

The strike was preceded by referendums in workplaces (over 120 000 already took part in the voting, it is expected that about 170,000-200,000 will participate). The planned protest has been already supported by miners, steel workers, railroad workers, hospital workers, public communication workers and other groups of workers.

The main purpose of the trade union cooperation in Silesia is to protect inhabitants of the region against the economic crisis and the loss of jobs, protecting enterprises operating in the region and opposing the drastic increase of the costs of living and violation of workers’ rights in Poland. The leaders of the trade unions in Silesia have no doubt that only common action gives a chance of the effective defence against the neo-liberal policies.

The demands of the strikers are (it’s a compromise between different unions, some of them are more moderate and some from a more radical tradition) :

1. Creating a system of financial regulation and tax breaks for companies maintaining employment during the period of involuntary production downtime.

2. Introducing a system of compensation for businesses impacted by the Energy and Climate Package.

3. Restrictions on the use of contracts called in Polish “umowa smieciowa” (junk or trash contracts) which doesn’t give people a solid and stable job and full workers rights and is becoming a bigger problem, especially among young employees.

4. Elimination of the Narodowy Fundusz Zdrowia (National Health Fund) so that contributions on public health system can be placed in an equal way in every region.

5. Maintenance of pension arrangements, available to employees of the special conditions and special character (for example miners).

6. Stop the elimination of schools and stop the shifting of public education funding to local governments.

The government, represented by the Deputy Prime Minister Janusz Piechocinski and Minister of Labour and Social Security Wladyslaw Kosiniak-Kamysz, started talks with trade unions on 30 January (another meeting is scheduled on 11 March). A few working groups (on industry and the labour market, stable employment, health, pensions and education) were established. But trade unions do not believe that the government will take there proposal seriously, so that the 4-hour protest will probably take place in the end of March