Flirting with Fascism – the arrival of Boris Johnson 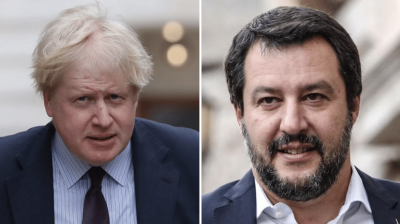 Left Unity Principal Speaker Joseph Healy writes on the latest developments: Nick Cohen, a journalist with whom I seldom agree, has on this occasion hit the nail on the head with his article in the Guardian on the Boris Johnson government which took office this week. “Farage has won and this is a government of Faragists”, writes Cohen. The prediction which historian Neil Faulkner made several years ago with his book Creeping Fascism has become reality in the USA and now also in the UK. Weeks before during the internal election campaign for the leadership of the Tory Party there was a report of Priti Patel (representing Johnson), Farage and a couple of others holding a secret meeting in an upmarket London club.

Clearly the purpose of this meeting was to form some sort of agreement between the forces of reaction supporting a No Deal Brexit: the Brexit Party and the far-right element in the Tory Party. The same Priti Patel is now Home Secretary. This was emphasised again by Trump’s speech in the US a few days ago where he praised Johnson to the skies, calling him “Trump Britain”, but also called out to Nigel Farage who was in the audience: “Where’s Nigel?” asked Trump, “Nigel Farage. I am sure that Nigel and Boris can work well together!”. Trump was clearly stating what is now obvious, that the chess pieces which Steve Bannon and the international Alt Right (fascists) have been moving across the board in Europe for the last few years are winning the game for them! One of the first to congratulate Johnson was Salvini.

Back in January, an Italian comrade warned me about the European-wide network which Bannon was constructing and how they had offices in Brussels, Rome and Budapest as well as a training centre in Italy for far-right activists. He warned me that the far right were so far ahead of theleft both in terms of IT, messaging and organisation that the European Left were still stuck in the 19th century. I am sure that Bannon will now open an office in London and see the election of Johnson as mission accomplished! When I joined thousands of others on Wednesday night to protest against the appointment of Johnson as Prime Minister, I was interviewed for Another Europe by a television crew following the demo. They asked me why I didn’t like Johnson and then which aspect of his politics I disliked the most. I replied that his accommodation with the far right and Bannon and Farage was the issue which I was most concerned about.

Clearly the battle lines are drawn around Brexit and the promise of a No Deal Brexit by October 31st. Johnson and his supporters in the Tory and Brexit parties now believe that by bluster and sheer force of his populist personality, Johnson can force the EU to bend to his will. Once again we witness the English exceptionalism which Johnson has always supported with his “we can have our cake and eat it” view of the Brexit negotiations. But the EU is not for bending; the main obstacle is Ireland and the Irish border. The Tories and Brexiteers have always believed that Ireland is a nuisance standing in the way of the Withdrawal Agreement and can be pushed aside. But here they have miscalculated badly. Having the usual imperial and colonial mindset they have assumed that Ireland can be bullied into submission and that Ireland is so dependent on UK trade that it will have to give way and drop any objections it has to the Backstop. The fact that the Backstop is also there to protect the Good Friday Agreement and the Nationalist population in the North of Ireland is of no consequence for them. However, Ireland is determined to keep an open border and the amount of trade which Ireland conducts with the UK has declined dramatically since Ireland joined the EU. The maintenance of an open border is an existential issue for any Irish government and any attempt to water that down would lead to uproar in Ireland. However, the Good Friday Agreement and peace in Ireland are not even of secondary concern to this government. This, despite Johnson having added the title “First Minister of the Union” to his other title of Prime Minister. They will press ahead in cahoots with the DUP who will promise them that all will be well as long as they receive a new bung!

It is not for nothing that many have predicted that Johnson will be the last PM of the United Kingdom. Leaving the EU on No Deal Terms would lead to the inevitable breakup of the UK state, with Scotland and the North of Ireland leaving after what could possibly be a bloody campaign. How ironic that we are now celebrating the centenary of the Irish War of Independence where another blundering imperialist British government used all-out war to prevent Ireland from seceding! At least then there was an Empire whereas the Poundland Churchill, who is Boris Johnson, would have to mobilise his much reduced police and security forces against both the Scottish and Irish peoples with a weak and devalued economy behind him.

The strategy, which has already been blurted out by one minister, is to have a giveaway emergency budget in the autumn which, like Johnson himself, will promise all things to all people. Suddenly social care, the NHS, the railways etc will be awash with funds. It will be as if austerity never happened. But this will be the opening to a ferocious general election campaign which will run on the same theme as that on which Heath went to the country in the 70s – “Who runs Britain?” This will probably be after Parliament has refused to back a No Deal Brexit. Parliament and opposition parties will be cast as the supporters of the elites and Cummings will throw the kitchen sink at them and there will be no holds barred in the election campaign which will see a new low in British politics which will make Goldsmith’s London Mayoral campaign look like a tea party! Johnson’s cabinet is full of vicious far right and unscrupulous ministers and they will employ every weapon to undermine Labour and the opposition parties. The prize for the Poundland Churchill will be “a liberated Britain”, one where all regulations relating to labour laws, and health will be junked and a new no holds barred trade deal with the US held up as the glittering prize! The content of that trade deal will, of course, include the NHS.

The enemies without (the EU, the Irish) will be castigated while the enemy within (the Left, the unions) will be condemned as “traitors”.

Make no mistake, we are facing towards Full Fat Fascism and the coming election and decisions on No Deal Brexit will be as significant for the UK as the period in 1940 when it faced Fascism. But Johnson is not the new Churchill – he is the new Halifax!

2 responses to “Flirting with Fascism – the arrival of Boris Johnson”