Film: The Condition of the Working Class

This documentary film, based on Friedrich Engels’ book “The Condition of the Working Class in England”, is made by Mike Wayne and Deirdre O’Neill, both members of Southwark Left Unity. Here it is reviewed by Mark Boothroyd. 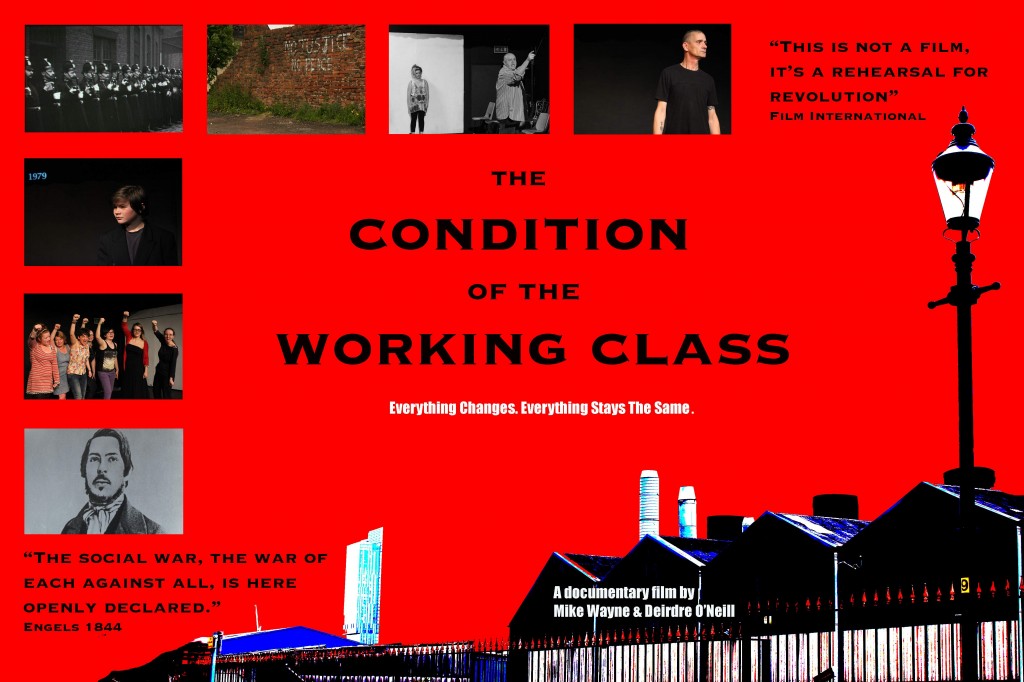 “Well the way this government is at the moment, I’m afraid, I think its absolutely disgusting, they’re taking money off us here there and everywhere and they just don’t give a damn, not for the working class they don’t, and it’s the rich getting richer and the poor are getting poorer.”

The condition of the working class is the unspoken subject of many newspaper articles. From the open class prejudice of the Daily Mail and its disdain for “chavs” and “scroungers”, to the liberal hand wringing of the Guardian confronted with the purported racism of the “white working-class”, the media is full of stereotypes and half-truths about the people who make up the working-classes in 21st century Britain.

This documentary quickly shreds those stereotypes, through the radical act of allowing working-class people to speak for themselves about their own lives and experiences, and what they themselves think of the current situation the working-class is living through.

With no narration, the story is told by the cast and a selection of local people whose lives reflect the frustration and injustice of working-class life since the beginning of the crisis, and the long term decline of industry in the North and the social ills which accompanied it.

While a poet, a member of the trades council and an academic from Manchester University help provide some of the historical and political context to what has happened, and is still happening to the working-class, the central theme is allowing “ordinary” working-class people to speak to their own thoughts and experiences.

Filming covered 8 weeks during which a group of volunteers drawn from Salford and Manchester prepared to perform a play based on their own experiences and Friedrich Engels’ book “The Condition of the Working Class in England”, first published in 1844. Calling themselves the Ragged Collective after Robert Tressell’s Ragged Trousered Philanthropist, they represent a small but diverse part of the working-class.

Rather than perform a play of the book, the cast are encouraged to develop scenes from their own experiences, take turns acting them out and structure them into a critique of capitalism and the class system.

In the footage of rehearsals, team building games and interviews we see a sense of solidarity and understanding develop through the realisation of shared experiences and their common place in the class system. A hint of the strength that can come through collective organising can be seen.

The film shows a working-class rediscovering their history, becoming conscious of their class position, and the nature of the system. Older cast members speak of rediscovering their passion and desire to change things, while younger members are startled and shocked at how little has changed between their experiences and those of the working class in 1844.

The level of awareness displayed by the participants should dispel from anyone’s mind the idea that the working-class doesn’t know what is happening to them, and what is conditioning their existence.

Stories are heartfelt, the drama and hardship of millions are reflected in the experiences of a few. Stories of class prejudice, crushed ambition and blocked futures, frustration and barely constrained anger at the injustices of the system.

Students Faye and Rosie relate the feeling of not fitting in at university and being excluded for their northern accents. J.D recounts her experience of sexism in the workplace, and the horrible feeling of being trapped by economic necessity. Aisling and Saira critique the middle-class dominated art and media world which fails to portray working-class people accurately. Lorraine’s tells of her stigmatising experience of class prejudice at school 50 years ago, and the cruel actions of her stepfather which ended any chance of a career. Ray’s account of factory management’s reaction to Thatcher’s election victory in 1979 leaves little doubt as to the collusion between employers and government in maintaining the exploitation of the working-class.

Two old men sat on a bench in Eccles high street list the industries lost from the area –  thousands of jobs in manufacturing and shipping gone, replaced by apartment blocks and the BBC’s new headquarters. A young man connects his father’s frustration at being confined to his menial job to the experiences of factory workers in Engels text, 150 years ago. A shop owner’s anger overflows at what she sees being done to her community by austerity.

The play is theatre as a political act. A display of anger against the class system that binds and confines humans, restricting their copious talents to the mediocre requirements of wage labour. It speaks to a desire for equality and justice, to change the system for the better, for everyone.

This is just one section of working-classes experience. The people who volunteered are a section of the working-class which has gone onto further and higher education, and who could take the time to participate in the project. Not everyone could do this, constrained as they are by the need to make a living. The filmmakers acknowledged during a Q&A session that they lacked the roots in the city to draw in working class people who were in a poorer or more marginalised position, relying as they were on volunteers who responded to advertisements in the local paper and Socialist Worker.

As well, all the members of the Ragged Collective are white. In the Q&A the directors stated there had been ethnic minority members come forward at the start, but they had been unable to stay with the project for its whole length. Ethnic minority voices aren’t excluded, with a black woman and young black man sharing their thoughts and experiences during the film and members of the cast speak of standing up to racism. It does mean the experience of living with and suffering racism was missing from the cast’s stories. This does not detract much though from what is on the whole a fantastic documentary.

The filmmakers have managed to compress into 82 minutes, lifetimes worth of experience and give a platform to working-class people long ignored by the system. This film should be shown on every council estate, community hall, school, college and university across Britain as a vital message to galvanise the working class to rediscover its history and reawaken its desire to change the capitalist system.

More information about the film can be found at: http://www.conditionoftheworkingclass.info/

Mike and Deirdre are  currently organising film showings around the country. If your Left Unity branch would like to organise a showing of the film, contact them at insidefilm@btinternet.com