Fact and fiction about the Referendum

Massive amounts of comment and analysis are emerging from the political Left and the left-of-centre commentariat. Some is sensible, some is full of half-truths and some is just fantasy. Let’s start with the fantasy wing of this debate. “A victory against austerity and neoliberalism” was the first response on the SWP website. That account is straight up wrong.

Even if you said that the vote was mainly the result of a revolt of working class people fed up with being completely ignored and super-exploited, the idea that this vote is a victory against neoliberalism just misses the political content. That political content is that Brexit won because of mass hostility to immigration. Much of that is racist or at least xenophobic.

In other words, millions of workers suffering from poverty and deepening inequality, living miserable lives with no way out, were during the campaign (and many a long time before) led to the utterly false conclusion that clamping down on immigrants would help them ‘take control’ and solve their problems. On the contrary: the advent of Gove and Johnson marks a political shift to the right that will lead to a redoubling of attacks on working people.

Working class people and poorer sections of the middle class are often led, especially in the era of constant media repetition of neoliberal lies, to support politicians who are directly opposed to their interests. They have done it with mass support of the Tea Party (led and organised by billionaires) and Donald Trump in the United States. The same is true of Marine Le Pen and the Front National in France, and many righting parties in Europe and elsewhere.

Confusion about this point is repeated by Socialist Party deputy general secretary Hannah Sell: “At the same time, it is completely false to suggest that the exit vote had – in the main – a right wing or racist character. Of course, some of those who voted for exit will have done so for racist or nationalist reasons, but the fundamental character of the exit vote was it was a working class revolt…in fact no working class movement is 100% pure, completely without reactionary elements or sub-currents. It is the job of socialists to see what is primary – in this case a largely working class electoral uprising against the establishment.”

The evasiveness of the term ‘working class uprising’ says it all. It evades the precise political character of the Brexit vote (which is surely ‘primary’) and hides behind its supposed sociological profile. It is a sign of chronic political misjudgement.

Beyond the far left in the left-liberal commentariat we find some significant insights mixed up with oversimplications about the class content and the political character of the votes for Remain and Brexit. John Harris in the Guardian quotes a women in Manchester as saying “If you’ve got money, you vote in, if you haven’t got money, you vote out.” John Harris himself doesn’t repeat this simplification, but obviously finds much of it to be true. Actually it’s way over-simplified.

First it’s worth remembering that more than 16 million people voted Remain, including huge numbers of working class people and two thirds of Labour supporters. Second all the major cities with the exception of Birmingham voted Remain. It’s just false that this is because of the mass of wealthy and petty bourgeois types who inhabit city centres. For example, nobody thought that the victory for Saddiq Khan in the London mayoral election was mainly because London was made up of a massively wealthy population, not at all. Neither was the inner city Remain vote in London.

On the contrary, solidly working class and multicultural inner-city areas in London returned huge majorities for Remain. But of course that is indeed one factor, often the key one: multicultural. As opposed to say areas like Sunderland, where there are very few immigrants, that voted 60% for Brexit.

The only working class areas in London that voted Brexit were Barking and Dagenham and Havering (although another Brexit borough, long-Tory Hillingdon, has a big working class population it is more mixed – current local MP, Boris Johnson). Both Barking and Havering are mainly white areas which have suffered economic decline and a section of the local working class that is impoverished. They both have a history of significant support for the far right.

But look at Haringey, with some very run down and impoverished areas like Edmonton and big parts of Tottenham: the result was 79% for Remain. Because Haringey is massively multi-ethnic and multicultural. Incidentally the image of the working class that emerges from some of the denigration of the inner cities is a bit bizarre. Many young workers today have university degrees and desk jobs (usually badly paid) and often live in inner cities. And mainly voted Remain. These are not ‘fat cats’ who have benefitted at the expense of the more traditional working class in northern and Midlands towns.

So a picture begins to emerge. Yes significant sections of the (especially white) working class, identified by commentators like John Harris and Adiyta Chakrabborti, did vote for Brexit. They tended to be indeed the poorest and most alienated. But (see below) there were other important cultural and political determinants of how people voted. First is age. There was a near perfect match of age and voting intentions, with 18-25 year olds massively in favour of Remain and over 65s in favour of Brexit. Older people are more likely to vote and that always benefits reactionary causes. And there is the perennial problem of many younger people being excluded from the electoral register because of their precarious housing situations.

Second the survey that came out yesterday found yesterday showed that people who tended to have left or progressive views voted Remain, while those with socially conservative or right wing views voted Leave. With the exception of ‘Globalisation’ and ‘Capitalism’ (50% of both Leave and Remain viewing capitalism negatively), every other significant category like Immigration, Feminism, the Green Movement and Multiculturalism was viewed negatively by Leave voters. Multiculturalism was viewed negatively by 71% of Leave voters. Maybe this survey was a small sample, but I doubt its results were very inaccurate. 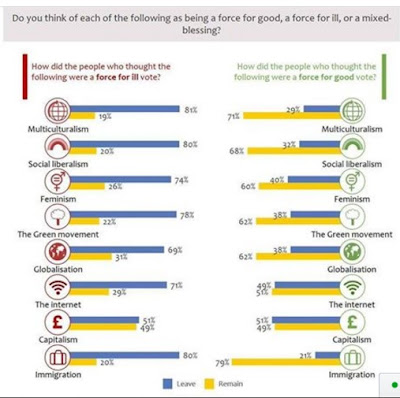 Third voting strongly conformed by region to where UKIP has a significant electoral base or where there is a right-wing tradition. However these bases have been extended in the past period, for example into South Wales. Industrial decline and the decline of the labour movement, sometimes combined with demographic decline as young people move out, has severely weakened both Labour and the left. Much of this is not at all new.

In an article in 2009 I pointed out: “If the success of UKIP is based on a long- term reactionary xenophobic campaign in the media, it has also been spurred by long-term political and social factors. First and foremost are the defeats of the labour movement at the hands of Thatcher and her successors. This has had major structural effects. The working class and the labour movement are not like they were in the 1970s. Trade union membership has declined, and major centres of working class strength – in the mines, engineering plants, car factories and beyond – have been dispersed. Neoliberalism has deepened class divisions, leading to centres of the newly affluent and the long-term poor.”

The weakeness of the analyses made by John Harris and Aditya Chakrobbati is that they play up the social and economic determinants of the Leave vote and downplay the political and ideological ones. It may be true, as John Harris says, that many of the Leave voters he met going round the country are not open racists, but that is missing the point. The point is that these people have been pulled behind a xenophobic, anti-immigrant, tide that is poisonous and irrational. It has been done in the middle of Europe-wide hysteria about the waves of immigrants heading to Europe from countries that the West has been responsible for collapsing through war, and in the middle of a tide of islamophobia. People may have good reasons to be fed up with the EU. But that is NOT the reason Brexit won. It won because of the immigration issue and the tide of lies told about it by right-wing politicians and press and broadcast media.

One certain thing however is that the Remain defeat was not the fault of Jeremy Corbyn. Jeremy may not have had a brilliant campaign, but it’s hard to make an impact when the media ignore you and focus just on two wings of the Tory party. The no confidence motion put forward in the PLP by Margaret Hodge and Ann Coffey was predictable. What was not predictable was the 140,000 people (at the time of writing) should immediately sign an online petition rejecting it. Attempts to get rid of Jeremy Corbyn are going to be bitterly contested.

Polly Toynbee predictably leapt to support the anti-Corbyn moves. But the Blairite anti-Corbyn camp faces an irresolvable contradiction it won’t face up to. The disconnect between Labour and big chunks of its former working class supporters doesn’t stem from having Jeremy Corbyn as leader, but as a result of having Tony Blair as prime minister, from the inevitability of Labour–supervised neoliberalism causing increased poverty and division. They want to go backwards, to have a warmed up Blair or a British Hilary Clinton. Their response to what has happened will be to demand that the Labour Party goes further rightward. Now the Left will of course have to unite around the mass campaigns and harsh struggles that will ensue under a Johnson Tory government. It also needs to begin a deeper strategic discussion about the string of left wing defeats beginning to accumulate internationally, about how to build for the long term in a period of reaction.

7 responses to “Fact and fiction about the Referendum”