Europe is stained by the ashes of Moria refugee camp 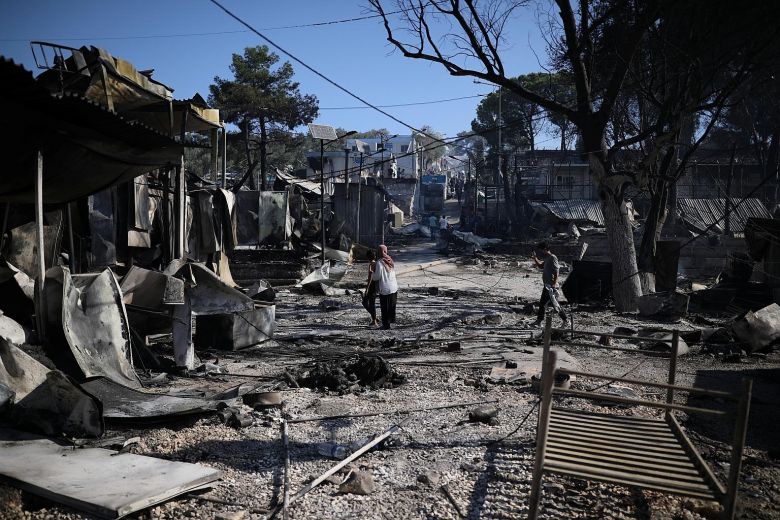 Guy Smallman writes: Yesterday morning we awoke to the news that Europe’s largest refugee camp burnt to the ground overnight. At present it is unclear if there have been any fatalities and it will be a while before we know for sure. Around 13,000 people (mainly from Afghanistan and Syria) were cramped into a former army facility at Moria built to house around 2,500. The cause of the fire remains unknown.

It was not the first fire. They were a regular occurrence with so many people trying to cook and keep warm in cramped and squalid conditions. The last fire in April killed a toddler. In March there was a fascist arson attack, which destroyed a school for refugee children nearby. The previous fire, caused by Greek riot cops firing teargas canisters into the camp, killed a mother and baby.

Recently the already desperate conditions have been exacerbated by the arrival of Coronavirus on the island. It has been used as an excuse by the authorities to blockade the inhabitants inside the perimeter. There is little doubt that social distancing would be almost impossible in such conditions. In March, when I last visited, young Afghans were downloading World Health Organisation guidelines for controlling the virus and translating them to several different languages to be distributed on flyers from the camp’s makeshift library. There was no evidence of any outside help with the looming epidemic and local NGO’s were already overwhelmed with regular diseases and ailments associated with such living conditions.

Right now at least 13,000 people are sleeping rough in the hills and fields around the smouldering remains of Moria. Many more are lining the road to Mytilini. Greek riot cops block their path to any realistic chance of shelter there. Peoples’ canvas homes, together with their few possessions, are destroyed in many cases. So are the few basic and inadequate medical facilities that were available to them. Their already miserable lives have just got a lot worse for the immediate future. Though some might now experience a bit of hope in the long term and the camp itself will not be missed.

While the cause of the fire remains unknown, the Greek PM Kyriakos Mitsotakis from the Conservative New Democracy Party has been quick to blame the refugees themselves. Claiming (without evidence) that they started the fire deliberately in protest to the COVID lockdown being imposed by the local authorities. The idea that people would deliberately risk the lives of their own families in a reckless stunt seems ridiculous. Not least because the majority of the residents are multigenerational Afghan and Syrian families ranging from babies to the very old.

However the absolute misery and desperation of those being held within its confines cannot be underestimated. My first visit to the place in 2015, during the height of the refugee crisis, saw similar conditions. Poor sanitation and access to safe water, with a totally inadequate shelter that left the residents at the mercy of the elements. But back then there was hope. Germany was accepting refugees and the camp was a temporary stop off on the way to a new life for people fleeing war and extreme poverty. The Greek authorities were overwhelmed but most people only waited a couple of weeks before getting the paperwork needed to continue their journey.

These days two weeks have become two years or more. As the Island of Lesvos has become a giant prison designed to enforce a border policy contrived way beyond the borders of Greece itself. The people have become trapped by bureaucracy in a hell hole that is increasingly ruled by criminal gangs and warring gangs of bored teenagers as the local people of Lesvos become increasingly exasperated at trapped refugees fast becoming a fifth of the Island’s population. The Island has a leftist tradition but that has been tested to the limit as the local people feel that they are being singled out for an impossible task of someone else’s making.

Back in 2003 the European Union (EU) imposed the Dublin 2 agreement on its member states. Simply put it meant that refugees had to claim asylum in the first EU country they set foot in. This meant that certain states would shoulder the lion’s share of the burden due to their geographical location. Namely Greece, Spain and Italy. Five years later the global financial crash meant that the states most crippled by the crisis and the austerity imposed by the EU would have the most refugees when they could least afford to look after them.

Greece has no choice but to comply. It is tied into the neoliberal economic model of the EU for the foreseeable future. So the Greek government has turned Lesvos into a prison to keep the refugees off the mainland. Not that they ever wanted to be in Greece to begin with. Countries like Germany, Sweden and the UK where people see a real hope of building a new life, often in the company of their own relatives, are protected by a border policy designed to stop refugees travelling to safety in violation of international law.

A border policy that forces families into overcrowded dinghies to make a perilous journey to Lesvos, instead of a safe crossing via the Greek-Turkish land border. That route was closed a while ago after the EU spent around a billion euros of member state’s money building one of the worlds most impregnable razor wire fences along the Evros River.

This policy has been a gift to the far right of certain states while imposing untold misery on the most vulnerable people on the planet. Very often fleeing wars sponsored by the very countries enjoying the most protection against having to deal with the human consequences.

Exactly how the Greek government will respond to the sudden homelessness of 13,000 people remains to be seen. For many of the former camp residents it could be an opportunity to continue their journey into mainland Europe. Already one German state has offered to accept 1,000 of them. Hopefully more will step up. Germany took a huge gamble in 2015 offering refuge to a million refugees. That act is already boosting the country’s economy.

But whatever happens next, EU border policy will continue to murder more people of colour along its borders each week than every European racist and far-right group manage each year.

This report was originally published by Freedom and is reproduced with the permission of the author.