Rachel Godfrey Wood reports from a meeting that heard speakers from Podemos and Syriza. 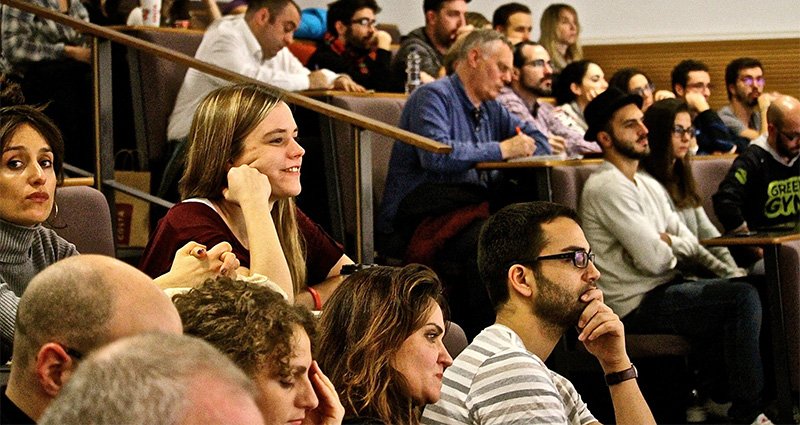 Around two hundred people met in UCL to listen to four speeches on ‘Empowering the Voiceless Majority’ and prospects for progressive change in Europe. The four speakers were:

Pablo Echenique, MEP for Podemos.
Marina Prentoulis, professor of media and politics at the University of East Anglia and representative of Syriza
Salma Yaqoob of the Birmingham Stop the War Coalition and spokesperson for the Birmingham Central Mosque
Emmanuele Ferragina, lecturer of comparative social policy at Oxford University and author of the book ‘The Invisible Majority’

Marina Prentoulis discussed the rise of Syriza in Greece, whose popularity has grown so much in recent years that it has strong prospects for winning the next elections on an anti-austerity platform. She began by discussing some of the problems facing Europe’s citizens, in particular the fact that the majority of people have been encouraged to become passive consumers of politics rather than active participants. This creates a challenge for the continent’s progressive parties and movements in facilitating grass-roots activism and democracy.

In Greece, the economic and social catastrophe generated by austerity policies, which pushed millions of people into hardship and despair, led to major solidarity initiatives in neighbourhoods with groups of people organizing to provide basic food and healthcare services no longer provided by the state. Although these initiatives were not directly linked to Syriza, they serve as a potential foundation for further activism and social change in the country. Syriza, meanwhile, has submitted its economic proposals to an unprecedented level of participation among local assemblies, as well as guaranteeing that its MPs contribute 20% of their salary to solidarity initiatives. Through this, they have built up strong links that will be crucial in the future.

Emmanuele Ferragina discussed the political implications of the growing numbers of people in Europe living in Europe in marginalised conditions, either because they are unemployed, or lack the documents to work legally (in the case of many migrants), or are forced to work on irregular contracts. Emmanuele highlighted the failure of Europe’s ‘social democratic’ parties to reach out to these groups, who have been voting less and less and therefore find themselves increasingly less powerful.

The challenge for the left, he emphasised, is to demonstrate that these different groups share common interests which are distinct from and opposed to those of the elites and upper-middle classes. He also discussed the negative impacts of Europe’s monetary union, which deprives Mediterranean countries of key policy mechanisms, thereby forcing them to remain competitive by reducing the cost of labour, to the detriment of the majority of their populations. In order to change this, Emmanuele advocated Europe-wide policy initiatives, which might include for example a continent-wide minimum income guarantee, as well as revisiting aspects of some countries’ welfare states to make them more redistributive.

Salma Yaqoob shared her thoughts on the dominance of neoliberalism and the challenges of building popular organisations of the left. She began her talk by emphasising the primary success of neoliberalism: depriving people of hope and the belief that they can build a better society. A key part of this involves the framing of ‘the economy’ in quasi-religious terms so that citizens feel disempowered and that they cannot challenge the way in which economic affairs are conducted. In addition, the media and mainstream politicians often deliberately slice up different categories of the poor and encourage them to blame each other for their problems. Unfortunately, this can be effective, leading to hostility against migrants, for example. Finally, neoliberalism offers highly restricted choices, for example between ‘hard austerity’ and ‘austerity lite’ in an attempt to convince voters that they do have choice in public affairs.

The left, meanwhile, suffers from a failure to reach out to the poorest groups in society, and a preference for hard dogmas and old fashioned rhetoric which is off-putting for the majority of the population. However, Yaqoob highlighted the inspirational examples set by Syriza in Greece and Podemos in Spain as proving that it is possible to rally large numbers of people behind a progressive, anti-austerity agenda. 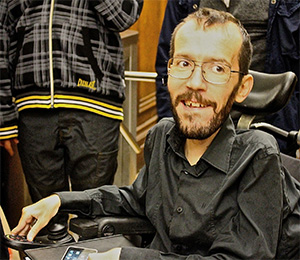 Finally, Pablo Echenique of the Podemos party, which has seen an unprecedented growth in support since its founding at the beginning of the year, spoke about some of the key means by which elites maintain an unjust and immoral status quo. In particular, he commented on the hypocrisy of discourses about ‘free trade’, which hide the ways in which the rich gain and maintain their wealth through their political connections to the state, leading to skyrocketing corruption in countries such as Spain.
Simply by cutting back on corruption, Pablo argued, Podemos could easily finance a major expansion in social services if and when it gets into power. Not only that, the entire political system is undemocratic and actively denies citizens of the chance to debate the most important issues. Nowhere is this clearer than in Brussels, where key meetings between politicians and lobbies take place behind closed doors and without any accountability whatsoever. Much depends, Pablo argued, on the middle classes. Right wing governments often maintain themselves in power by ‘giving just enough to just enough people’, and placating middle class sectors who are then unwilling to fight for a better society. One of the challenges for the left, therefore, is simply getting these groups to feel empathy with the poor, something which sounds simple but can require a complex psychological process.

Pablo finished by discussing the surge in support for Podemos, which he explained as a combination of the outrage and idealism of the Indignados movement, combined with the pragmatism and willingness to take power which Podemos has brought to the table. While Spanish elites felt they could survive the mass protests that engulfed the country in 2011, Podemos has ambitiously set out to gain an influence in the media, and ultimately aspires to taking over the institutions of the state to bring about progressive change. Although no one knows what will happen in the future, Pablo was assured us of one thing: once a population has begun to see exactly how power works, there is no way back to how things were before.

These four insightful and inspiring speeches prompted a vibrant discussion afterwards. Kate Hudson, national secretary of Left Unity, applauded the growing strength of the Greek and Spanish lefts, and stated Left Unity’s commitment to providing solidarity for Syriza and Podemos in order to build a fairer Europe together.