Comments on the 10 Point Pledge for Labour leadership candidates 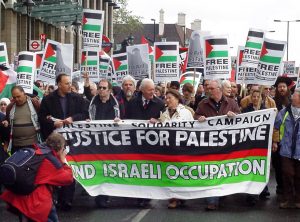 David Landau writes: It is a shame that all five candidates to be leader of the Labour Party have pledged to support the 10 points on anti-Semitism that the Board of Deputies of British Jews (BoD) asked each of them. Far from clearing this issue up it threatens to be a millstone around their necks in the future. Below is a brief critique.

First an issue regarding ALL the points, even those we might agree with. The BoD is not making any demands of this kind to the other political parties. They are not making these demands with regard to all forms of racism and in defence of all religions, although at certain points racism is referred to more generally. This seems to me a case of discrimination.

Turning to some of the points in more detail.

1. Resolve Outstanding Cases. All outstanding and future cases should be brought to a swift conclusion under a fixed time-table.

This looks reasonable but it is important that there is NO PRESSURE to cut corners and to either take action against people or exonerate people without a thorough investigation.

Most organisations have an internal disciplinary procedure allowing for independent external examination if that procedure is exhausted. If the Labour Party is to change its procedure it is a matter for the membership at conferences rather than something candidates can agree to without reference to the membership. If other parties don’t have an independent procedure then the BoD should make this demand them also.

3. Ensure transparency. Key affected parties to complaints including Jewish representative bodies, should be given the right to regular detailed updates on the understanding of confidentiality.

Who are these Jewish representative bodies? The BoD and the Jewish Labour Movement do not speak for me. And what about other parties and other faiths?

Shouldn’t this depend upon the seriousness of the offence as well as the prominence of the offenders? What if they appeal the decision to expel and win the appeal?

5. Provide no platform for bigotry

I agree but it goes on ‘Any MPs, Peers, members of CLPs who support campaigns or provide a platform for people who have been suspended or expelled in the wake of anti-Semitic incidents should themselves be suspended from membership.’

This might be OK but if and only if it applies to all kinds of racism, homophobia, anti-disability, and misogyny. A caveat needs to be made regarding pending appeals.

The further danger is that any meeting regarding Palestine could be barred by this if taken in conjunction with the next point.

This is where it goes seriously bad and dangerous. The crucial thing about this definition is that some of the examples given compound anti-Semitism with anti-Zionism; severe criticism of the state of Israel. By signing up to this, all the Labour leadership candidates have left all those in the Labour Party who champion Palestinian rights in a vulnerable position. And if we combine this with point 3 above, a ‘representative’ Jewish organisation could interfere or veto the development of Labour Party (and potentially Labour Government) policy on Palestinian rights, the occupation, Israel’s policy etc. In particular the Boycott, Divestment and Sanctions Movement would be forbidden – something which lies behind this campaign of vilification in the first place. The IHRA definition explicitly forbids comparisons between the actions of the State of Israel and the Nazis. I would agree that this is unwise but when Israeli policy declarations are made which parallel things said by Hitler should we be forbidden to point this out? The Israeli Nation-State Law is a case in point.

7. Deliver an anti-racism education programme that has the buy in of the Jewish community. The Jewish Labour Movement should be re-engaged by the party to lead on training on Anti-Semitism

The Jewish Labour Movement is an avowedly Zionist organisation. It firmly believes in compounding anti-Semitism and anti-Zionism. It sees anti-Zionism as a kind of anti-Semitism. In our view and the view of Jewish organisations such as the Jewish Socialists’ Group and Jewish Voice for Labour this makes the JLM unfit to lead on education in these matters.

This is outrageous. We are not fringe organisations and the BoD and the Jewish Labour Movement do not represent the Jewish Community. The BoD may have a far greater number of members, but in many situations and issues the community are more on our wavelength. Going right back to the Battle of Cable Street, when the BoD instructed the community not to take part but thousands upon thousands of Jews followed those who were the Jewish Socialists of their day and stopped Mosley’s fascist and anti-Semitic black shirts from marching through the East End of London. We are not a fringe!

9. Communicate with resolve. Bland, generic statements should give way to condemnations of specific harmful behaviours and where appropriate, condemnation of specific individuals.

This should apply to all parties and organisations in respect to any racist behaviour. The difficulty with this in the context of all the other demands by the BoD is the decision as to whether the behaviour is anti-Semitic in the first place depends on the international definition, so that progressive anti-racist anti-imperialist speech and behaviour may be seen as anti-Semitic and a matter for condemnation.

This ‘anti-Semitism’ crisis has been very much created by the BoD, the Chief Rabbi and the Jewish Labour Movement. There are a lot more people thinking and saying that ‘the Jews’ have a huge undue influence on politics as a result of their interventions on this question than there were before.

We shall fight anti-Semitism, racism and fascism wherever we find them. We are not expecting much help from the BoD.

They Shall Not Pass!

24 January 2020
To submit an article for the 'Discussion & Debate' section of our website please email it to info@leftunity.org