Brazil’s ‘car wash’ investigation in the mud: a dirty war against the left 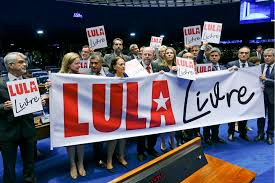 As the Brazilian right-wing is imposing on the South American country a grave regression, The Intercept has revealed that their tool to take back power through the local justice system, especially arresting Lula da Silva, is as disgusting as Bolsonaro’s nation in these times. “I simply can’t believe what is happening in Brazil,” says Noam Chomsky exclusively to author Edu Montesanti.

Operation Lava Jato: since 2014 trumpeted by the mainstream media, nationally and internationally, as cleansing Brazil of corruption, has become another example of the great service to the truth and democracy by the alternative media. Since the beginning, it has denounced the culture of corruption — facing wrath and every kind of aggressions — the outrageous disservice of the “heroes” of the criminal task force, clandestine right-wing ideologues masquerading as apolitical law enforcers, perpetrators of a self-evident lawfare.

The Intercept’s Glenn Greenwald has revealed, or confirmed taking into account alternative media’s exhaustive denouncements through the last five years. He has recorded the serious wrongdoing, unethical behavior and systematic deceit by Lava Jato investigation’s prosecutors led by the chief prosecutor Deltan Dallagnol.

Lula da Silva was sentenced by Moro to 12 years in prison for corruption and money laundering, in July 2017. According to the judge, he was convicted of benefiting from renovations to a beachfront apartment, both paid by the building company OAS as payback for some contracts he helped the company get. The accusation was based on a report published by O Globo’s paper, which brought contradictions in the same publication years ago.

It is worth remembering that Lula’s exclusion from the election, based on Moro’s finding of guilt as Dallagnol confided to the judge his increasing doubts over two key elements of the prosecution’s case, was a key episode that paved the way for Bolsonaro’s victory. As soon as this retired military officer took over the Presidency, he nominated Moro as his “super-minister” of Justice and Public Security.

The well-known mucky Brazilian “Justice” system has been mostly composed of the same elitist white families through the years. It is deeply corrupted, a solid caste secretly trained by the Washington regime, as revealed years ago by WikiLeaks (Moro included in such legal courses, based on United States law). The main objective through Lava Jato has been:

The investigation called Lava Jato which, in alliance with the mainstream media — especially Rede Globo with a vast history of promoting coups in the South American country — has taken the form of a totalitarian regime in Brazil. It has had a strong and clear political character which relinquishes national sovereignty in favor of the interests of the United States, as well as the 1964 CIA-funded military coup.