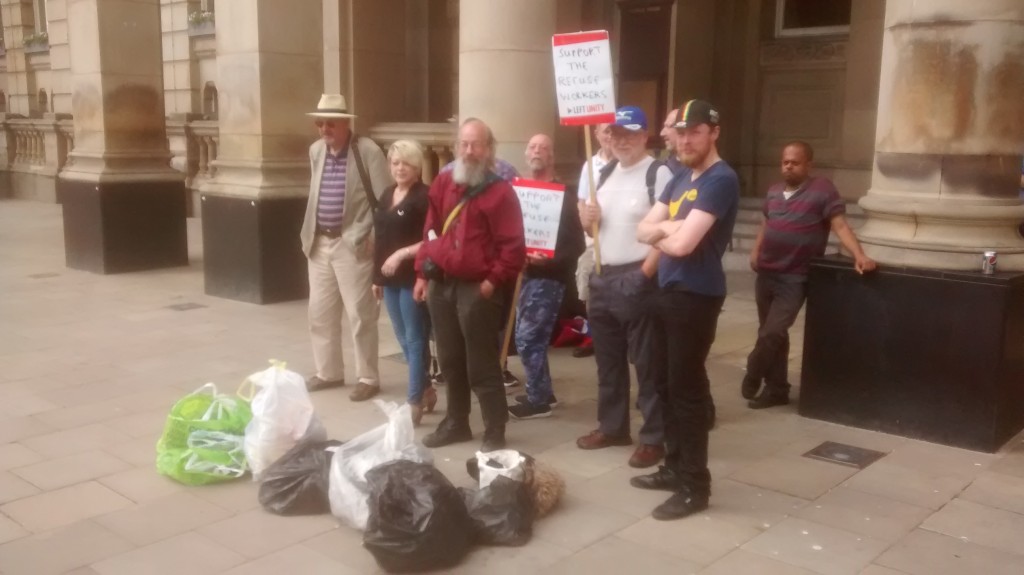 Today Birmingham Left Unity took bags of rubbish and deposited them in front of the Council House, in protest at the Labour Council’s attacks on the wages and conditions of its refuse workers, and in support of the UNITE workers who are striking and working to rule in protest.

The Council wants to downgrade the supervisors, who look out at the rear of the trucks for safety issues, to loaders. It also wants to change the working week to five days at 7.5 hours, instead of four days at nine hours. This will cut out overtime and result in workers losing £3,000 to £5,000 per year. It is also shifting 122 agency workers off the trucks to work elsewhere, leaving just three workers per truck to instead of five as it used to be before the bins came in.

So, it’s the same old story; work harder for less pay. However, the UNITE workers have put their foot down and following a ballot of 90% in favour have commenced industrial action, and given that several weeks of action and 57 hours of negotiation have not yet produced a climb-down by the council, they have said that the strike will be escalated from two hours a day to three. This will continue, along with the work to rule, into September.

The Council has responded to the growing piles of rubbish around Birmingham by hiring “partners”, or agency staff, in a scabbing operation in order to pick up the rubbish. Not much sign of an anti-austerity mood in the Labour-dominated Council House then.

So, it is important that the workers are shown full solidarity by others. We have done our little bit – pointing out that it is the Council to blame and not the refuse workers, but a lot more may be needed to dent the hard-nosed attitude of the local Council.