Against nationalism, corruption, privatisation and war 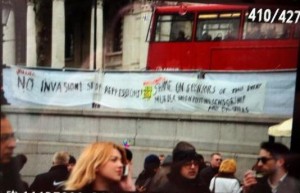 Members of the Russian community in London protesting against war

The continuing political and economic crisis in Ukraine is taking a dangerous military turn.

Left Unity takes the position that there can only be a political solution to this crisis and that neither foreign military intervention nor foreign political and economic intervention provide the answers to Ukraine’s complex problems.

Whether under the flag of US, NATO, Russia or the European Union, military intervention only ever makes the situation many times worse. So it is in Ukraine. The West’s hypocrisy in condemning Russia for breaking international law is breathtaking: nevertheless, Russian troops hold no solution to the crisis.

As Ukraine experiences a deep economic crisis, it also has to be clear that neo-liberal economic policies – with the swingeing privatisation and austerity that will accompany them – will only exacerbate tensions and conflicts within the country, which will find a nationalist expression rather than confronting the real problems facing all Ukrainian citizens.

For decades, internationally, neo-liberal economic policies have contributed to inter-community conflict and social division and Ukraine will be no exception. The Ukrainian people had some success fighting privatisation in the 1990s and this can happen again. Economic policies which will meet the needs of all communities within Ukraine must be supported as a matter of urgency.

The only beneficiaries of neo-liberal policies will be capitalist interests outside of Ukraine and far right and fascist forces which are resurgent within Ukraine. Already these reactionary movements have used the crisis to increase their political weight even at a governmental level.

Political corruption has been rife at the top of political life in Ukraine, rightly provoking an outpouring of popular revulsion but this cannot be used as the justification for attacks and scape-goating of any community. There are oligarchs in all parts of the political elite controlling the overwhelming majority of the country’s wealth.

The demands of the Ukrainian people for transparency and democracy in Ukrainian political life must be respected and implemented. All peoples of Ukraine must have their full human rights guaranteed including freedom of expression and the right to demonstrate together with equality of citizenship and language rights and respect for the autonomy of communities under the constitution. There can be no second class citizens in any country.

13 responses to “Against nationalism, corruption, privatisation and war”