A Revolution Betrayed? scenes from a velvet anniversary 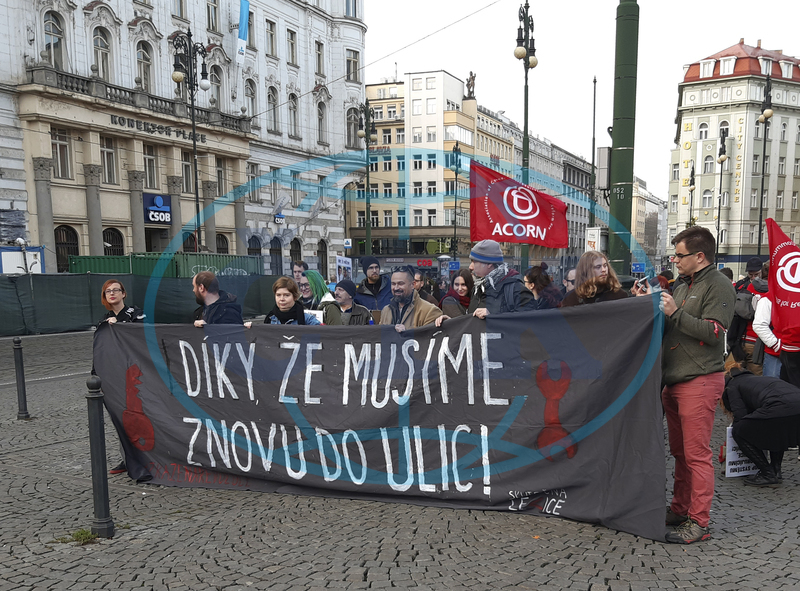 In the Prague spring of 2019 we experienced some of the largest demonstrations that the Czech Republic has seen since the Velvet Revolution of 1989, writes Diana Young. One after another, the historic public spaces of the city were somehow crowded out as the demonstrations moved from the Old Town Square, to Wenceslas Square until a vast demonstration of 300,000 took place on the Letna plain in June of this year.

The Czech Republic is not known for its street demonstrations or mass mobilisations and so the question to ask is what is it that motivates people in such enormous numbers to take to the streets? The main villain of the piece is Andrej Babis, the current Prime Minister who, at the head of his ANO party has been in power since winning the general election in 2017. Babis – originally from Slovakia – has come to epitomise the personally corrupt class of politicians with a communist past.

This Saturday (the 18th of November) around 200,000 took to the Letna plain once again calling on Babis to resign over credible allegations of fraud where he has used EU subsidies for his private business, the Agrofert conglomerate. The demonstration, entitled the Million Moments of Democracy attracted individuals who came by bus and train from across the country. At the same time Socialisticka Solidarita/Skutecna Levice fashioned an ‘anti-captalist bloc’ within the greater demonstration. However, the politics of this movement seem entirely personal whereby the removal or resignation of Babis will be the end point. Beyond the SocSol/SkLev intervention this top-down mobilisation has all the politics of a rearrangement of the furniture in the Premier’s office.

The mass demonstration was timed to maximum effect to take place the day before the nation marks Struggle for Freedom and Democracy Day. On the 17th of November 1989 a student march – an annual event to commemorate the execution of a number of Czech students by the Nazis in 1939 – was halted by security forces who used the most heavy handed and violent response which, in turn, led to rumours of the death of a student. This led to the swift collapse of the regime and within days the philosopher king, Vaclav Havel was in negotiations to form a government.

In the 1990s there was no national holiday on the 17th of November although universities still marked International Student Day. Struggle for Freedom and Democracy Day, introduced into the calendar in 2000, is an interesting example of an Invented Tradition. The conservative governments of the new republic sought to anathematise the communist past as much as their predecessors celebrated the victory over fascism. There was no significant purge of party members as there had been in some other post-communist countries and so the invented tradition of November the 17th conveniently papers over a number of ethical cracks in the edifice.

A series of demonstrations and celebrations took place across the country. In Prague SocSol/SkLev took to the streets under the slogan Zrazene Revoluce (the Betrayed Revolution) and drew attention once again to the corruption at the top but going beyond Babis to include the Klaus governments of the 1990s which, like his idol Thatcher, sold off the nation’s assets for a pittance. However, Zrazene Revoluce also drew attention to the environmental damage which has been wrought over the past thirty years. The hopes of millions have indeed been betrayed.

Thus, this conjuncture in Czech politics shows an opportunity for the left. The anger against Babis could be reconfigured to bring about fundamental change. Hundreds of thousands have been mobilised and there remains the possibility that the question can move from the person of Babis to the whole corrupt, destructive, neo-liberal capitalism he represents.

21 November 2019
To submit an article for the 'Discussion & Debate' section of our website please email it to info@leftunity.org