A mass movement to defend democracy is born #stopthecoup 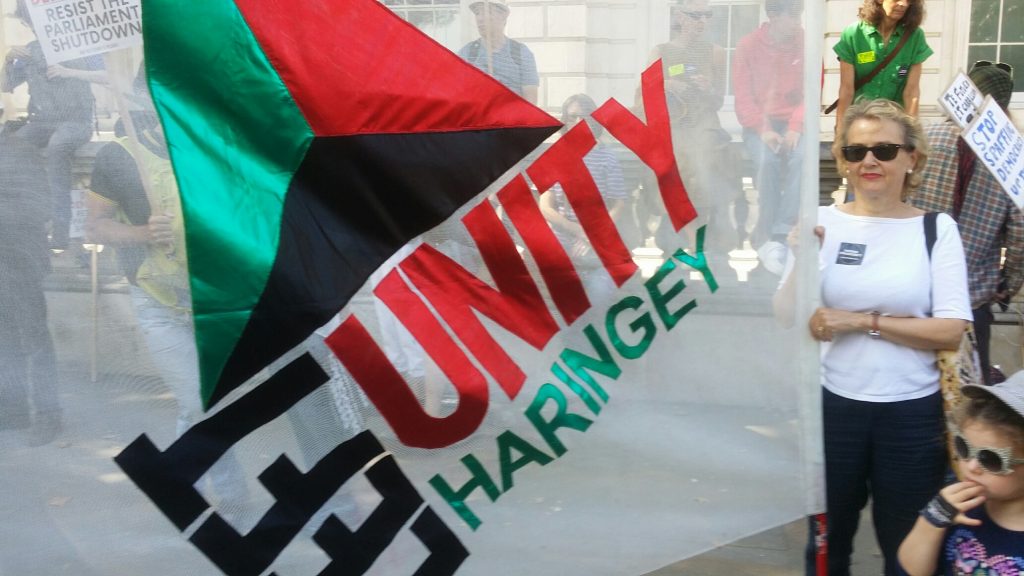 On the last day of August a new mass movement was born. Hundreds of thousands of people took to the streets of cities, towns and villages across the UK to protest Boris Johnson’s decision to prorogue parliament – effectively closing down democracy in this country as his illegitimate government drives towards a no deal Brexit on the 31st October.  Should he succeed it will be the basis for a further series of attacks on the democratic process. This is what John McDonnell correctly calls ‘a very British coup’ wrapped up in the plummy voices of the ruling class. Here we present two short reports from Left Unity members who were on the central London protest.

I really enjoyed the demonstration in London. I did not find the other LU comrades but I guess that’s a good thing reflecting how many people there were. I found that there was far less EU worshipping in the speeches or the banners and placards than at previous demos. I imagine that was because there was a far greater proportion of people for whom Europe was not the main reason they were there, and because this was led by Another Europe is Possible. The two themes that were strong throughout were defending parliamentary democracy – Stop the Coup – and solidarity with migrants.

On the second point I was amazed that chanting the slogan “No Borders, No Nations, Stop Deportations”, was led by one of the speakers (who was she?) from the platform – taken up by the whole crowd. This is the first time that has happened on a big demo that I am aware of, even the demos specifically about immigration. On the subject of immigration slogans again people were chanting “Say it loud, say it clear, IMMIGRANTS are welcome here” instead of the usual Refugees are welcome here. I have been encouraging that for years but this was the norm on this demo – broader than refugees. I imagine this is because in the main, EU citizens and the Windrush cases have not been about refugees. But good to see this evolution. 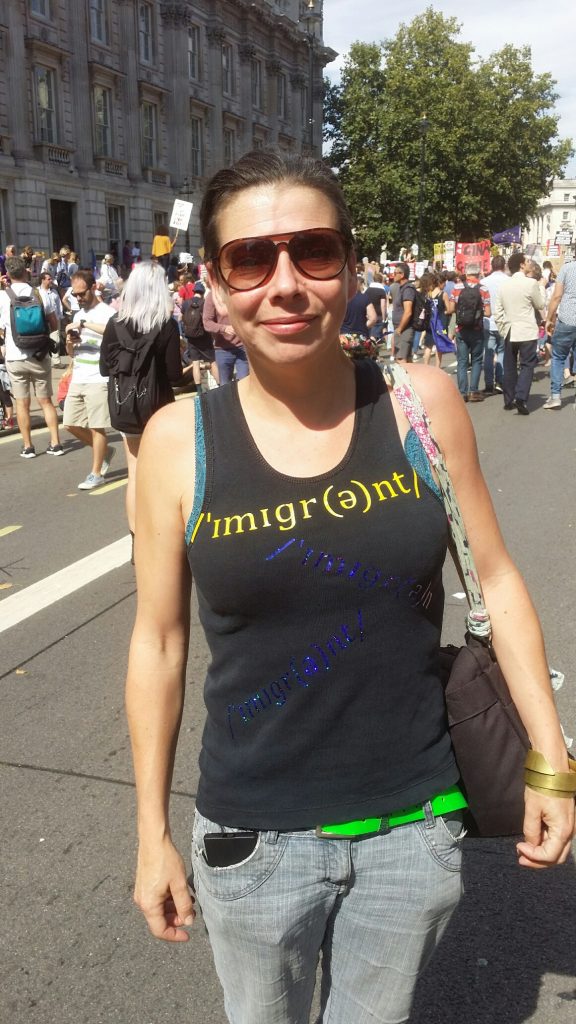 I got a lot of likes for my No Borders t-shirt.

Most of the speakers I had never heard before. So not same old same old….and there were many cracking speeches. Listening to them in high heat was not a chore this time. Including a woman whose mother had escaped from Franco’s Spain and the dangers she could see.

A very militant feel summed up in the chant of “If you close down our Parliament, we’ll close down the streets.” And that’s what we did. First Trafalgar Square.Then a group of us marched off to Piccadilly, blocking that too, but leaving enough people to freeze the traffic at Trafalgar Sqaure, so blocking these two intersections at the same time. Police completely hands-off!! Then a march off down the Mall to Buckingham Palace at which point the police got more interested and read section whatever it is, saying that if we don’t leave we would be liable to arrest. As far as I could tell we all dispersed and no arrests. [Note – a number of people were arrested and Another Europe mounted pickets at the police stations where they were being held] 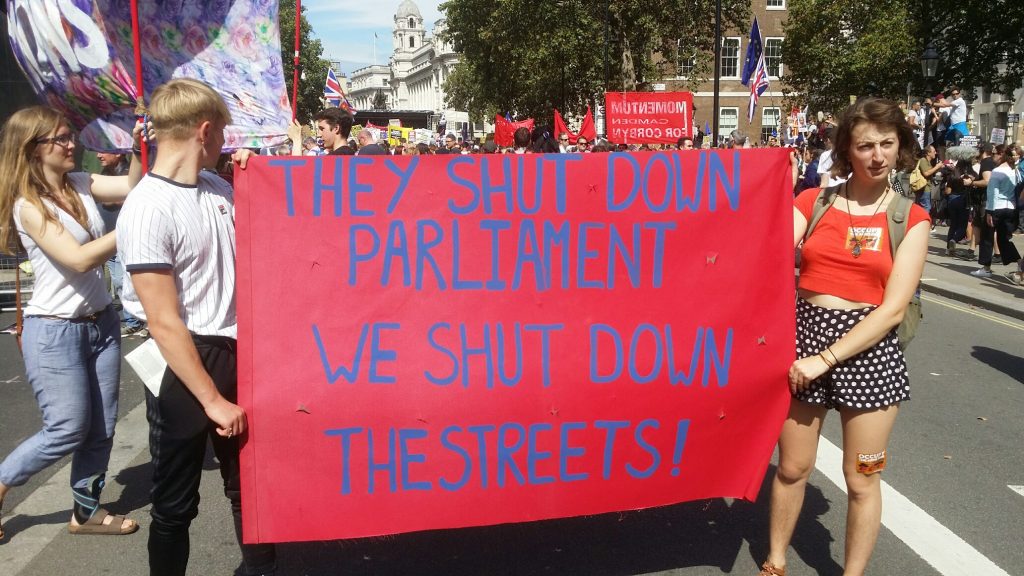 On the negative side a group near me heckled Diane Abbott and were singing ‘Where’s Jeremy Cobyn’ [Jeremy was speaking at the anti-coup demo in Glasgow]. I missed John McDonnell’s speech so I don’t know if they did it to him. A small clutch of fascists were surrounded by police all afternoon.

I felt a little strange surrounded by placards (home-made usually) talking about defending Parliamentary Democracy. I cut my political teeth talking about the limits of Parliamentary Democracy and in particularly the critique to the Communist Party’s policy of a Parliamentary Road to Socialism (in their manifesto The British Road to Socialism). It is absolutely right that we defend institutions of bourgeois democracy from a reactionary coup and we need to remember that many workers’ rights are under threat from such a coup – it’s not all simply bourgeois democratic structures. Is it our political task to gently point out the limits and that there is a greater kind of democracy to be had. A couple of speakers from the platform talked about ‘defending and extending democracy’. Maybe that is the way take that argument forward.

and this from Andrew Burgin

The central London Stop the Coup protest was several tens of thousands strong and very young. There was a carnival atmosphere. As on Wednesday these were young people prepared to act and surrounding roads and bridges were blocked and marches took place to Buckingham Palace and elsewhere. In that sense it differed in character from the People’s Vote protests. And it differed also in that it was the left which gave shape to and helped organise the protests – although this was largely a spontaneous outpouring of opposition to this government. Jeremy spoke at the Glasgow protest and John and Diane in London. I didn’t see any trade union banners and in London as far as know only the UCU gen sec spoke. The central slogan was ‘Stop the Coup’ and on twitter ‘Stop the Brexit Coup’ is/was trending. 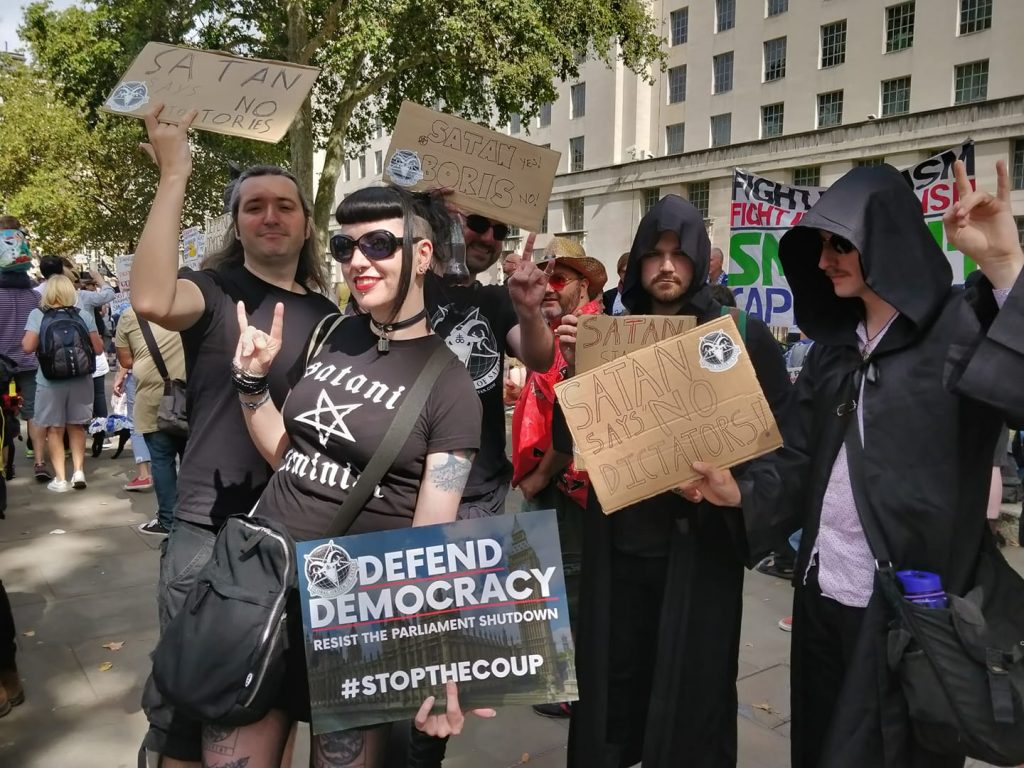 Satanists against the coup 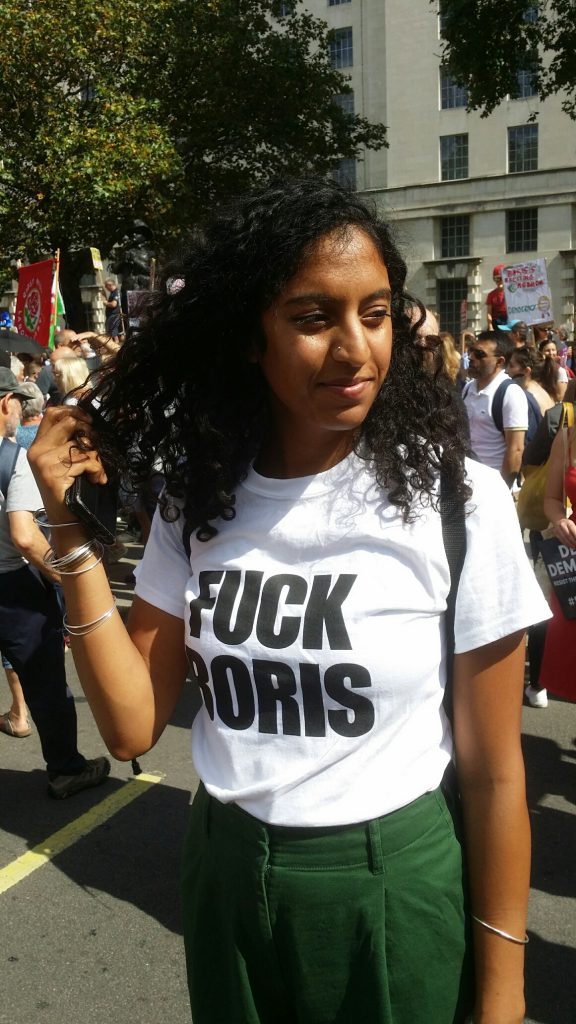 From a brief 5 minute look at social media I see that there were protests today in Manchester, Leeds, Oxford, Shrewsbury, Sheffield, Nottingham, Belfast, Brighton, Edinburgh, Southampton, York, Litchfield, St Albans, Bristol, Falmouth, Broadstairs, Newcastle, Liverpool, Stroud, Eton!, Exeter, Cheltenham, Durham, Cardiff, Truro, Winchester, Coventry, Weston Super Mare, Redditch, Gloucester, Worthing, Leicester, Plymouth, Norwich, Swansea, Darlington, Taunton, Hereford, Haverford West, Chester, Lerwick, Ludlow, Kirkwall, Inverness, Aberdeen, Dundee and many others. The basis exists therefore for the most massive demonstration outside the UK parliament and it should be called by the Labour Party and the TUC. Johnson and Cummings are preparing for the general election and are using every aspect of the state to that end. The election will probably be called in the next few weeks and certainly before the year is out and we must prepare too. All credit to Another Europe for the work that they have done today – it is a relatively small campaigning organisation and could have been overwhelmed by today’s events. Now is the time for the labour and trade union movement to step forward and this must happen quickly. Mass movements can disappear as just as fast as they appear. Protests took place in support throughout Europe today. The photo below is of one of the samllest – three people in Malaga who protested outsdie the British consulate there.