A CASE FOR THE REPUBLICAN SOCIALIST PLATFORM 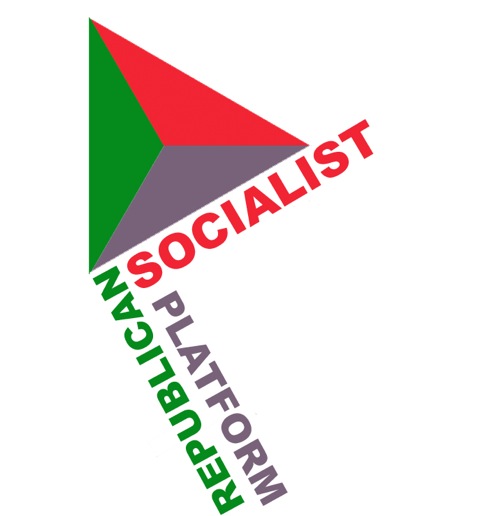 “British politics urgently needs a new force – a movement on the Left to counter capitalism’s crisis. If a new, networked movement of the Left could agree on some key principles, and avoid creating another battleground for ultra-left sects, it could give a voice to million … a movement uniting all those desperate for a coherent alternative to the tragedy of austerity, inflicted on this country without any proper mandate”. (Owen Jones ‘Independent’ Sunday 20 January 2013)

Austerity, Democracy and the Social Republic

The tragedy of austerity flowed from the global financial and economic crisis of capitalism, the policies of the Tory Coalition and the employers’ offensive against working people. The policy of combining inflation and austerity shifted the burden of the crisis from the rich to the working class and the unemployed. The government has continued Labour’s neo-liberal policies of privatization and deregulation and applied them to the NHS and welfare provisions. The working class movement remains on the defensive as the government seeks new ways to limit workers rights and attack the unemployed and welfare claimants

A proper mandate is a democratic question. The programme of the Coalition was never put before the electorate. It was a very British ‘coup’, cobbled together after the 2010 general election. But this is no minor issue. The reactionary policy of a ‘top down’ reorganization of the NHS was overwhelmingly rejected by the people before the election. The lack of a proper mandate was not exceptional but part of a pattern of unaccountable behaviour which includes the denial of civil rights to miners and their communities in 1984, the abolition of the GLC, the anti-union laws, the imposition of the poll tax, the treatment of the Hillsborough victims and the wars in Afghanistan and Iraq etc.

The United Kingdom is not a democracy. The Crown is a liberal oligarchy whose rule is legitimized by parliament and supported by a powerful democratic ideology. People may not like or believe in austerity but if the majority thinks it is ‘democratic’ they will tend to accept it as legitimate. The left has tended to turn a blind eye to the importance of this. Some of the left do so because they want to play the same parliamentary game. In a political system in which power is concentrated in the institutions of the Crown, violations of democracy and civil rights are the norm not the exception.

From 1942-48 following the publication of the Beveridge Report the UK adopted a policy of what can best be described as ‘social monarchy’ – as the British constitutional monarchy became a ‘welfare state’. Again this policy was implemented from above by the Crown. It was a response to growing pressure from the working class, expressed in the 1945 general election, and in the face of instability and the danger of revolution across Europe as a result of the defeat of fascism. The ‘social monarchy’, now associated in the minds of the post war generation with the NHS and the reign of Elizabeth II, remains popular. But it has been virtually destroyed by Thatcher and Blair, by neo-liberal globalization and the policies of Washington and Brussels.

There will be no return to a ‘social monarchy’ as ‘One Nation Labour’ seems to suggest. There must be a coherent alternative. A modern democratic welfare state will not come from the Crown but ‘from below’ by the democratic mobilization and organization of the people and the establishment of a ‘social republic’. The ‘Commonwealth of England’ is the historic link to the first and failed attempt at a social republic during the English revolution of 1647-49. Today this recognises the new political realities of the national question. The republican left in England has no interest and should have no intention of imposing a social republic on Northern Ireland, Scotland and Wales. National self determination and the spirit of ‘internationalism from below’ must stand for an ever closer voluntary union of the people of these countries.

Three great democratic movements have shaped the UK’s parliamentary democracy. The first came out of the democratic revolution and the struggle of the Levellers between 1647 and 1649. It culminated in 1649 with the declaration of the republic and the abolition of the monarchy and the House of Lords. Two hundred years later the Chartist movement fought for the right of working people to have the vote and be represented in parliament. This struggle was continued in the early twentieth century by the Suffragettes.

Chartism was the first mass working class movement. It put the struggle for democracy at the heart of working class politics. The six point People’s Charter was moderate in its demands. But constitutional change was seen as a threat to those in power. Opening up parliament to the working people would change the nature of politics and enable the working class to demand and win social reforms. For the ruling class Chartism conjured up the spectre of French republicanism.

Chartist movement had two wings – reformist and revolutionary. Although they stood candidates for parliament on forty occasions, it was, in the main, an extra parliamentary movement for constitutional change which organised petitions, strikes and demonstrations. In Newport in 1839 the Chartists attempted an insurrection. Chartism had a broad appeal partly because it did not require supporters to commit to particular tactics as expressed in the terms of non-violent versus armed struggle, legal or illegal activities and parliamentary versus extra-parliamentary action.

The Levellers, Chartists and Suffragettes did not finish or complete the struggle for democracy. The present economic crisis highlights the magnitude of the failure of democracy. The overwhelming concentration of power in the hands of the Crown has enabled support and protection to be guaranteed to the City and the major corporations. Parliament as currently constituted proved unable to represent and defend the interests of the people. In the 21st century the left must produce its own Great Reform movement, one which can forcefully make the case for democracy, not only in politics and law but in the workplace and local communities.

In the UK post-war republicanism grew out of the Northern Ireland civil rights movement. In the 1980s the Hunger Strikes transformed republicanism into a mass movement led by Sinn Fein based in the nationalist working class communities of Belfast and Derry. Subsequently Sinn Fein was incorporated into the constitution through the Irish Peace Process. The anti-poll tax movement provided the seeds for a new republicanism in Scotland. The poll tax struggle fed into the establishment of a Scottish parliament which in turn proved to be a step on road to self determination. In 2008 the Scottish Socialist Party organised the first Republican Socialist Convention in Edinburgh with supporters from England, Ireland, Scotland and Wales.

In 2008 the financial and economic crisis has transformed the situation, provoking popular anger and democratic protests and uprisings. In Iceland in 2009 riots and protests produced demands for a new democracy. A constituent assembly was set up to draft a new constitution. By May 2010 the crisis spread to Greece. It took on a new dimension with the protests in Tunisia in December 2010. The Arab spring began as mass democracy movements spread across North Africa and the Middle East. The Egyptian pro-democracy movement organised a mass occupation of Tahrir Square in Cairo.

In 2011 the Arab spring inspired the protests in Spain beginning on ‘15 May’. Various social networks organised with the ‘Real Democracy Now’ [Democracia Real YA] group. In September 2011the Occupy movement began in New York when ‘Occupy Wall Street’ set up camp in Zuccotti Park. The central democratic slogan was “We are the 99%”. By October 2011 the protests spread to 95 cities in 82 countries. The Occupy movement showed that demands for real democracy were not limited to authoritarian regimes but embraced a section of the people disillusioned with liberal democracy.

Occupy London began on 15 October 2011 when a march to the Stock Exchange ended at St Paul’s Cathedral and maintained a ‘permanent’ camp until it was closed by legal action on 28 February 2012. Occupy London organised using a model of consensus democracy developed in the US. The ‘Initial Statement’ agreed by over five hundred people on the steps of St Paul’s has ten points, which begins “The current system is unsustainable. It is undemocratic and unjust. We need alternatives”. The Statement of Autonomy defines Occupy as “a people’s movement….. by the people and for the people” – the same passed by the General Assembly at Occupy Wall Street in November 2011.

Occupy was not a socialist or class based organization. Its ideas of citizen’s activism, direct action and real democracy and slogans about “a people’s movement” should be seen as a new kind of republicanism-from-below. This was extended by the establishment of the People’s Assemblies movement, in the campaign for a new constitution or ‘Agreement of the People’ and in various active citizenship campaigns such as 38 Degrees and UK Uncut.

A republican movement will draw support from all democratic forces, such as those people campaigning for civil liberties, women’s rights, environmentalism, and against racism, fascism, and the imperialist wars. The republic should become the focal point for the democratic aspirations of all who suffer oppression in its many and varied forms. The question is how should working class activists relate to the movement? The answer is that we need a new type of party.

A republican socialist party is the party of working class republicanism. It is the voice of working class activists in the broader democratic movement. The party builds the movement and the movement grows support for the party. This is a new type of party because it aims to unite social democrats and communists into one party. This is a departure from the historic traditions of the British working class since the Russian revolution which divided the left into a Labour Party and a Communist party. More than this, it takes us back to the Leveller party and the Chartist party, which made democracy a priority and fought for it by militant means.

30 October 2013
To submit an article for the 'Discussion & Debate' section of our website please email it to info@leftunity.org

5 responses to “A CASE FOR THE REPUBLICAN SOCIALIST PLATFORM”