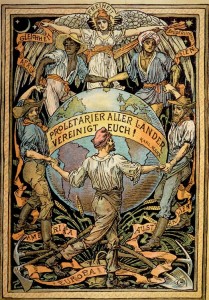 On 6th February, anti-government demonstrations broke out in Tuzla, Bosnia. They were led by workers who had been laid off by the owners of newly privatised factories. Contracts agreed at the time of the state sell-offs stipulated that they were to invest in their companies. Instead, they started stripping the assets and sacking their workers.

Solidarity protests have taken place in Zenica, Bihac and Mostar. By Friday 7th February a government building was on fire in Tuzla and in Sarajevo special forces soldiers used water cannon to drive off protesters trying to storm the presidential residency. Demonstrators had set fire to the building and torched police cars stationed around it. In Zenica, rioters set fire to another government building, chanting “Revolution!” and “Thieves!”.

In Mostar young people held up banners declaring ‘ Politicians, the Youth Revolution Arrives’. Almost 60% of young people in Bosnia Herzegovina are without jobs.

It is hardly surprising these protests started in Tuzla which, with its surrounding region, has a proud working class history that has survived war and nationalist division.

Representatives of 35,000 miners and metal workers in the region stated in 1969, “No worker should be made redundant due to modernisation or the reconstruction of production workshops.”

At the time of the British miners strike in 1984, the 10,000 miners at the Kreka colliery near Tuzla gave up one day’s pay a month for the British miners, an example taken up by other miners across Bosnia and in Croatia.

In 1987 Bosnian miners led the way in calling for an independent trade union and for the setting up of a new communist party.

In Tuzla, Zenica and other working class towns non-ethnic leftist parties won the 1990 election and maintained control of their local governments throughout the war years.

At a 1992 demonstration in Tuzla against growing nationalist divisions a miner addressed the crowd with these words, ‘the only identity we have is as miners.’

Over the next four years the Tudjman and Milosevicregimes embarked on a programme of violent partition as a conscious attempt to destroy anything other than ‘national’ identity. But the working class of Tuzla stood in their way and played a key role defending multi-ethic Bosnia.

The first defeat of the Yugoslav army (JNA) occurred at the beginning of the war in Tuzla and in 1994 the trade union council in that city issued a declaration, ‘In Tuzla the workers firmly support the multi-ethnic nature of the workers movement … The unions have fought throughout the war to help citizens of all nationalities without discrimination … but we cannot continue our resistance to the attacks without international solidarity from the workers of Europe … If multicultural Tuzla is defeated, can any area of Europe be safe from the racists?’

This spirit survived the war. In 1998 the miners union organised an international conference against privatisation, casualisation and unemployment in Tuzla. Miners leader Memis Music called for a new workers party and for the union to ‘transform itself into a united and efficient working class organisation.’

The next days and weeks will see whether the protests which started in Tuzla spreads further through the region and whether that old slogan of ‘unity is strength’ seals the fate of those forces inside and outside the country intent on benefiting from division.

4 responses to “A Bosnian Spring?”