Allan Todd writes: As this year’s May Day – also my birthday!! – approaches, I’m beginning to wonder exactly when the ‘Opposition’ parties will finally say: “Enough is enough!”, as regards persistent and increasingly-flagrant Tory lying, breaches of Ministerial ‘Rules’, crony-corruption, illegality, attacks on democracy and… social murder.

Surely now is the time for Opposition MPs to take a leaf out of the young climate activists’ ‘Fridays For Future’ book and start organising ‘Wednesdays For Withdrawal’, to really highlight Johnson’s lies, corruption, incompetence and undemocratic actions? BEFORE he succeeds in creating a UK version of Orbán’s authoritarian Hungary. 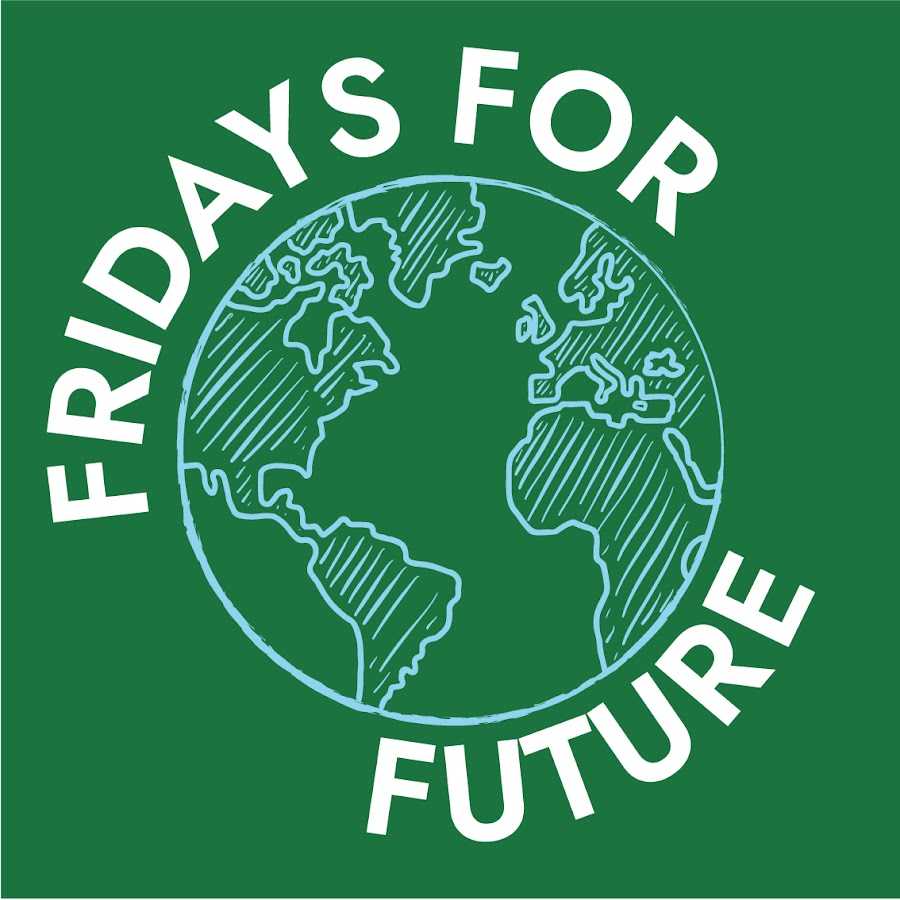 On Politics Live, on 27 April, Jonathan Bartley, Co-Leader of the Green Party, rightly said, concerning Tory sleaze and Johnson’s constant lying: “We may have reached a tipping point where chickens have come home to roost, where people realise he is a serial liar.”

But, given ‘just’ the Tories’ criminal and corrupt mismanagement of the pandemic, haven’t we now reached a stage when Opposition parties should be doing something to ensure that “tipping point” is reached, rather than just continuing with what, in the end, is just spouting hot air? According to the independent Office of National Statistics (ONS), the number of Covid-19 deaths in the UK is now over 150,000, most of which were avoidable.

Surely this appalling statistic alone demands action, not mere words, no matter how right those words are? However, there are, in fact, many more reasons why Opposition parties urgently need to ‘up their game’ – if they genuinely mean what they say.

Bearing the number of Covid-19 deaths in mind, let’s also consider the criminal social murder that poverty and austerity have brought to the UK’s most deprived people and areas. Back in 2019, Professor Philip Alston, a UN Special Rapporteur, said poverty in the UK is “systematic,” “ideological” and tragic”, pointing out that the UK’s social safety net has been “deliberately removed and replaced with a harsh & uncaring ethos”.

In the past few years, we’ve also had reports which actually use the term ‘social murder’ when investigating the links between austerity – a political choice, remember?! – and mortality rates. More recently, such findings have been confirmed by the ONS which, in May 2020, reported that the Covid-19 death-rate in the UK’s poorest areas was 55 deaths per 100,000, compared to 25 per 100,000 in the wealthiest areas. For those – like me! – who are ‘mathematically-challenged’, that means the death-rate for poorer people is MORE than double that of wealthier people. 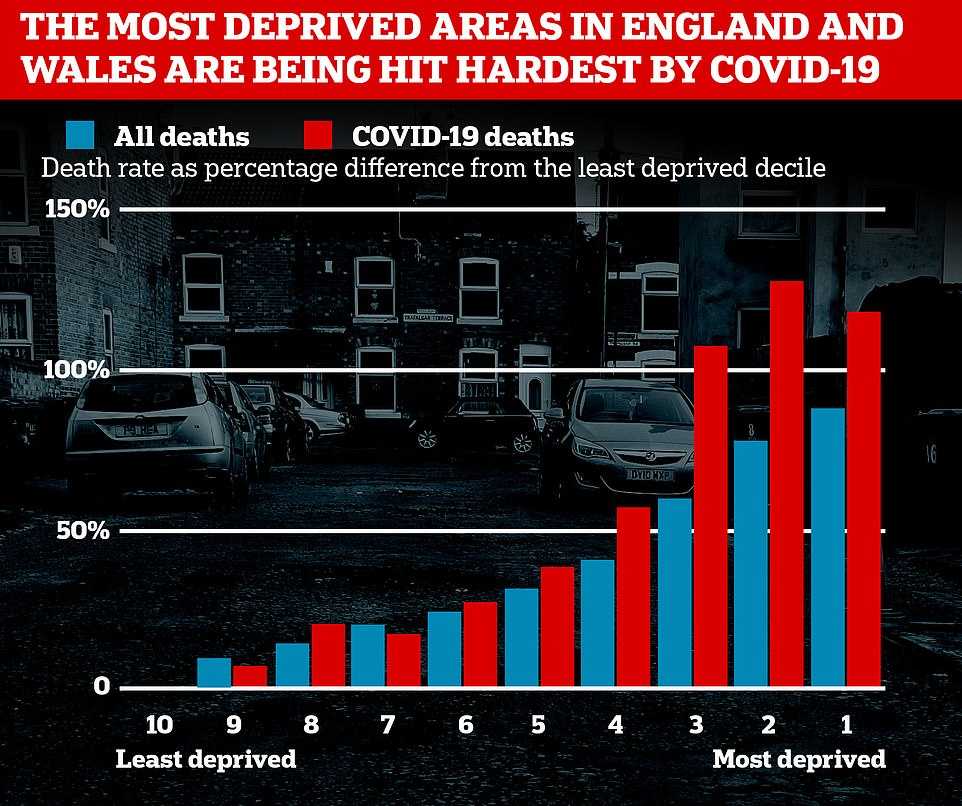 Many Opposition MPs claim to be increasingly concerned about the Tories’ erosion of democracy and the rule of law. This might be a good time to give those MPs a brief History lesson, as Tory attacks on democracy have been taking place for at least six years!

Firstly, there was the MASSIVE Tory election fraud in GE2015 – via overspending in 33 key marginal seats – brilliantly exposed by Channel 4 news: 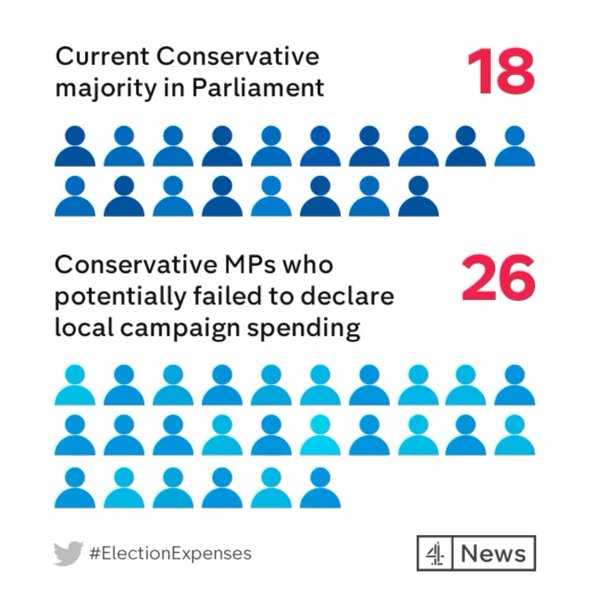 Eventually, in 2016, the Electoral Commission fined the Tories a record £70,000 for “numerous and significant failings” in reporting actual national election expenses – to the tune of £275,000 – and for their slowness in getting documents to them. A dozen police forces sent files to the Crown Prosecution Service (CPS) for Tory breaches of local spending limits via the use of scores of ‘Battlebuses’ in those key marginal seats.

The Tories – clearly presaging Johnson’s lying mantra – passed this off as mere “reporting errors”! Although the CPS only prosecuted one case resulting in a conviction (bizarrely, the MP was allowed to keep his seat!), the final report said there was “evidence of wrongdoing but insufficient evidence to prove, to a criminal standard, that it was intentional or co-ordinated” and that, as local election agents had been told by Tory Central Office that it was legal, the CPS couldn’t prosecute!

What did Opposition MPs do? Not only did they fail to do anything, they even failed to say anything about it – hoping instead that the courts would hold the Tories to account. This silence was particularly disgraceful as regards the Green Party: at its 2016 Spring Conference, I successfully moved an Emergency Motion calling on the party to launch a campaign for by-elections in all fraud seats. It was overwhelmingly passed but the leadership said and did nothing. Had by-elections been forced, we would almost certainly have avoided the Brexit fiasco and the criminal mishandling of the pandemic.

Then, during the 2016 EU Referendum, there was evidence of illegal spending, improper use of social media information and even Russian interference. Also, after GE2017, the Tories were investigated by police over the illegal use of a cold-call centre in Wales, which called thousands of voters in key marginals just weeks before the election, asking for support rather than ‘market research’ – this was also exposed by C4News.

Again, the Opposition parties did nothing – particularly disgraceful, given how close Corbyn’s Labour Party came to winning that election.

During the Brexit votes, Johnson illegally prorogued Parliament and even considered reducing the powers of the Supreme Court when it ruled his actions were illegal. But what did the Opposition parties do? Refuse to disband? Call for mass civil resistance? No – they uttered words, but DID nothing. 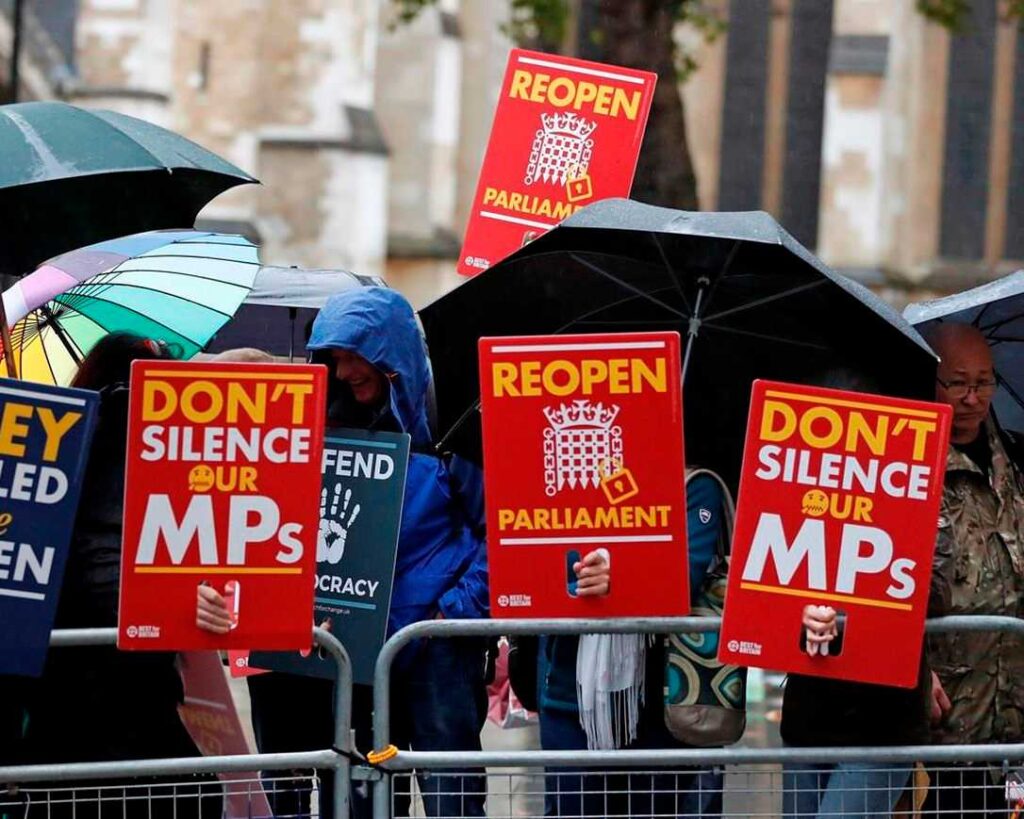 Now, of course, the Tories are hoping to become the permanent government of the UK, once the new electoral boundaries are applied, and they bring in Voter Photo ID – the latter already proven to be a massive ‘voter suppression’ technique as regards younger and poorer people. And, just to ensure there’s no effective protest, their new Police Bill wants to drastically increase police powers relating to peaceful demonstrations and protests. 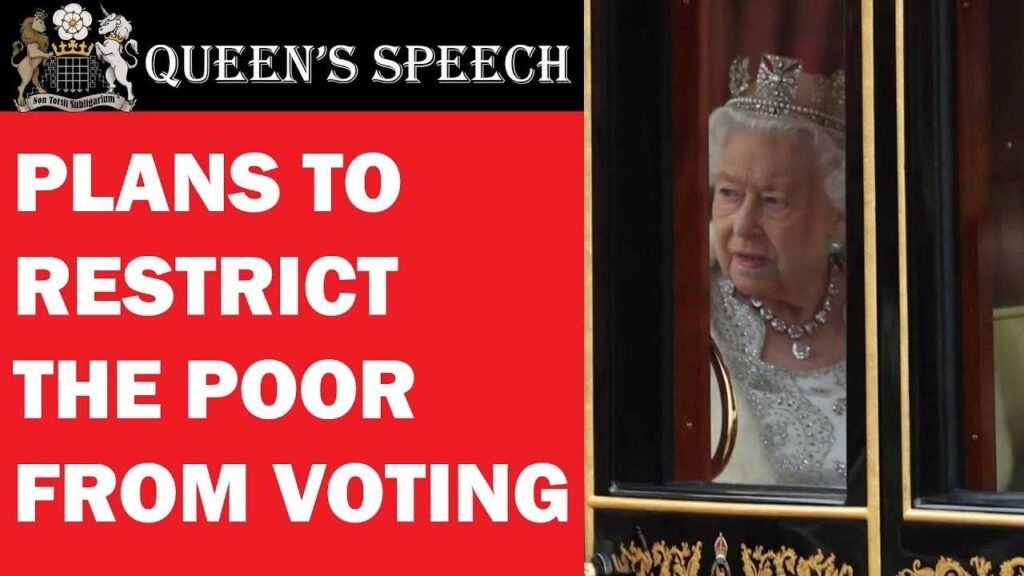 Just when do Opposition MPs and parties think they should actually start to ACT to defend what’s left of UK democracy? As the biggest Opposition party, the main responsibility falls on the Labour Party to do something – or, if Starmer refuses to act, then surely Labour MPs like Jeremy Corbyn, Zarah Sultana and Richard Burgin should be helping to call for and ORGANISE civil resistance? And Caroline Lucas of the Green Party should be working with them.

At present, they’re all behaving like the metaphorical/fabled frog in a saucepan of water, being slowly boiled to death. A real frog would actually jump out – but Opposition MPs currently show no signs of ever wanting to jump out of this toxic Tory saucepan: 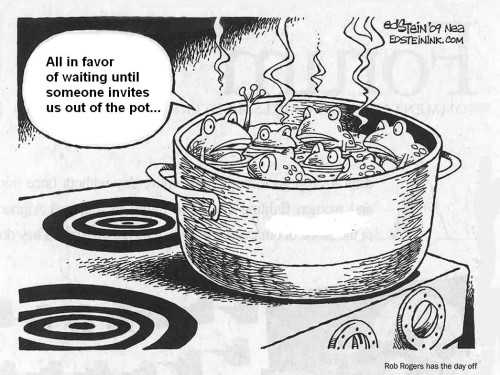 Most recently, Opposition MPs have rightly been calling out the constant lying and the widespread corruption of Johnson and his hard-right Tory cabal. The list is almost endless: using Tory donors’ money to decorate the Downing Street flat in the most ostentatious way; PPE contracts for firms owned by family members or their friends; giving £30billlion+ of taxpayers’ money to firms like Serco and Deloitte who are STILL failing to operate an effective Test and Trace system; paying exorbitant amounts of taxpayers’ money to ‘consultants’; or using contacts to swing taxpayers’ support for dodging businesses owned by ‘chums.’

Time for a new ‘Aventine Secession’

In Italy, in June 1924, following the murder by Fascists of Matteotti, the Socialist leader, 123 Deputies withdrew from the Chamber of Deputies in protest – making it clear they were not prepared to give a fig-leaf of respectability to Mussolini by carrying on with ‘business as usual’. Although it failed to stop Italy’s drift into a fascist dictatorship, at least they tried to do something more than simply calling his actions out.

So…come on, Opposition MPs: this is not a request for you to withdraw completely from the Commons. But surely you can manage ‘Wednesdays For Withdrawal’? Just one day a week? You could withdraw and hold an alternative session in the Methodist Central Hall, Westminster, so you wouldn’t have far to walk!

Even better – you could also call for AND organise mass civil resistance each Wednesday, by calling on people to occupy Parliament Square every Wednesday, until this corrupt and increasingly dangerous government resigns.

It IS possible you know: the people of Iceland did it in 2016, when the leaked Panama Papers showed their PM was corrupt. 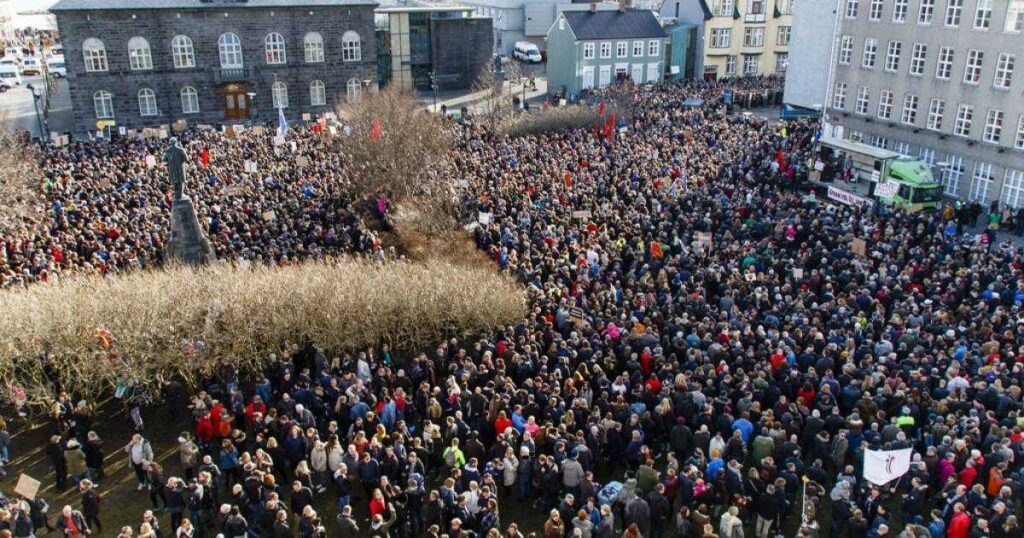 Protests in Iceland, 2016 – which forced their PM to resign

30 April 2021
To submit an article for the 'Discussion & Debate' section of our website please email it to info@leftunity.org