The Return of Nature

Stuck in the wrong Covid-19 Tier, and wondering what kind of a Christmas you and your loved ones will be spending this year?

Well, here’s something to help you and yours get through: the latest book from the acclaimed ecosocialist author, John Bellamy Foster: 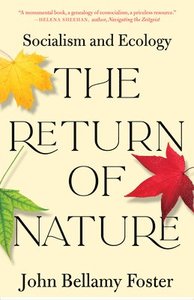 This brilliant book – which traces and establishes the link between socialism and ecology – couldn’t have come at a more appropriate time, given the ever-worsening Climate and Ecological Crises, and the mounting health and economic impacts of the closely-linked Covid-19 pandemic. As a result of these combined crises, more people than ever are accepting the need for some fundamental ‘System Change.’

As well as going back to the early ecological writings of Marx and Engels, the book deals with the important later theoretical contributions made by people such as William Morris. As Peter Critchley put it in his review of The Return of Nature (in Climate and Capitalism, 13/11/20):

“The testimony of the various thinkers gathered in The Return of Nature leads inexorably to the conclusion that the future health, harmony, and flourishing of Earth and humanity lies in a labor-environmentalist fusion that can supplant the capital system with new social forms, integrating sensuous human interaction with nature.”

Basically, and building on his earlier work, Foster coherently establishes – for those still not convinced – the close connection between socialism and ecology which we know now as ecosocialism. In the late 1970s and early 1980s, people such as Rudolf Bahro and Raymond Williams were writing about what they called ‘ecological socialism.’

In particular, Foster makes clear that the 20th century forms of socialism – in one way or another – do not offer a way a sustainable way forward with which to end the ‘metabolic rift’ between humans and nature which Marx saw capitalism creating. In its place, Foster argues for a global ecologically sensitive socialism which, now more than ever, is vital for the world, if we are to stop the destruction and pollution created by capitalism and, instead, restore a harmonious and sustainable relationship with nature as a whole.

As Foster himself says:

“What we must dethrone today is the idol of capital itself, the concentrated power of class-based avarice, which now imperils the ecology of the Earth. It is this that constitutes the entire meaning of freedom as necessity and the return of nature in our time.”

The book has had some brilliant reviews from the world’s leading ecosocialists:

“In the century following Marx’s death, left-wing scientists and writers made major contributions to the development of modern ecological thought. Foster’s brilliant new book recovers that history, making the work and ideas of those neglected ecosocialist pioneers accessible to the activists who are building today’s movements against global environmental destruction.”

“What does ecology have to do with a critique of capitalism and a movement for socialism? What are the roots of ecosocialism? For more than twenty years, John Bellamy Foster has engaged in serious thought and massive research, delving into the relation of ecology and socialism, while charting the odyssey of the network of left activist-intellectuals who forged a philosophical-scientific-political vision of our ecosystem and the forces threatening its survival. The result is a monumental book, a genealogy of ecosocialism, a priceless resource for those pursuing this path today.”

[Helena Sheehan, author, Marxism and the Philosophy of Science and Navigating the Zeitgeist]

“By now, many people will have heard about the ecological ideas of Karl Marx. And everyone knows that the modern environmental movement is filled with anti-capitalist energies. But was there anything in between? In this landmark work, John Bellamy Foster fills in the gap and reconstructs an unbroken genealogy of dialectical thinking about the environment, from the last days of Marx to the first stirrings of Western environmentalism. From the neglected writings of numerous thinkers and scientists—evolutionary biologists, not the least—he reconstructs a treasure trove of ecological insights that will keep scholars and activists preoccupied for years to come. The common knowledge of Marx’s environmentalist leanings derives from Foster’s Marx’s Ecology from 2000. With The Return of Nature, he has given ecological Marxism an epic chronicle that speaks straight to the crises of our times: a sequel and prequel of extraordinary power.”

[Andreas Malm, author, Fossil Capital: On the Rise of Steam Power and the Roots of Global Warming]

“This magisterial work of profound importance draws on an immense amount of historical source material to provide a coherent and accessible account of the co-evolution of ideas on socialism and ecology from the nineteenth to the mid-twentieth century. It is an impressive, indeed, incredible study.”

“Editor of Monthly Review and one of the main thinkers of the North American ecological left, John Bellamy Foster offers in this monumental book a fascinating genealogy of ecosocialism, via a synthesis of scientific and artistic critiques of capitalism, developed in United Kingdom between the end of the 19th century and the 1960s. Starting from the writings of Friedrich Engels, and the work, much less known, of the “left Darwinist” (and friend of Marx) Edwin R. Lankester, Foster analyzes in particular the works of writer William Morris and great left-wing scientists: physicist John Desmond Bernal, geneticist John B. S. Haldane, and biochemist and sinologist Joseph Needham. Clearly, during the 1940s and 1950s, some scholars close to the English Communist movement fell into the trap of a scientistic and modernist conception of progress. However, despite their obvious differences, all shared a socialist and ecological commitment, and a dialectical conception of the interpenetration between nature and society.”

So… buy the book for yourself, AND for all your loved ones, including teenagers, and get everyone to read it! Then – either physically, or via Skype or Zoom – have a discussion about the book. And then start the New Year campaigning hard to make sure we push COP26 to set an agenda that will at least start us on the road we need to travel.

BUT… don’t buy it from greedy, tax-dodging capitalist firms like Amazon!! If you can wait – and pay the extra postage from the US – order it from the publishers, Monthly Review.

Otherwise, buy it from a left-wing bookshop – or from your local bookshop.

Happy Reading – and Happy Discussions – over this year’s Winter Solstice!

28 November 2020
To submit an article for the 'Discussion & Debate' section of our website please email it to info@leftunity.org

2 responses to “The Return of Nature”