The NHS is being failed by Government: Yorkshire March for the NHS Leeds 2nd July 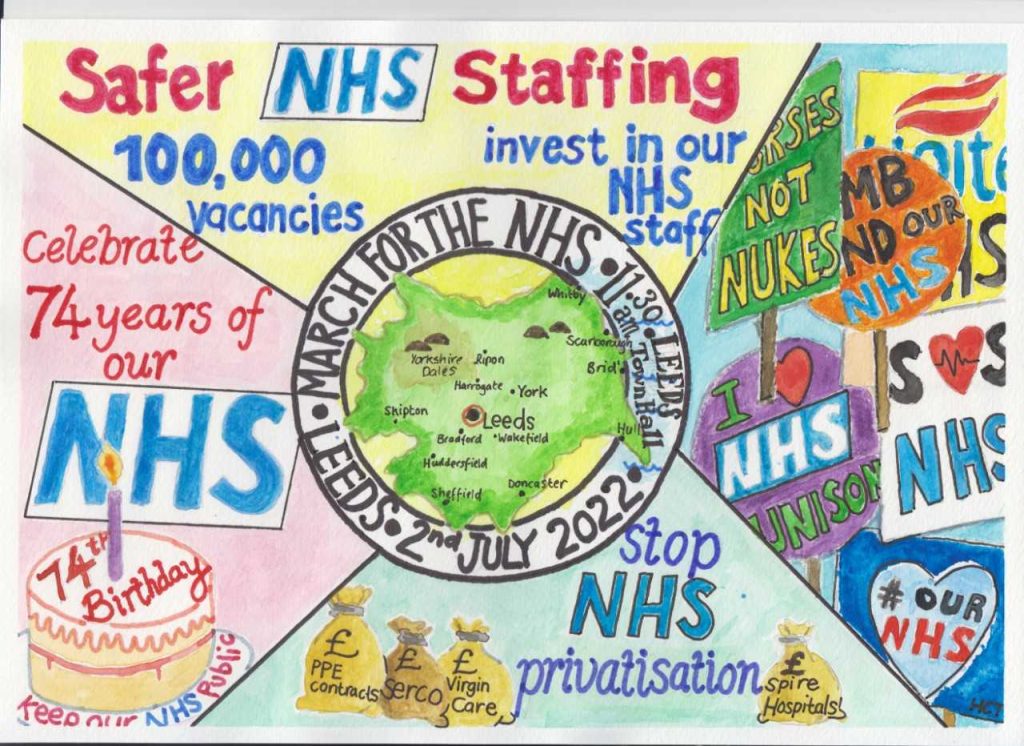 Nick Jones writes: Unions are uniting for the Yorkshire march for the NHS in Leeds. Union support and donations have come in from Regional TUC, GMB, UNITE, UNISON, Educators’ union NEU, Teachers’ union NASUWT, Fire Brigade FBU, NUM, Rail workers RMT, trades councils across Yorkshire. The march comes at a crucial time – we must defend health and social care workers and demand funding for the NHS.

Waiting lists and waiting times in hospital accident and emergency wards (A&E) have been growing for years and pre-date the Covid pandemic. 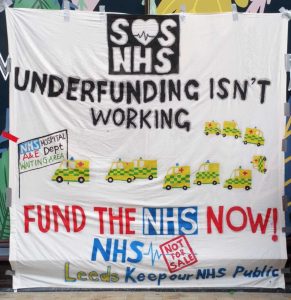 Instead of increasing funding for the NHS in real terms, the Chancellor Rishi Sunak doubled the efficiency savings target to an impossible 2.2% or an estimated £4.75 billion a year1.

This is incredible with energy bills rising, the cost-of-living increases and the highest inflation for decades. It means cuts in real terms.

Currently, the only eight projects out of the 48 promised new hospitals that might possibly have been funded with the £2.7bn made available are all stalled as the Treasury seeks to reduce public sector spending.

The new Integrated Care Systems are going to start with a collective financial deficit of around £4 billion. According to the Health Service Journal, the West Yorkshire NHS Integrated Care Board may face a deficit of £73 million in their initial estimate of the Board’s Operational Plan2.

We are concerned that efficiency savings and surging inflation will jeopardise the Leeds Children’s Hospital and ambulatory adult care wing project.

The original estimate for the project was £600 million and the Leeds Teaching Hospitals Trust has been required to resubmit revised plans that will cost no more than £400 million.

It is clear that the NHS needs urgent assistance:

Leeds Keep Our NHS Public has organised a march on July 2nd to call for funding including the promised new hospitals, together with pay justice for staff and to celebrate the 74th anniversary of the NHS. The march will assemble outside the Town Hall at 11.30, and will be led by a samba band and conclude with short speeches from NHS staff and others. All are welcome.

2 Don’t expect too much from West Yorkshire NHS, new “Integrated Care Board” warns public – Calderdale and Kirklees 999 Call for the NHS (wordpress.com)

One response to “The NHS is being failed by Government: Yorkshire March for the NHS Leeds 2nd July”